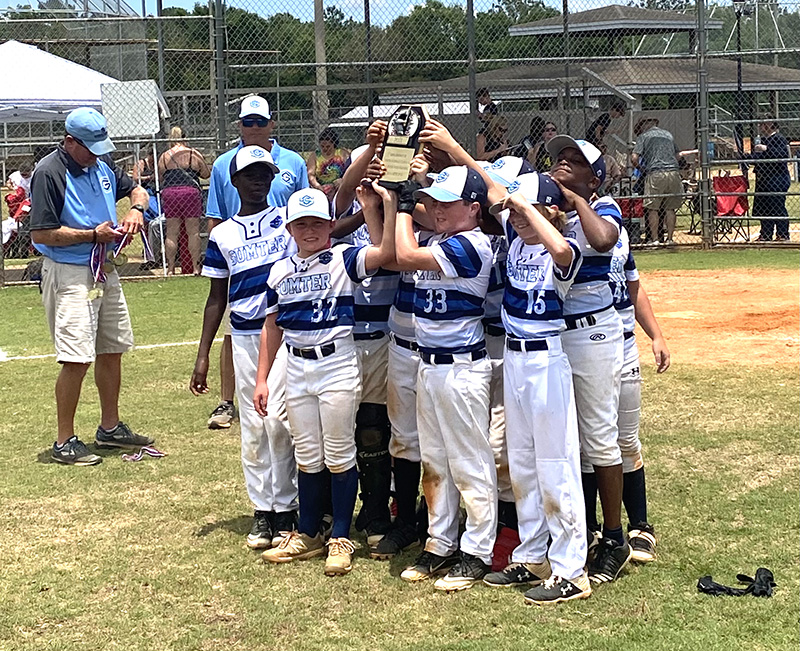 The Sumter County 10U All-Stars celebrate with their first place plaque after defeating the Moultrie 10U All-Stars to win the GRPA District 3 Tournament. Photo by Ken Gustafson

AMERICUS – The Sumter County 10U All-Star Baseball Team defeated the Mitchell County All-Stars 9-1 and then followed that up with an 8-0 shutout of the Moultrie 10U All-Stars to clinch the Georgia Recreation and Parks Association (GRPA) District 3 Tournament title at the Sumter County Parks and Recreation Department (SCPRD) baseball complex on Saturday, June 5.

Being that Sumter County will be hosting the GRPA 10U State Tournament this coming weekend, the Sumter County All-Stars are guaranteed a spot in the state tournament, but they were able to earn it on the field as well in the District 3 Tournament.

“We did not hit the ball as well as we can, but I thought our guys played a great tournament defensively,” SC 10U All-Stars Head Coach Mike Reeves said. “They made the plays when we needed them. These players have really bought in to doing the small things to win ball games.” 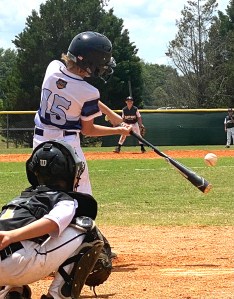 In SC’s first game against Mitchell County, SC third baseman Clayton Hicks powered the SC offense by going 2 for 2 with a triple, three RBIs and two runs scored. Seven other SC players came up hits in this game to help the SC cause.

SC jumped out to a 7-0 lead early in the bottom of the first. Matthew Owens reached on an error to start things off. Then David Guest and Vincent Kearse came up with back-to-back singles to load the bases for Hicks. Hicks responded with a three-run triple and Mason Dowdy was able to drive Hicks in on an RBI single to give SC a 4-0 lead. Later on in the inning, Noah Hosely reached on an error that allowed two more runs to score and Gage Norman would later drive in SC’s seventh run of the game on an RBI single. 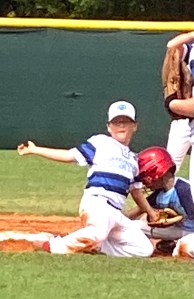 Sumter County second baseman Gage Norman tries to tag out runner as he slides into second base.
Photo by Ken Gustafson

Mitchell County responded with their only run of the game in the top of the second, but the Sumter All-Stars countered with a run in the bottom of the third. Hicks led off the frame with a single, but advanced all the way around to third on an error. Dowdy popped out to first for the first out, but Christian Blanchard was able to drive in Hicks on a fielder’s choice to make it 8-1 Sumter County.

The SC All-Stars tacked on their final run of the game in the bottom of the fourth when Malik Paul hit an inside-the-park home run.

In Game 2 against the Moultrie 10U All-Stars, SC used a five-run fifth inning to salt away an 8-0 victory. Sumter County was able to score eight runs on 13 hits as right fielder Vincent Kearse went 3 for 3 at the plate with a triple, a double, two runs scored and an RBI to lead the offensive attack. Both Asher Bishop and Noah Hosely also had strong outings at the plate as both of them went 2 for 2. 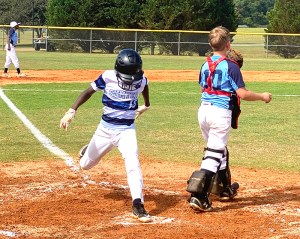 SC took a 1-0 lead in the bottom of the first. Kearse belted his triple with two outs and was able to score when Hicks reached on an error. Sumter County then added runs in the second and fourth innings before exploding four five runs on five hits in the fifth. Owens was able to drive in a run on an RBI single and David Guest followed that up with a two-run triple. The final run of the game came when Kearse drove in Guest on an RBI single.

In addition to the multiple-hit performances of Kearse and Guest, Drew Reeves also had a solid game at the plate. He went 2 for 2 with two singles and scored a run. 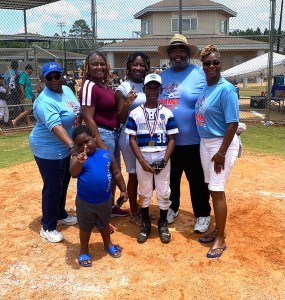 “Our team philosophy this year has been to “MAKE A PLAY”. Our definition of making a play is having a good at bat, making a play in the field, backing up bases, running the bases well, etc,” Coach Reeves said. “We are going to spend the next week or so working on the fundamentals. This is a great group of kids who really compete well and enjoy the game of baseball.”

The GRPA 10U State Tournament will take place at the SCPRD baseball complex Tuesday through Saturday, June 22-26.