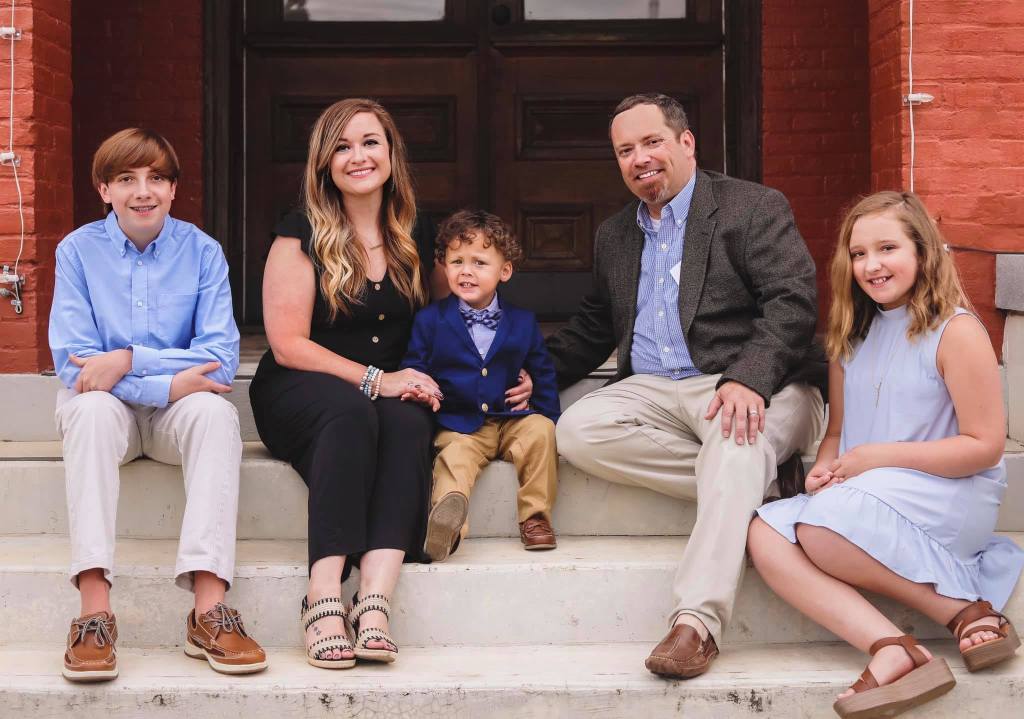 Blake Dukes has what it takes. You want him in your circle. In fact, he is one of those men who doesn’t wait for an invitation. He is one of those who knows to show up with his talents to make your life a bit easier, a bit lighter, a bit richer. Blake shows up right where he is needed at the perfect time. He is particularly good at showing up on behalf of children and families. You can find him coaching, taking the lead on camp programs, being involved in his church home, in our community and offering aid to neighbors and strangers alike in the name of making life better. Blake is an awesome neighbor because his investment isn’t dependent upon numbers. For Blake, the one is just as great as the many.

Blake is a man designed to lead and he does it knowing he has a firm foundation to stand upon. Blake and his wife of 18 years, Cadie, are leaders of their greatest mission: the Dukes family. Cadie says of Blake, “There’s no one else that I’d rather walk through this life with than Blake. He’s not perfect, but he’s perfect for our children and me. He’s protective, encouraging, and loves us fiercely. He is straightforward and disciplined. He’s involved in many community aspects, but he doesn’t do anything for attention and honestly doesn’t like to be recognized.” Along with Cadie and Blake, Maddox, 14, Reagan, 12 and now little Liam, 2, who was adopted in May, make up the Dukes home. But there are many spots at the table for others who they call family. Cadie has been passionate about family since she began dreaming in her young days.  As Cadie reports, “In the 5th grade my best friend and I planned to build orphanages and homeless centers when we got older. Life happened and plans changed. In 2012, Haiti became such a special place to me as I went on my first mission trip outside the USA. It’s where God confirmed the calling to adopt. I was a complete wreck when I returned from that first trip. A year later, Blake went to Haiti and knew as well. In 2016, we started the paperwork to adopt from China. We stopped after feeling led to foster and adopt through the state.” Blake reports he and Cadie would speak of the options for their family over the life of their marriage. While Cadie may have been dreaming at a younger age, Blake would later join her in the dream. After they both had been on separate mission trips in Haiti, their hearts became more tender towards extending the Dukes family. Blake leans on his faith and his understanding of Christ’s words for encouragement. “He specifically says we are to take care of the orphans and the widows. It is a “no question” for us. We got involved because of Haiti, and the draw of the Lord saying we can make a difference. It sounds cliché, but there is a saying, ‘you may not change the world, but you can change the world for one child.’ If that doesn’t make your eyes sweat a little bit, there is nothing I can tell you that’s going to change your mind.” 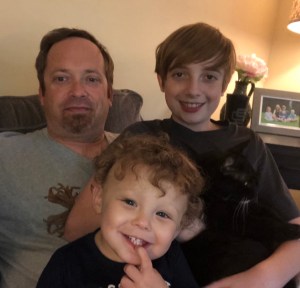 Blake and sons, Maddox and Liam 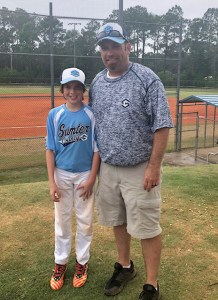 Dukes boys are often found on the ball field, Maddox and Blake

The Dukes took on a new adventure. Deciding to follow through on the call to open their home to children in need, they began the process, one tentative step at a time. Blake admits the process to become ready to house children went a lot slower than he would like, but within 2 years, the Dukes were ready to provide a foster home. The Dukes’ official status is as a “foster to adopt” family. This status is indicative of their intention to foster children with the option of adoption being on the table. The Dukes prepare themselves for the call which asks them to open their home. The call comes, often in a night of desperation. A child would need a home within the hour and the Dukes learned to live at a level of preparedness which allows a traumatized child the best chance of finding a sense of normalcy. While such a talent is a rarity in adults, for younger children a special effort is required. Reagan and Maddox, lead by their parents, would prove to handle their home being opened to strangers with an unique grace. Blake offers that Reagan’s hospitality looks much like his, while Maddox tends to follow more closely in line with Cadie. Together, the four offer a great combination which enables the Dukes to provide an unconditional love while also trusting their hearts will be protected if and when a child leaves the Dukes’ home. Blake doesn’t downplay the pain of loving a child only to have them move on to another option. He reports there is heartbreak, that the quietness of the home can be haunting after they leave. However, the pain is not greater than the calling to do it again in the name of what they know to be God’s will for their life. “It hurts but it also hurts that there are kids out there that don’t have a family. That’s why we do it.” 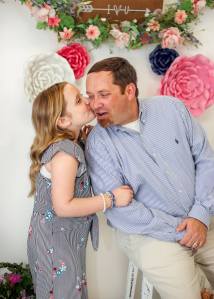 Blake with his beautiful daughter, Reagan 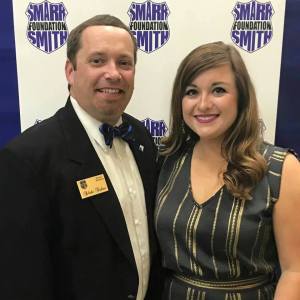 Cadie and Blake Dukes at a Smarr Smith Foundation event. Blake served as president for the foundation in 2020.

Little Liam Dukes showed up much like many of the children the Dukes welcome into their home, with an hour’s notice and a need for the Dukes to be remarkably steady in the most unsteady of circumstances. Liam would eventually become the third child the Dukes considered for adoption. Liam was 4 months old and as the days progressed the bond between him and the other Dukes became stronger and stronger. Finally, two years later, Liam made the Dukes a family of 5. The journey is not as easy as getting to know someone. Adopting comes with exceptionally highs and lows and knowing how to live through the emotions demands a special dedication and motivation. 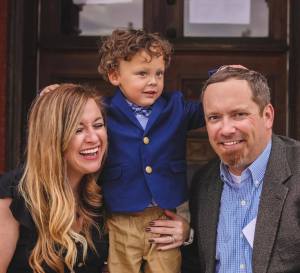 Blake is motivated by ensuring kids have a father to learn from. His dedication is not limited to his children. He carries an ache to see every child have the benefit of a father. Blake can often be found investing in the lives of youth. He has found an outlet for this through coaching and through leadership for youth ministries in his home church of Central Baptist. Cadie reports, “The roles he’s taken on have pushed him far out of his comfort zone. He does what he believes he’s called to do when God opens doors. Blake steps in to fill gaps because he’s determined to make a difference. He wants others to know they’re loved and cared about.” The mission fathers carry out in the home are vital to Blake. Blake reports, “Fatherless homes keep repeating themselves. It is not going to get better. If I want this world to be a better place when I leave it, if I want to make a mark on this world there is no better way than putting the Lord in the heart of these kids. Hopefully through planting seeds, fostering or whatever I do for kids, I’m enriching the next generation so when I do leave this world, I have left a dent.”

Blake is not investing his time in vain. Research bears out the fact we are suffering for lack of fathers in the home. As sited by National Fatherhood Initiative, “There is a crisis in America. According to the U.S. Census Bureau, 18.3 million children, 1 in 4, live without a biological, step, or adoptive father in the home. Consequently, there is a “father factor” in nearly all of the societal ills facing America today. Research shows when a child grows up in a father-absent home, he or she is four times more likely to live in poverty, more likely to suffer emotional and behavioral problems, are at two times a greater risk of infant mortality, and more likely to go to prison.” Blake is passionate about the power of a father in the home. “We need more fathers in the house. That is where all this starts. Cadie sees it as a teacher. Fatherlessness will repeat itself for generations. I will stand and die on that hill. We need more fathers in the home.” Blake stands in the tradition of other men who see fatherhood as their mission field. While making Liam a Dukes, he would stand upon the shoulders of men who provided for him an example, starting with his own father and grandfather. He doesn’t limit his influences to those who he shares a blood relationship. He refers to others in his life as well.  “John Minor is a big ole humongous man who can be intimidating until you meet him, but what a wealth of knowledge he has. Twenty years from now I’d love to hear somebody say that about me. The Sunday we made it official (adoption of Liam) at church he gave me a big hug, shook my hand and said, ‘Man I’ve never been prouder of you’, and that stuck.” In addition to John Minor, Blake also mentions John McNeil, “John’s son, Jess, follows in his footsteps, and Jess’ sons will follow his example. If you look at the circle of fatherhood, either you got one who will pass it on or you’re without a father and a vicious cycle of fatherlessness can start.” In addition to these two men, Blake found strength in the five men making up the pastoral staff at Central Baptist.  “Our five pastoral staff have walked this journey with us from the very beginning. They have cried with us and been upset with us. There have been times I called in the middle of night, saying, ‘I need some help, where do I go from here?’ Then, when we finalized (Liam’s adoption), all five showed up. They love the Lord and love kids, and they were all willing to get in trench with you.” If you also have a passion for families but it does not manifest itself in a desire to foster or adopt, Blake understands.  Fostering and adopting is “not for everybody. But for those who have friends who are fostering and adopting—support them–a night of babysitting, a couple nights of meals. There are some times it is heavy and you just need a break. Just be there for them. That’s the biggest advice I have, be there. I say that in general, for any circumstance. Be there. You don’t have to say or bring anything, but be there.” 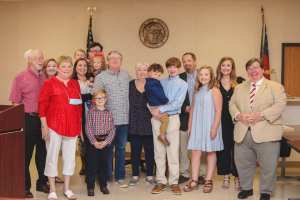 Yes indeed, Blake Dukes has what it takes. It is a joy to celebrate Blake and other men who very intentionally heed “be there” as a way of life. You are very much needed. You are very much adored. On behalf of the Americus Times-Recorder, happiest of a Father’s Day celebration to all the men who step up to love the people who sit at their table. Congratulations to the Dukes family, party of five!