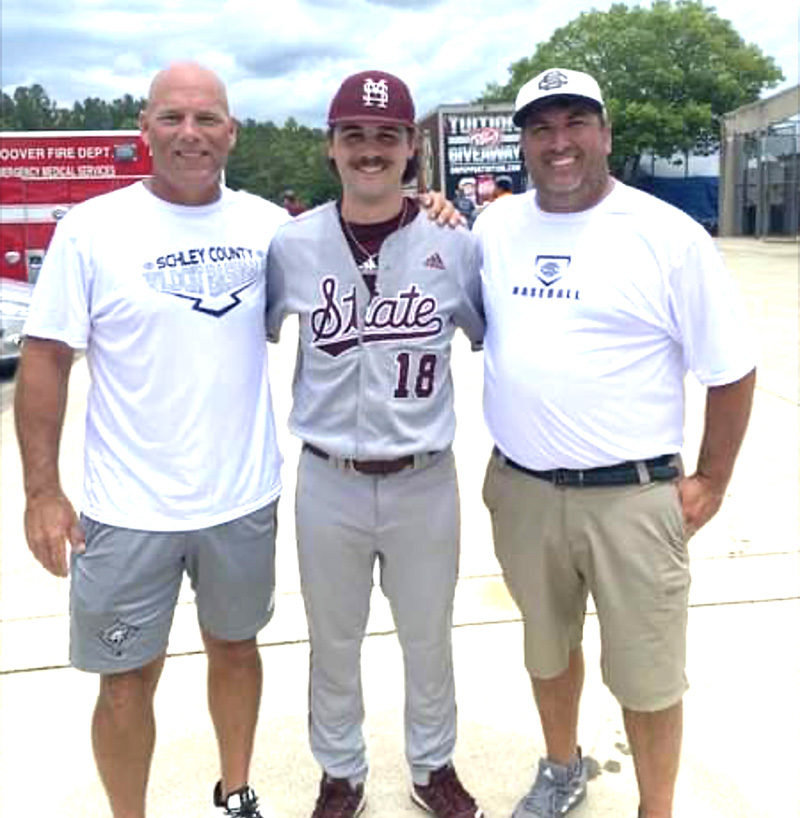 The Bulldogs punched their ticket to Omaha by beating Notre Dame 11-7 to take the best-of-three game Super Regional in Starkeville, MS. In Game 1 of the Super Regional, the Bulldogs defeated the Fighting Irish 9-8 and Patrick, who is used primarily as a reliever, came into the game in the fourth inning to relieve MSU starter Will Bednar. In 1.1 innings of work, Patrick gave up three runs on three hits, walked one batter and struck out another.

For Patrick, being able to compete in the College World Series is the culmination of 17 years of hard work and a passionate love for the game. According to his father, John Patrick, the younger Patrick is ready for the work force, being that he has already earned degree in Business Management, but he’s not convinced that his son is ready to hang it up just yet after this season, especially considering the fact that Patrick has another year of eligibility due to the COVID-19 Pandemic.

“He’s at a point now where he’s probably on the fence of playing again,” John Patrick said. “But I don’t foresee him not playing because he does love the game tremendously. I can remember when he was growing up, we’d go away for tournaments and he’d get upset about missing a birthday party for one of his friends or something. I’d say ‘Well, if you don’t want to play, that’s fine. We’ll just tell them before the weekend. We don’t need to tell them at the last minute and then you can go to another birthday party or whatever you want to do.’ He’d say, ‘No, I’m going to go play’. He’s always made that choice to do it. It wasn’t that we pushed him. It was always his choice.”

Patrick was a member of the two Schley County teams that won the GHSA Class A-Public State Championship in 2015 and 2017. During his time at SCHS, Patrick was selected as the team captain and was voted the team MVP during his senior year. He earned Second Team All-Region honors by Perfect Game as a senior and earned All-America honors from Perfect Game as a junior. Patrick was also voted the Most Valuable Pitcher at the World Wood Bat Association Freshman World Championships in 2013. In addition to those accolades, Patrick was a three–time first-team all-state performer and earned Region Pitcher of the Year honors as a senior. During his senior year, Patrick posted a W-L record of 7-0 with one save and had an ERA of 1.02 with 93 strikeouts in 63 innings pitched.

After high school, Patrick signed with Chattahoochee Valley Community College in Phenix City, AL. During his freshman year at CVCC, Patrick appeared in 17 games and had seven starts on the hill. In six of those starts, he allowed three or fewer runs and led the Pirates to five wins in five of those starts. He also pitched a complete game in which he struck out seven batters against Coastal Alabama-North CC. During his freshman season at CVCC, the Pirates made it all the way to the NJCAA College World Series.

So far, as a Mississippi State Bulldog, Patrick has had a solid career in Starkeville. He appeared in only four games in 2020 due to the season being cut short by the pandemic, but in 2021, he has posted an ERA of 2.13. In the 16 games that he’s pitched, Patrick has amassed a total of nine strikeouts and five walks over 12.2 innings pitched.

For Patrick, getting to the CWS is a dream come true.

“I had always thought about it and wished it would happen, but for it to become a reality is still unbelievable to me,” Patrick said. “It’s tough enough as it is to be a part of a Division 1 SEC team, but to be a part of the team that is College World Series level is something I really never completely believed would be possible.”

This year has been extremely rewarding for Patrick and his teammates in light of the fact that the Bulldogs, along with every other college baseball team, could not compete in 2020 because of the pandemic. According to Patrick, things seemed to be getting back to normal, as far as the 2021 season was concerned.

“This year actually has not been too much of a roller coaster,” Patrick said. “From the beginning, we were already a top 5 ranked team in the nation. We started off playing in Texas at Globe Life field against three other top ranked teams in the country: Texas, TCU, and Texas Tech. We did really well that weekend and from then, I knew we were a top-level team. There were a few bumps through the season, like getting swept by Arkansas and having Missouri take two from us at home, but other than that, we have been fairly dominant all around.”

Patrick has already earned his degree in Business Management, but does have another year of eligibility thanks to the extra year granted by the NCAA due to the pandemic. There is also a possibility that Patrick could be drafted in the upcoming MLB Draft, but as much as he loves baseball, he believes that at this time, it is time for him to move on to something else. “I actually plan to forgo my last year of eligibility as I have graduated from Mississippi State now,” Patrick said. “I could use it, but I am planning on a new chapter in my life and new things for me to begin. Obviously as a kid and throughout my career, I have been hopeful of going through the draft and maybe playing some in the minor leagues, but as of right now, I am not planning to or hoping for going through the draft.”

Patrick says that he is looking forward to taking a couple of years away from baseball and spending more time with his girlfriend, who is working towards getting her medical degree, but is also interested in getting into finance and possibly coaching.

“One thing I would like to do though is getting into the finance/Stocks business and maybe becoming a stock broker,” Patrick said. “One day, if it ever works out, I may become a coach, but that is years away from right now.”

While the financial and coaching worlds may come calling for Patrick down the road, at this moment, he is enjoying the moment and is getting prepared to help his team win a national championship.

The Bulldogs begin the CWS on Sunday, June 20, when they take on the Texas Longhorns in their first CWS game. First pitch is scheduled for 7 p.m.