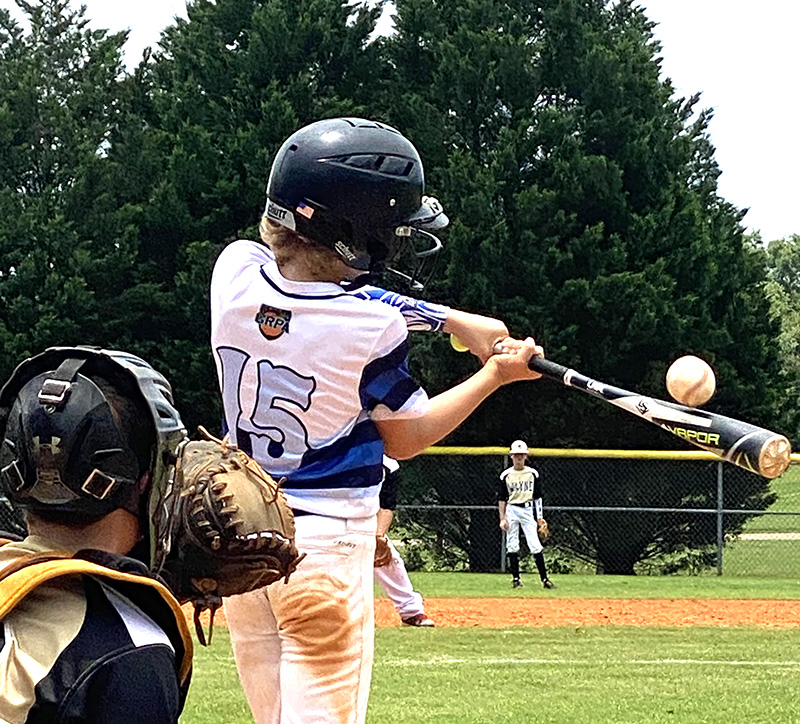 Sumter County 10U All-Stars centerfielder Matthew Owens went 1 for 3 with an RBI single and scored a run to help the SC Bomb Squad defeat Colquitt County 11-0 at the GRPA State Tournament. Photo by Ken Gustafson

AMERICUS – The 10U Sumter County All-Star Baseball Team, known affectionately as the “SC Bomb Squad”, got off to a great start by winning two of their first three games at the Georgia Recreation and Parks Association (GRPA) 10U Machine Pitch State Tournament on Wednesday, June 23 at the Sumter County Parks and Recreation Department (SCPRD) baseball complex here in Americus.

The SC Bomb Squad opened the tournament with an 11-0 win over the South Bryan County All-Stars, but lost to a tough Wayne County team by the score of 8-3 in its second game. However, the squad rebounded like champions by shutting out Colquitt County 11-0 in Game 3 to keep alive their hopes of winning the state championship.

“The first game was probably the best game we’ve played all year,” Sumter County Head Coach Mike Reeves said. “We played great defense and got good, timely hitting. In the second game against Wayne County, the game that we lost, we just got out hit. We played good. Wayne County played good, credit to them. We came back and played this Colquitt County team and we played our game.” 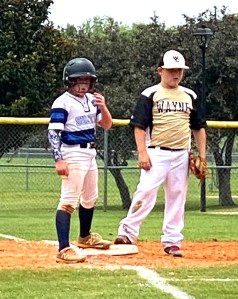 Sumter County’s David Guest stands at third base after belting a double to right field and advancing to third base on a single by Vincent Kearse in the team’s 8-3 loss to Wayne County.
Photo by Ken Gustafson

In their win over South Bryan County in Game 1, the SC Bomb Squad had four players turn out multi-hit performances. David Guest, Mason Dowdey, Noah Hosley and Gage Norman each had two hits in the game to lead the Bomb Squad’s attack. Dowdey led the team in RBIs in Game 1 with three and both Guest and third baseman Clay Hicks scored three runs in the contest. Hicks went 1 for 3 against South Bryan County and drove in two RBIs. In total, the boys from Sumter County scored 11 runs on 10 hits and took advantage of six errors committed by South Bryan County.

The squad’s opponent in Game 2, Wayne County (WC), proved to be a much tougher foe. Sumter County got off to a good start by scoring three runs in the bottom of the first inning. Hicks drove in the first run of the game on an RBI single and Christian Blanchard was able to put the ball in play and reach on an error that allowed two more runs to score. However, as far as offense was concerned, that would all for Sumter County as Wayne County scored two in the fourth, three in the fifth and three more runs in the sixth to defeat the squad 8-3.

Sumter County Catcher Asher Bishop went 2 for 2 with a run scored and an RBI to help led his team to an 11-0 victory over Colquitt County.
Photo by Ken Gustafson

Guest had another solid game at the plate by going 2 for 3 with a double, a single and a run scored. However, the squad could only muster six hits in this game, while Wayne County pounded out 12 hits. WC also took advantage of five errors committed by Sumter County.

Facing elimination with another loss, the Sumter County All-Stars found a way to rebound from that setback with an 11-0 win over Colquitt County in their third game of the day. SC took control of the game early by scoring six runs on six hits and taking advantage of two errors. Christian Blanchard, Asher Bishop and Noah Hosely each drove in runs on RBI singles to make the score 3-0 in favor of SC, and Drew Reeves drove in two more runs on an RBI single to give the Bomb Squad a 5-0 lead. Matthew Owens then finished off the six-run explosion in the second inning with an RBI single. SC would go on to add two runs in the third and three more in the fourth to complete the 11-0 shutout of Colquitt County.

Blanchard, Hosely, Bishop and Reeves each had two hits in the contest and both Blanchard and Reeves drove in two RBIs. 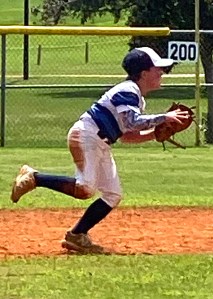 The 10U Sumter County All-Stars will try to continue their quest for a GRPA state championship when they play the Swainsboro All-Stars on Thursday, June 24 at 12:30 p.m.