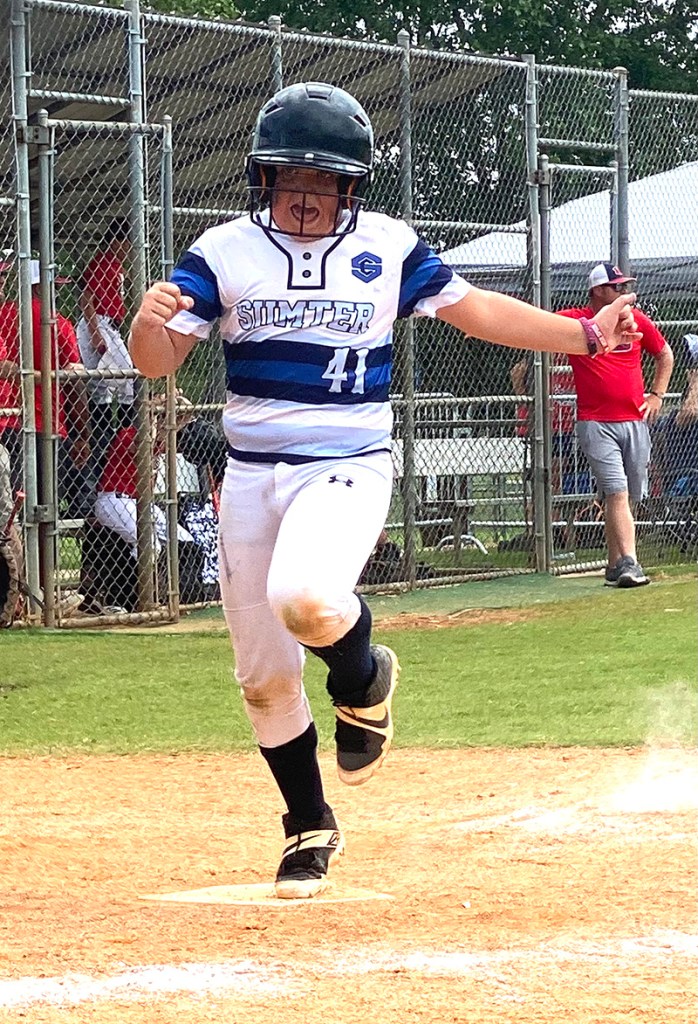 Sumter County Left Fielder Mason Dowdey scores the winning run for the 10U Sumter County All-Stars when his teammate, Christian Blanchard, drove him in from third base on a walk-off single to give SC a 5-4 victory over the Lyons, GA All-Stars in extra innings. Photo by Ken Gustafson

AMERICUS – It has been said that sports doesn’t build character. It reveals character. On Thursday afternoon, June 24, the character of the 10U Sumter County All-Star Baseball Team (known as the SC Bomb Squad) was shown to be the type made of an iron will to overcome adversity. With the score tied at 4-4 in bottom of the eighth inning between SC and the Lyons, GA All-Stars, the Bomb Squad rose to the occasion. With one out and runners at second and third, SC first baseman Christian Blanchard drilled a walk-off RBI single into right field to complete SC’s 5-4 come-from-behind victory over Lyons and secured a spot among the final three teams left in the Georgia Recreation and Parks Association (GRPA) 10U Machine Pitch State Tournament.

“It was one of those games where it was close for the whole game,” SC Head Coach Mike Reeves said. “We got the hits where we needed to there at the end. We’ve got a group of guys, like I’ve said before, that just don’t quit. Their main goal is to win the state championship and win every game we play this whole year and we hope to do that again tomorrow.” 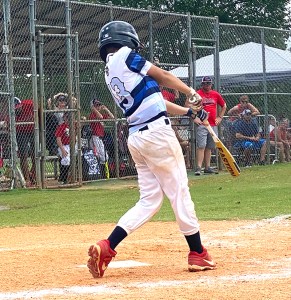 Sumter County 10U All-Stars first baseman Christian Blanchard drove in the winning run on a walk-off single in the bottom of the eighth inning to give his team a 5-4 victory over the Lyons All-Stars in the semifinals of the GRPA State Tournament.
Photo by Ken Gustafson

Blanchard’s walk-off single was the second of his two hits in the game as he went 2 for 4 and drove in three runs. In addition to Blanchard’s multi-hit performance against Lyons, Clay Hicks and Noah Hosley both went 2 for 4 at the plate and drove in an RBI. In total, the SC Bomb Squad scored five runs on eight hits and took advantage of seven errors committed by the Lyons team.

SC took an early 1-0 lead in the bottom of the first inning when Hosley drove in David Guest on an RBI single. Neither team could get anything going offensively over the next four innings, but the boys from Lyons were able to strike for three runs in the top of the sixth to take a 3-1 lead.

However, SC responded in its half of the sixth. With one out, both Mason Dowdey and Clay Hicks each reached on errors and Hosley was able to single to load the bases for Blanchard. Blanchard then came through with a game-tying two-run single to center field, which would be a preview of what would come two innings later. 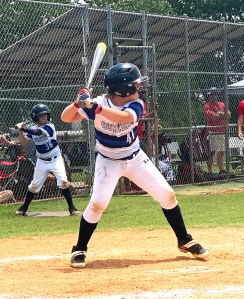 Mason Dowdey went 3 for 3 at the plate with a double, two singles and a run scored to help lead the Sumter County 10U All-Stars to a 6-2 victory over Swainsboro.
Photo by Ken Gustafson

Neither team could score in the seventh and the game would have to be decided in extra innings. Lyons jumped out to a 4-3 lead in the top of the eighth, but the SC Bomb Squad would have the final say on the outcome of the contest.

In order to speed the game up, SC was granted a runner at second base in the form of David Guest to begin the bottom of the eighth. Lyons subsequently decided to intentionally walk Dowdey to force a double play or even a triple play possibility. However, Clay Hicks had other ideas. The SC third baseman promptly delivered a game-tying RBI single, setting the stage for Blanchard’s game-winning heroics. Hosley reached on a fielder’s choice for the first out of the inning, but Blanchard was able to drive in Dowdey from third for the winning run on his walk-off single. 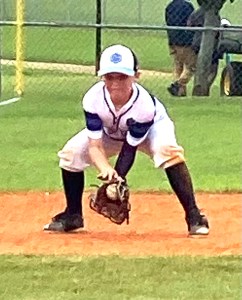 Being that the SC All-Stars sustained a loss at the hands of Wayne County the day before, they would not have even faced Lyons without first taking care of their first opponent on Thursday; the 10U Swainsboro All-Stars (SWNS). In that game, SC got a three-hit game from Dowdey and a two-hit game from Hicks that led to a 6-2 victory for the SC Bomb Squad over SWNS.

Sumter County jumped out to a 3-0 lead in the bottom of the first on the strength three hits and two SWNS errors. With two outs, Dowdey singled to right field and Hicks followed that up with a double to left field. Hosley was able to drive in Dowdey for the first run of the game by reaching on a fielder’s choice. Then Blanchard drove in Hicks on an RBI single to give SC a 2-0 lead. 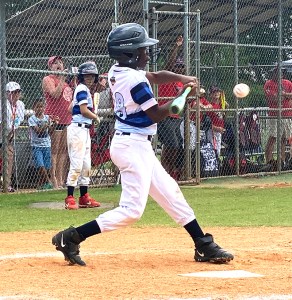 Sumter County’s Noah Hosley went 2 for 4 with two singles and an RBI in the Bomb Squad’s 5-4 come-from-behind victory over the Lyons All-Stars.
Photo by Ken Gustafson

Vincent Kearse would later reach on an error and Gage Norman also reached on an error that allowed Kearse to score. For the game, Sumter County took advantage of four errors committed by SWNS.

SWNS responded with two runs in the top of the second inning, but SC responded with three more runs in the bottom of the fourth. Asher Bishop led off the frame with a double and Drew Reeves singled, putting runners at first and third for SC with nobody out. This set the stage for Luke Lamberth, who promptly belted a two-run triple to give SC a 5-2 lead. However, the Bomb Squad was still not done. Matthew Owens drove in Lamberth on a fielder’s choice to give SC its final insurance run of the game. The Bomb Squad was able to hold SWNS the rest of the way and secure a 6-2 victory. 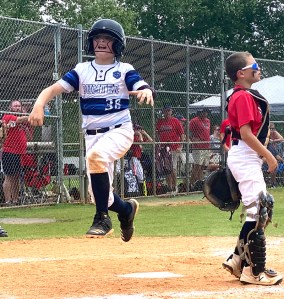 Clay Hicks scores the tying run on Christian Blanchard’s two-run single in the bottom of the sixth inning against the Lyons All-Stars.
Photo by Ken Gustafson

The SC All-Stars will now focus on their next opponent; the St. Simons Island 10U All-Stars. SC will take on the boys from the coast on Friday morning, June 25 at 10 a.m. Should they win that game, the SC All-Stars will face an undefeated Wayne County team in a rematch at 11:15 a.m. on Friday. In the first game between the two teams on Wednesday, Wayne County came out on top 8-3. Should Sumter County win that contest, the Bomb Squad will play Wayne County for the third time and this time, it will be for the GRPA State Championship. That game would begin at 12:30 p.m. on Friday, June 25.