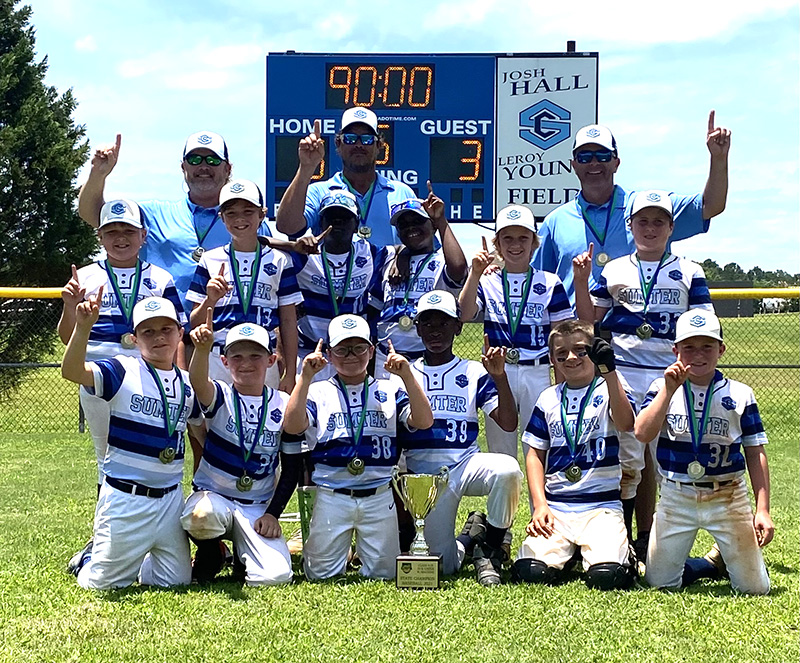 AMERICUS – It took having to win three straight games in the hot summer sun, but in the end, the 10U Sumter County All-Star Baseball Team (SC) had what it took.  The SC Bomb Squad, as the team is know affectionately, defeated the St. Simons Island All-Stars 13-1 and then won back-to-back games over the Wayne County All-Stars (WC) by scores of 13-4 and 6-3 on Friday, June 25 at Sumter Regional Park to claim Sumter County’s first Georgia Recreation and Parks Association (GRPA) State Championship in baseball since 1990.

“It’s hard to explain the emotions,” SC Head Coach Mike Reeves said. “Like I’ve said every time, these kids just don’t quit. They came in today facing that brick wall of three games and won all three. They played the best baseball they’ve played all season today and beat a good Wayne County team. I can’t say enough about the way these kids never give up. They play as a team and they never quit.”

Having suffered an 8-3 loss to Wayne County on Wednesday, June 23, the SC All-Stars were forced to fight their way out of the losers bracket to reach their ultimate goal. They kept hope alive on Wednesday by shutting out the Moultrie All-Stars 11-0, then defeated the Swainsboro and Lyons All-Star teams by scores of 6-2 and 5-4 on Thursday. Having run that gauntlet, the SC Bomb Squad still faced the prospect of having to win three straight games on Friday to claim the state title. 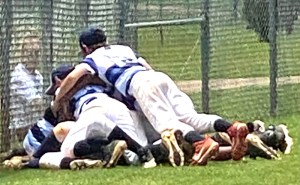 The Sumter County 10U All-Stars have an dog pile celebration after beatng Wayne County 6-3 to capture the 2021 GRPA State Championship.
Photo by Ken Gustafson

In SC’s first Friday game against the St. Simons Island All-Stars (SSI), the Bomb Squad fell behind 1-0 in the bottom of the first inning. However, SC responded with five runs on six hits to take a 5-1 lead. Christian Blanchard, who was the hero in SC’s 5-4 victory over Lyons the day before, drove in the squad’s first run of the game on a double to center field. Vincent Kearse then reached on a fielder’s choice and the SC All-Stars had runners at first and second with nobody out. Gage Norman then drove in another run on an RBI single and was able to advance to second on an error. With runners at second and third with nobody out, Asher Bishop drove in the squad’s third run of the game on an RBI single, making it 3-1 in favor of SC. That was followed by an RBI single from Drew Reeves and then another RBI single from Luke Lamberth to give the boys from Sumter County a 5-1 lead.

However, the SC Bomb Squad was still not done. In the top of the third, SC added two more runs on two hits. Clay Hicks led the inning off with a single and Noah Hosley hit a fly ball to center field that was misplayed by the SSI center fielder. That error allowed Hicks to score and gave Sumter County a 6-1 lead. Later on in the inning, Gage Norman drove in the squad’s seventh run of the game on an RBI single. 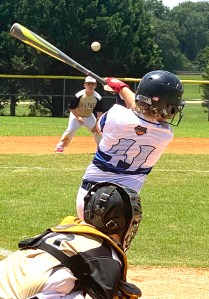 Sumter County left fielder Mason Dowdey went 1 for 3 at the plate with a single and an RBI to help lead the SC Bomb Squad to a 6-3 victory over Wayne County and a GRPA State Championship.
Photo by Ken Gustafson

However, the SC Bomb Squad still had more offense to dispense from its arsenal; much more! In the top of the fourth inning, SC exploded for another five runs on three hits and took advantage of three errors committed by SSI. David Guest drove in a run on an RBI single and Mason Dowdey belted a two-run double to center field to give SC a 10-1 lead. Hosley would later reach on an error that allowed Dowdey to score and Blanchard drove in the squad’s 12th run of the game when he reached on a fielder’s choice. In the top of the fifth, Sumter County added one more insurance run on an RBI single by Luke Lamberth and would go on to secure the 13-1 victory. 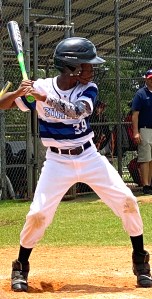 Sumter County’s Noah Hosley went 1 for 2 with an RBI and a run scored to help lead the 10U Sumter County All-Stars to a 6-3 win over Wayne County two in the GRPA State Championship.
Photo by Ken Gustafson

SC’s win over SSI set the stage for the final two teams left standing; the SC Bomb Squad and Wayne County. WC only had to win one more game to claim the state title, but on this day, Sumter County, the host team, would not be denied.

In the top of the second inning, the SC Bomb Squad jumped out to a 5-0 lead. With two outs and runners at second and third, Norman drove in Hicks and Blanchard on an RBI single to give SC a 2-0 lead. Asher Bishop and Drew Reeves both followed with singles to put runners in scoring position, and Luke Lambert performed the cleanup duties by belting a three-run triple to give SC a 5-0 advantage. 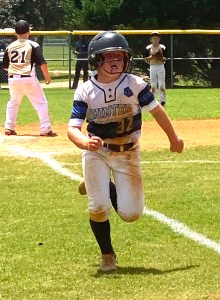 Neither team could score a run over the next two innings, but the SC All-Stars were called the Bomb Squad for a reason. In the top of the fifth, the SC All-Stars exploded for eight runs on 11 hits to put the game out of reach. WC tried to respond in the bottom of the fifth by scoring four runs on five hits, but it would not be enough as Sumter County would go on to defeat WC 13-4.

Everyone in the Sumter County lineup had at least one hit in the ball game and nine players had two hits in the contest. Malik Paul, who is also a member of the team, would have been in the lineup, but sustained a broken ankle. In total, SC scored 13 runs on 20 hits and committed three errors, while WC scored four runs on 10 hits and committed three errors. Luke Lamberth led the SC attack by going 2 for 3 at the plate with a triple, a single and three RBIs.

Having handed the boys from Southeast Georgia their first loss of the tournament, the SC All-Stars found themselves one win away from earning the county’s first GRPA baseball state championship since 1990. To earn that state title, they would have to topple WC once again, but as the decisive championship game began, it was apparent that the momentum had clearly swung firmly in SC’s direction. 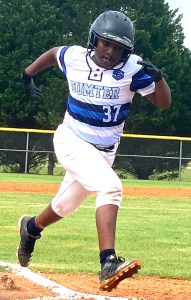 Sumter County right fielder Vincent Kearse went 1 for 2 with a double and two RBIs in SC’s 6-3 win over Wayne County to win the GRPA State Championship.
Photo by Ken Gustafson

In the bottom of the first inning, the SC All-Stars jumped out to a 4-0 lead. Matthew Owens and David Guest led off the inning with back-to-back singles and Clay Hicks would later single to load the bases for Noah Hosley. Hosley then drove in Owens on an RBI single to give SC a 1-0 lead. Blanchard then drove in another run on a fielder’s choice and Vincent Kearse followed that up with a two-run double to give SC a 4-0 lead.

However, WC responded with three runs in the top of the third. With runners at first and second with one out, David Porfilio reached on an error and Sammy Pye would later drive home WC’s first run of the game when he grounded into a fielder’s choice. After Asher Edenfield lined out to David Guest at shortstop for the second out, Zaiden Curry drove in two more runs by grounding into a fielder’s choice. Pye was thrown out trying to advance to third, but WC was back in the game, trailing 4-3.

Neither team could score a run in the fourth, but SC was able to get two insurance runs in the bottom of the fifth. With runners at second and third and two outs, Mason Dowdey singled to left field, allowing Lamberth to score. However, Guest was able to score on an error by the WC left fielder and SC had a 6-3 lead. 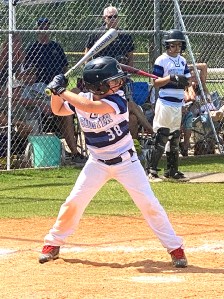 Sumter County second baseman Gage Norman went 2 for 3 at the plate with two RBIs and scored a run to help the Bomb Squad defeat Wayne County 13-4 in the first of the club’s two-game sweep of WC to win the GRPA State Championship.
Photo by Ken Gustafson

WC had one last chance to mount a come-from-behind victory, but Edenfield, Curry and Bryson Blocker all grounded out to end the game. After the final out, the SC All-Stars had a dog pile celebration behind the third base line as they had realized their dream of a state championship.

Matthew Owens led the Bomb Squad’s attack by going 3 for 3 at the plate with a run scored and both Hicks and Reeves had two hits in the contest. Vincent Kearse went 1 for 2 with two RBIs and Mason Dowdey went 1 for 3 with a single and an RBI to help lead SC to the state title.