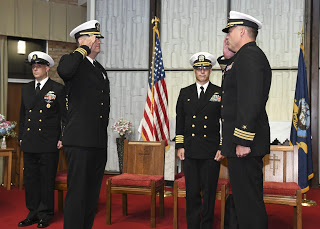 By:  Stephanie Fox, Navy Office of Community Outreach
MILLINGTON, Tenn. – An Americus, Georgia, native successfully completed his Navy tour at Naval Information Warfare Training Group (NIWTG) Norfolk, June 11, 2021.
Cmdr. Chad Layfield joined the Navy through the Baccalaureate Degree Completion Program in 2000. In 2003, Layfield was commissioned through Officer’s Candidate School, Pensacola, Florida.
“While serving in the United States Marines Corps. Reserves and going to college, I was afforded the opportunity to become a Naval Officer through the Baccalaureate Degree Completion Program,” said Layfield. “I wanted to ensure I did my part to help preserve our wonderful freedoms for generations to come.”
Layfield, who is a 1996 Americus High School graduate and a 2000 Southern Polytechnic State University graduate, believes the values required to succeed in the Navy are similar to those found in Americus.
“Service before self is a value I’ve carried with me during my service,” said Layfield. “You must also have discipline and dedication to the mission.”
Layfield assumed command of NIWTG Norfolk in December of 2019. Previously, Layfield served as the direct support cryptologic officer aboard USS Barry, the signals warfare officer aboard USS Mustin, the cryptologic resource coordinator and the deputy information warfare commander at Commander Amphibious Squadron Eleven embarked aboard USS Essex and USS Bonhomme Richard, and as the fires director for Commander, United States Navy, Central Command/Commander, Fifth Fleet. Ashore, Layfield served as the senior operations watch officer at Naval Security Group Activity, Pensacola, Florida; the subsurface cryptologic carry-on program contracting officer representative at Navy Information Operations Command, Suitland, Maryland; the N71 and lead cryptologic resource coordinator course instructor at Information Warfare Training Command, Florida; the executive officer at Information Warfare Training Command Pensacola, Florida; and as an engineering program manager in wireless design on the Secretary of the Navy Tours with Industry at Apple Inc.
Though there are many opportunities for sailors to earn recognition in their command, community and careers, Layfield is most proud of his service at NIWTG Norfolk.
“The Navy entrusting me enough to lead the world’s finest sailors, Marines and civilians as commanding officer,” said Layfield. “That is my greatest accomplishment.”
Cmdr. David Clark, a native of Indianapolis, Indiana, assumed command of NIWTG Norfolk from Layfield.
“I am honored and humbled to have been chosen to lead in this capacity, and I will strive to follow in the footsteps of other great servant leaders,” Clark said.
During his time as commanding officer, Layfield upheld the mission of NIWTG Norfolk: to advance the Fleet’s information warfare (IW) warfighting readiness through operational based training, highly experienced IW deployers and IW mission data management in support of afloat and ashore commands delivering decisive advantages in the maritime domain.
As Clark assumes command, he too will undoubtably lead with those values in mind, while following in the footsteps of not only Layfield, but all who have served as commanding officer of NIWTG Norfolk before him.