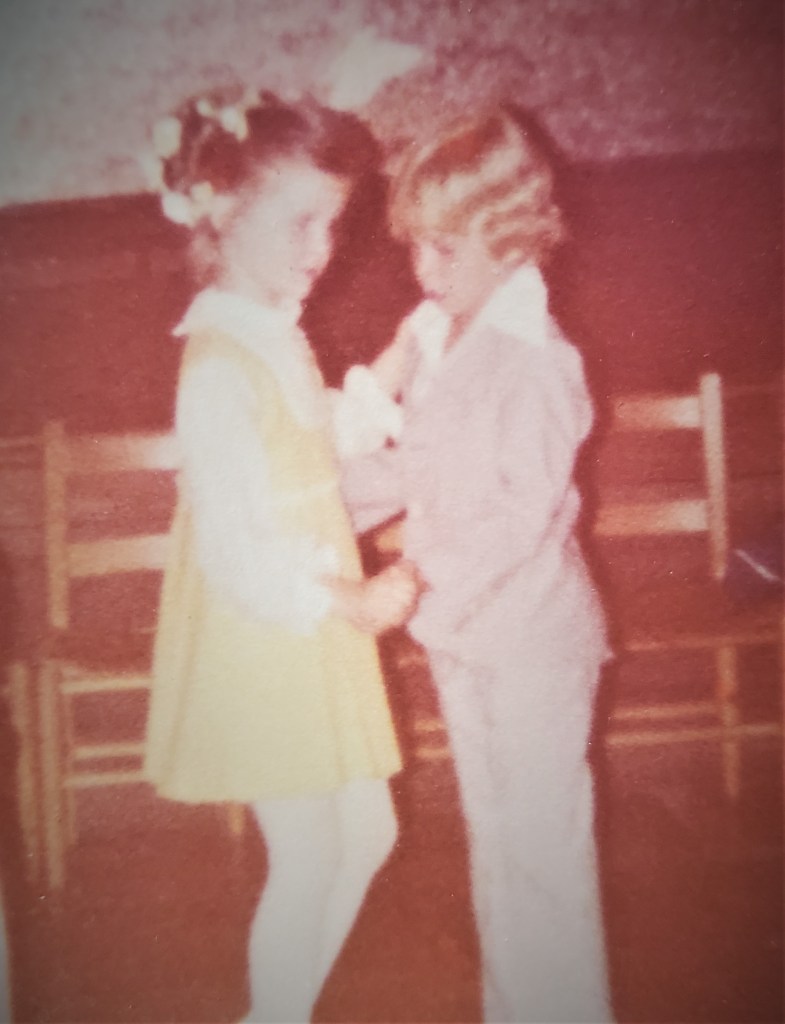 My mama was obsessed. Every little perfect ruffle, every little dainty element, every little button fastened just so. Perfect, all of it was perfect. I am five years old, in a dress meticulously put together. The hair. The hair was washed, rolled, and pulled up. At just the perfect spots were silk flowers infinitely bobby pinned. Perfect. It was all perfect. And so, we all loaded up in what was probably a used lime green Mercury and headed to Calvary Episcopal Church to see a young Tracy Hall do whatever five-year-old kindergartners do to take the next step to real kindergarten. There would be punch and cookies I could poke my finger through to eat, no doubt there was a spray-painted gold imprint of my hands which obviously came out of a pie plate. At least one piece of art complete with cotton balls was present and intended to go home for hanging on the fridge. Oh yes, I am most certain this night had been planned with nothing less than exhausting perfection. The kind of perfection which expectations take root in and if not honored in just the right manner, life would crush down around us. No pressure here. Go forth.

There was dancing. There were boys. And none of this was going to go as planned. Expectations were breeding grounds for overwhelming heartbreak and the ground was ripe. It came time to show off whatever prescribed dance my teacher had taught us. As it should be, it was the boys’ responsibility to go ask for the dance, take their girl’s hand and go stand in the place predetermined so all could get a glimpse of the cute five-year-old couples. The music started, I sat, the expectation Donnie was coming to ask for the dance. Donnie was not going to be persuaded to dance with the girl who had flowers in her hair. Not on his own accord anyway. So, after many an anxious moment, and knowing he was not coming for me, I got up, walked my way through the “moosh pot” of boys, extended my hand and then asked Donnie to please dance with me. He agreed and we took our predetermined place in the circle to do some blasted version of a box step. I was devastated. So much so I can still feel the emotions over that night some 45 years later. There was no yellow dress pretty enough, there were not enough silk flowers in the world to make that not hurt. I’ve yet to sit down with a therapist who can make it stop hurting. Perhaps not being chosen is the thing from which we don’t recover. Perhaps all we can choose is to go forth anyway.

I spent a time teaching fifth graders how to do a box step together. Although I never admitted this to them, you better bet I would make sure every girl in that room was chosen. The boys, I could teach them how to cut in, but the girls, no. There was not going to be, even for seconds, a girl having to breathe through one of my classes thinking she wasn’t chosen. Except things don’t always go to plan. There were days when my girls outnumbered my boys and when I was at my best, I would know this and have a plan. But again, some things just don’t go to plan. Eventually I would come up with something quick, but I always wondered if she felt unchosen for even a second. Because a second is too much. I know, I know, she will go forth.

To not be chosen. Perhaps the most painful of all the pains. And we hate it. It is the reason those humane society commercials get to us, it is the reason we always feel a little ache for the candidate who loses, it is the reason “always the bridesmaid never the bride” is said under your breath, with a “bless her heart” to follow.  It is why we can’t watch the boy whose name didn’t make the team’s list walk away. It is the reason I would go through no less than 2 bottles of Pepto-Bismol on the last night of sorority rush, because I refused not to choose all the girls. Some of the greatest heartbreak I’ve known is seeing an adoptive family not being chosen. Crushing. And we treat being chosen as if it is a small thing. It is never a small thing. Notice it the next time a new line opens and the attendant points at you and says, “I can take you over here.” That is huge. My friend Fred has her entire day made if the cat chooses to sit next to her. It matters. Ask someone, ask anyone, “tell me a time you were chosen.” Then ask for a tale of when he wasn’t chosen. You will see a vast range of the emotional catalogue. Many a person fights spiritual wars over being chosen. It has a way of settling in your bones and either bringing out your best or your worst. Either way, you have no choice but to go forth.

And then there are the times you think you aren’t chosen but, you ended up being the ripest of choices. June 30, a rainy Wednesday night up at the public safety building. There was a crowd who had chosen our city. They were there to say “amen” to 30 days of praying for our home. There were precious faces. I focused on the men because I had been praying for men in particular to rise and fight for our city, to choose our village. There was Stephen Woodson who daily gets up to fight for our youth in the toughest of circumstances in the most firm and dedicated way imaginable. There was Charles Christmas who chooses to see life through others’ eyes, so they know they are seen. There was Bud Womack who chooses to put law enforcement’s armor on them every day. There was Mark Scott, who although I have never asked him, I am more than certain he chooses to put our home in his thoughts right up there with his God and his family. Four men, among many others, who put a face on choosing our home, on choosing us, on choosing you, on choosing me. The prayer began and I needed to take pictures. But no one had left me a space to stand to get them. No one had chosen to save me a place. And again, it crept in, this idea of not being chosen. So, to get my photographs, to not block anyone’s view, I got up front and I took a knee in the rain. The prayers began. And my knee, bearing down in the cement, was holding more than it was designed, so I dropped my other knee as well. And I was listening to the prayers of these men who chose my city, my neighbors, my home. As they prayed more, and the more rain I let fall on me, I realized I had been chosen. Of all the places I wanted and needed to be, my God had chosen me to be right there, the only one on my knees, in a place reserved especially for me at his feet.  I had been chosen. As the prayers came down, so did my tears. On some days, you realize an incredible place has been reserved just for you. Chosen and designed only for you to do what you alone can do. Look around, for a time such as this, you were chosen. Go forth.