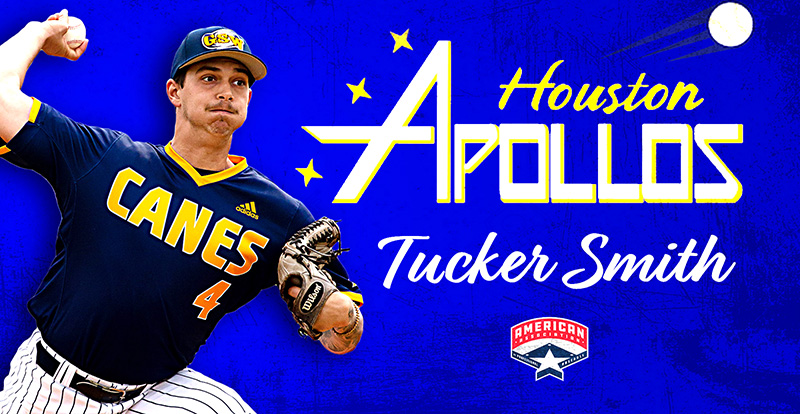 AMERICUS – Former Georgia Southwestern State University (GSW) starting pitcher Tucker Smith has been honing his craft at the professional level with Houston Apollos of the American Association of Professional Baseball (AAPB). Smith signed with the Apollos back in late May of this year.

The American Association is one of the great names in the history of professional baseball leagues in the United States. The first American Association was formed in 1902 as an independent minor league for the larger cities in the midwestern area of the country. Today, the AAPB footprint extends from Winnipeg, Canada, down to Cleburne, Texas, with franchises in the following states: North Dakota, South Dakota, Nebraska, Iowa, Wisconsin, Illinois, Indiana, Missouri and Texas.

According to the club’s website, www.houstonapollos.com, so far this season, Smith has started nine games for the Apollos and has a record of 1-2 with an ERA of 5.17 and has a strikeout to walk ratio of 37/13 in 48.2 innings pitched.

Back in May of this year, Smith completed his collegiate career at GSW and was named the Peach Belt Conference Co-Pitcher of the Year. He is the third pitcher in PBC history to repeat as Pitcher of the Year. Smith, a native of Fort Walton Beach, FL, had the lowest opponents batting average (.184) in the league and led with 87 1/3 innings pitched. He also was ranked second in the conference in strikeouts (90).

Smith earned NCAA Division II National Pitcher of the Week honors for the week ending March 14, 2021 from the National Collegiate Baseball Writers Association (NCBWA) after throwing a no-hitter at Claflin University on March 12.