Sumter County raises a glass to President and Mrs. Carter for their 75th Anniversary 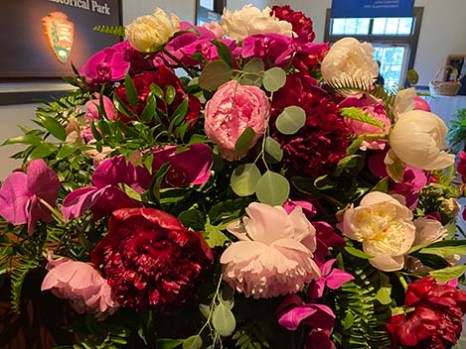 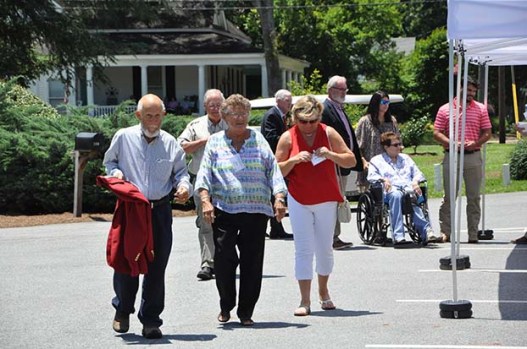 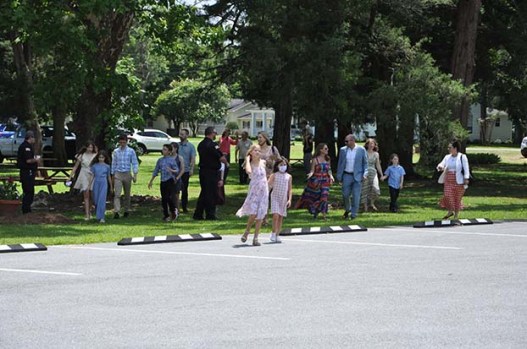 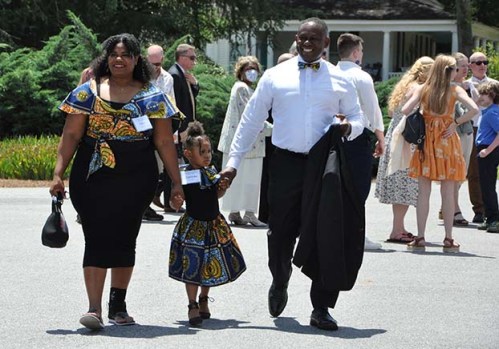 Pilar and Tony Lowden and their daughter Tabitha 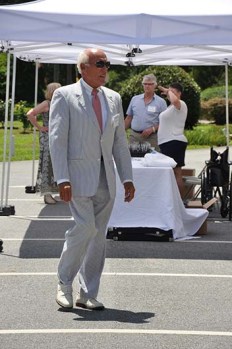 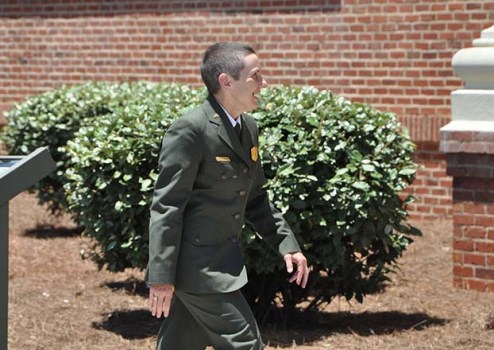 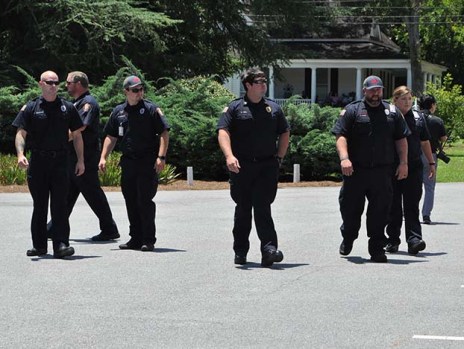 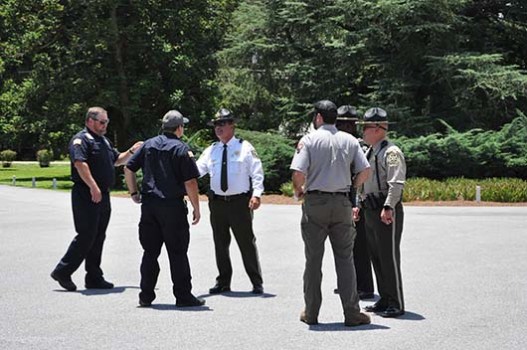 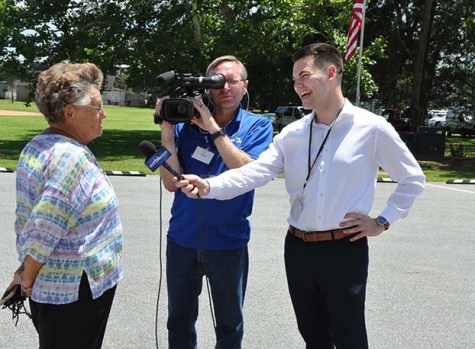 Jan Williams being interviewed by WRBL 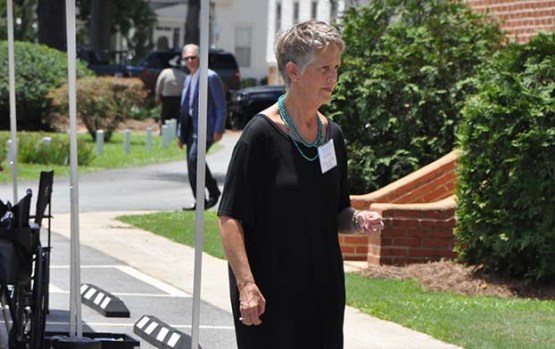 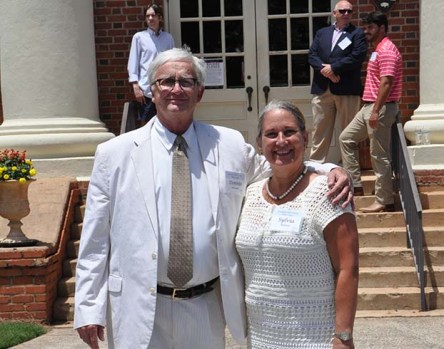 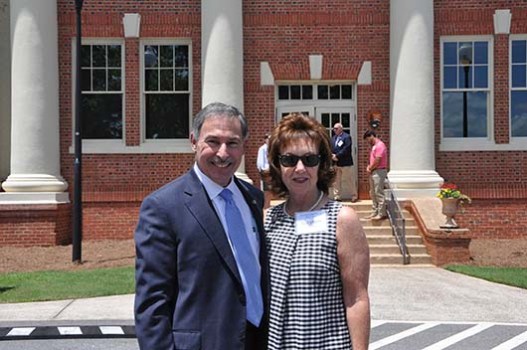 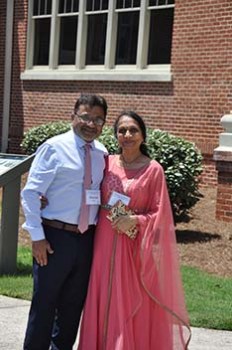 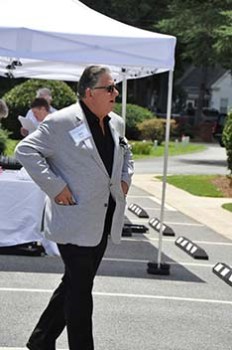 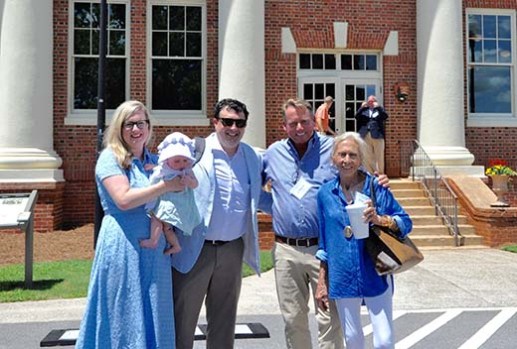 Katie and Edgar Smith and their daughter Margaret, Chuck Smith and Frances Irlbeck 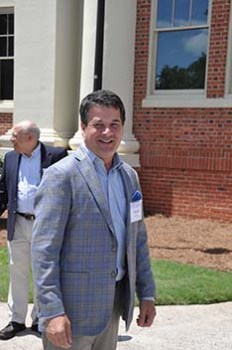 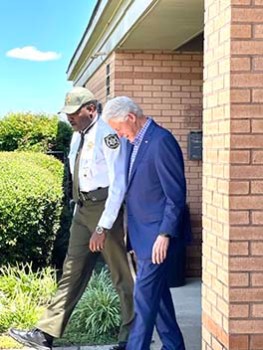 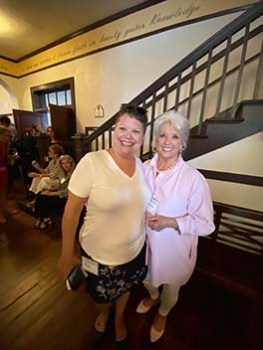 This event was one for the books. It ran like clockwork, which seems like a small miracle considering all the work that goes into an event like this, not to mention the Secret Service involvement and notable attendees with their own staff to accommodate. This is one of many times Sumter County was well represented by the people who helped make this event special.  Americus Times-Recorder spoke with a few of the local services and businesses involved in this celebration to find out what goes into an event like this.

Vic Patel of The Windsor Hotel told the ATR the hotel was completely booked with reporters and guests attending the ceremony. He had approximately 20 staff people at the Windsor’s restaurant, Rosemary and Thyme, on Saturday night to make sure everyone was well taken care of.  Patel said that much of his staff is new, but they all did a wonderful job. “All of my staff at the hotel; reception, housekeeping, bartenders, kitchen staff, and servers were at the top of their game. They understood their part in making this event a success for everyone who came to Sumter County. I could not be more proud of the impression they made on our visitors.”

The Canterbury Kitchen, owned by Louis and Sumner Resnick, provided the catering for the affair. They set up café tables and chairs for guests to use in each of the 10 rooms with a delightful fruit tray with French cream, Plains Peanuts, and cheese straws made by Frances Irlbeck and Lillian Allethea Smith Wall, Rosalynn Carter’s sister. The ATR was told they made 800 cheese straws and not one was left after the event ended. Canterbury Kitchen said that President Carter wanted the food to be some of his favorite staples of southern hospitality.  Canterbury staff carried silver trays with tomato and pimento cheese sandwiches, ham salad sandwiches, and chicken salad sandwiches for the guests. When asked how they managed to serve 300 guests champagne at the same time for a toast, Resnick said, “We had one staff member for every 10 guests.”  She went on to say, “It was truly an honor to be involved in such a special event. We are thankful for the Parks Department, Sheriff’s Department, Leon Holloway, and our 30 staff members who worked so hard the day of the event.”  The Resnicks also wanted to send a special thank you to their “right-hand man”, Donnie Price, who was instrumental in the success of the catering.

Forty-seven floral arrangements were created by Gatewood’s Flower Shop to adorn each table top, as well as the top of the cake and the entry to the Plains High School. The aroma of the stunning arrangements was evident before the visitors even saw them. The flowers were donated by Leon Holloway and Blake and Isabelle Sullivan. Holloway stated he was grateful for Karen Austin and Michael Jarvis for their dedication and hours spent putting it all together.

The story behind the flowers Holloway chose is as interesting as the arrangements themselves. “Mrs. Carter loves peonies and purple orchids.” he said. When the event came up, Holloway stated that he had recently watched Discovery Channel’s, Alaska: The Last Frontier, in which Charlotte Kilcher released her peonies into Kachemak Bay in honor of those who lost their lives to COVID-19 and their families. “It was such a beautiful tribute and their flowers were so amazing” Holloway said, “I had to reach out to the Kilcher Canyon Peonies owners, Charlotte and Otto to include their blooms in the arrangements.”.  Since 440 peonies are not a small order, the Kilcher’s enlisted the help of Chris Beks, of Arctic Alaska Peonies to fill the order.

The Purple Phalaenopsis Orchids in each arrangement came from Jaxma Orchid Greenhouses in Green Cove Springs, Fl. Holloway was honored to have had “flowers from sea to shining sea” he said. A perfect tribute to the couple and their service to our country.

Sheriff Eric D. Bryant told the ATR that “Anytime the secret service has a protectee that comes into the jurisdiction, they always reach out to local law enforcement a couple weeks in advance.” Bryant said, “Our job was not only traffic and crowd control, we are also responsible for making sure that public safety, ambulance services, and fire services are always able to access these individuals.”. Local law enforcement officials coordinate with the GA state patrol to assist with moving the protectees from point “a” to point “b”, which in turn relieved some of their man power and allowed them the time to ensure that traffic flowed smoothly at the airport and the Plains High School. “I was in the motorcade to serve as the communication liaison between local public safety including the Plains Police Department, Sumter County Fire, and EMS and the motorcade. Should a problem arise, I am able to communicate to all local public safety entities quickly.” Sheriff Bryant said.

The Sumter County sheriff’s office was staffed with approximately 12 people for this event.  “We minimize the expense to tax payers by utilizing a lot of senior staff members to participate, being that they are salaried. We also reach out to younger officers as well for the experience they get working an event like this.” Said Bryant. The day before, his staff was briefed to ensure they had the proper uniforms, their cars were clean, and they were at the proper location at the appropriate time. “The most challenging thing for our staff is the hurry up and wait,” Bryant said. “When you’re waiting for people traveling from so many different places, we can say that they will arrive at 10 but that can very well turn into 11:45. That happened with the Clintons, they were supposed to depart New York at 12:30 however they were home leaving for the airport at 12:30 which pushed their arrival back probably an hour.” Bryant went on to say, “It’s understandable, things happen, and because of that, we are staffed well enough to provide relief for deputies who needed breaks or whatever the case may be during these long wait times.”  When asked if there was anyone he would like to thank for their help at this event, Sheriff Bryant said, “I would like to say that I would not want to work any of these details without the support of the men and women at the Sumter County Sheriff’s Office. They regularly step up to the plate to do an awesome job every time. I couldn’t do the things I do without their support of these dedicated men and women.”

Jill Stuckey, Superintendent of the Jimmy Carter National Historical Park, had several meetings over the last few months with law enforcement, the caterer, her staff, and her regional office preparing for the occasion. There were 20 of their permanent staff, five people from their regional office, and six or eight of their “wonderful” volunteers identified by a special green volunteer shirt worn the day of the event. Stucky stated “I am so fortunate because my entire staff pulled together, they gave it their all, they worked overtime to make this event happen.  Randy Dillard of Plains was instrumental and does a stellar job. He knows everything about the high school, he’s from here and knows everyone. If we needed an electrician, anything, Randy knows that person. Even at the very last minute he and his staff moved the bust of President and Mrs. Carter in the proper place for the celebration. We (the Jimmy Carter National Historical Park) have been under construction for a year and a half at the High School, so just two weeks ago there was saw dust everywhere and everything was out of place, Karen Barry, Administrative Officer, was out with the pledge dusting off everything, Beth Wright, Chief of Interpretation, was day and night working on scheduling, putting room numbers on the doors.” Stuckey’s final remark was, “All of our staff love Jimmy and Rosalynn, that’s why we all pull together. We were all wanting and hoping it would be perfect for them. It wasn’t about looking good, it was about our love and devotion for the two people we fortunately get to honor and be with every day.”

Stuckey also gave the ATR the scoop on Paula Deen’s relationship with the Carters. Years ago, before Deen became a household name, she was a huge fan of Jimmy and Rosalynn and she wanted them on her show. After being turned down, she coincidentally ended up in a few of the same places Stuckey was. A mutual friend took Stuckey to Deen’s restaurant, where she convinced Paula to do a commercial in Plains. Deen came to Plains and filmed a commercial, which happened to be completed the year her show took off. The show she did in Plains created so much tourism for Plains that a couple of years later, President Carter decided he needed to do the show again in order to draw more tourism to Plains. Deen has been a good friend of the Carters ever since.

Kim Fuller, Executive Director/ CEO at Friends of the Jimmy Carter National Historic Site, said meetings between Ruth Sanders, Polly Martin, Betty Godwin, Jill Stuckey, Andy Walker, Leann Smith and the Carters began in the spring.  Fuller said she is very thankful for all the people who took the time to help “Leon Holloway, Canterbury Kitchen’s food was phenomenal,” Fuller said. “Ruth Sanders and Polly just went over and beyond to me. It was a phenomenal job by everyone and I am blessed to have been part of it.”

Fuller’s family and Mrs. Carter’s family all ended up being hosts and hostesses for the event. They were assigned different rooms and their job was to take care of the people in that room.  Fuller was in the room with David Osborne (the pianist) who she has known for a long time to help make him comfortable. Her son, Bubba, was on the entrance to the High School, making this a real family affair. Fuller’s nephew, Luke, became one of the photographers for the event.  Fuller told the ATR, “Aunt Rosalynn wanted him to do the pictures to begin with and the Carter Center ended up hiring him to do the photos for the day.” She said that the all of “Uncle Jimmy’s” children filled the Plains Inn. The all gathered the day of the event and walked together from the Inn to the High School.

Kim told a funny story about Bubba, who literally ran into former President Bill Clinton. She said, “My son, my son, goes Mamma, I ran into Bill Clinton with two glasses of wine!” Bubba continued, “I was getting wine for someone and I turned around and I was like nose to nose with him and all I could think about was, I’m supposed to know who this man is.” Fuller continued, saying that all her son could say was, “I’m so sorry!” once he realized who it was. Fuller said Bubba was just “mortified”!

“It made me so happy to watch them enjoying themselves at this event” Fuller concluded as we wrapped up the interview. When asked by the ATR why she thought the Clintons would want to be there, Fuller replied, “To me it’s just amazing that these people respect and love them (The Carters) so much that they would take time out of their busy schedules to come and pay their respects.”.

This is just a small sample of the people who represented Sumter County in this celebration of the Carters’ 75 years together. Local residents should all be proud to know that we are represented so well by people who seem to all share a love and admiration for Sumter County’s favorite couple.