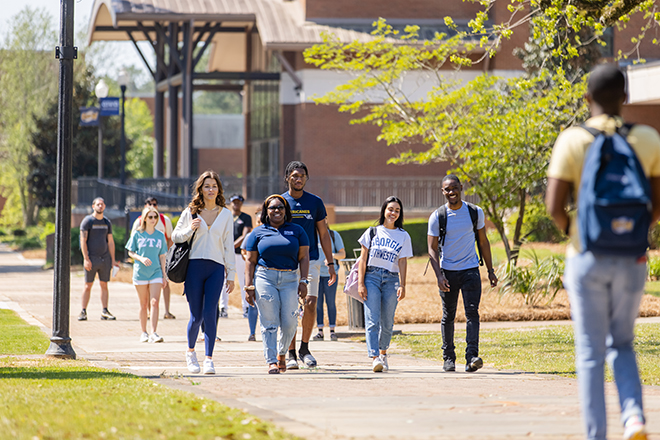 The University System of Georgia (USG) and its 26 institutions served as a significant source of stability and played a critical role in the state’s recovery with an $18.6 billion statewide economic impact. While the USG’s economic impact was up 0.6 percent from fiscal year 2019, Georgia Southwestern’s was down slightly at 1.2 percent from last year’s total.

“Georgia Southwestern’s economic ripple effect is significant for Southwest Georgia,” said GSW President Neal Weaver, Ph.D. “By generating jobs, boosting businesses, and graduating career-ready students, we are proud to play such an important role in the growth of our regional and state economy.”

The annual study, conducted by the Selig Center for Economic Growth in the University of Georgia’s Terry College of Business, reported most of GSW’s $89.7 million economic impact consists of personnel and operating expenses, budgeted expenditures and spending by students.

“With strong support from the state and significant planning from our campuses, USG’s economic impact on local communities across Georgia held steady despite a challenging year,” Acting USG Chancellor Teresa MacCartney said. “At the same time, a degree from a USG institution continues to add real value to the lives of our graduates and their families. We remain focused on doing everything in our power to help more Georgians complete college and ensure our state has a well-prepared, highly skilled workforce to grow Georgia’s economy.”

The economic impact study found every dollar spent directly by USG institutions and their students generated an additional 47 cents for the surrounding region’s economy. While $12.7 billion of the $18.6 billion was a result of that direct spending, the remaining $5.9 billion was additional spending within local communities sparked by the presence of a USG institution.

To calculate the impact for fiscal year 2020, the Selig Center analyzed data collected between July 1, 2020 and June 30, 2021. The annual study is conducted on behalf of the USG Board of Regents by Jeffrey M. Humphreys, Ph.D., director of the Selig Center.

The full study with data for all 26 USG institutions is available at: https://www.usg.edu/assets/usg/docs/USG_Impact_2020.pdf.