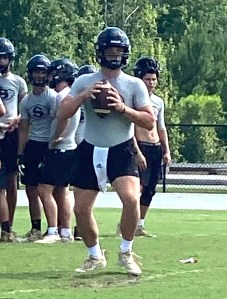 The camp started at 10 a.m. and lasted for about an hour and a half. All four squads competed against each other in controlled scrimmages. It was in this environment that the squads from Southland Academy and Sumter County competed against each other. Though it was only a scrimmage and a practice event, it is a highly rare occurrence for the two schools to compete against each other, especially in football, given the fact that the two schools only compete against one another in track and cross country due to the fact that Sumter County is a member of the Georgia High school Association (GHSA) and Southland is a member of the Georgia Independent School Association (GISA).

Nevertheless, the important thing on this day was that the teams were able to work on their conditioning, skills, technique and timing that will hopefully serve them well when their seasons start for real next month.

“It was a very quality day. I thought our kids competed. They played fast. We caught and threw some good balls and we played very well defensively,” Southland Academy Head Coach Rod Murray said. “We’re proud of their effort and this builds momentum going into camp when we start practicing Monday. It was a very good day for us.”

Coach Murray, a life-long native of Americus, was not aware of any previous football meeting between the Raiders and Panthers, but was happy to compete against them in a fun, competitive environment. “I’m glad that they were here. I’m glad that we had a great time with them and I wish them nothing but the best,” Murray said. “We’re proud of working with all these guys. Everyone was very well-behaved and played hard and we look forward to seeing them again hopefully.” 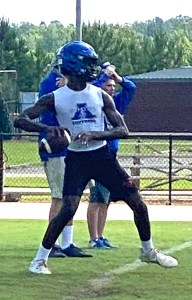 Sumter County Head Coach Ross Couch was not able to be with his team at the camp, so assistant coaches Carl Willis and Ken Eldridge were in charge of the squad on this day. Overall, Coach Willis was pleased with the Panthers’ effort at the camp.

“We had Shaw today. We had Marion County. We had Southland,” Willis said. “Sumter County High School had a good day today. They did a good job organizing. Coach E (Eldridge) did a great job over on defense keeping everybody square and I felt like the kids played well.” 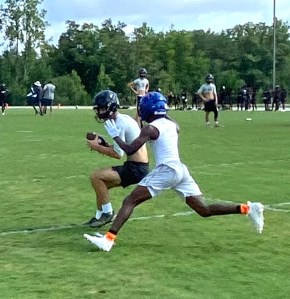 Though Willis was pleased with the overall effort of the club, Eldridge, who is the defensive coordinator for Sumter County, believes that there is still a lot of improvement that needs to be made, especially on defense, before the Panthers start their season

“We have a long way to go,” Eldridge said. “We’re way behind. We basically had three open dates during the summer and we have guys out here that weren’t out for the spring, so we just have a long ways to go. We’re nowhere near where we need to be.”