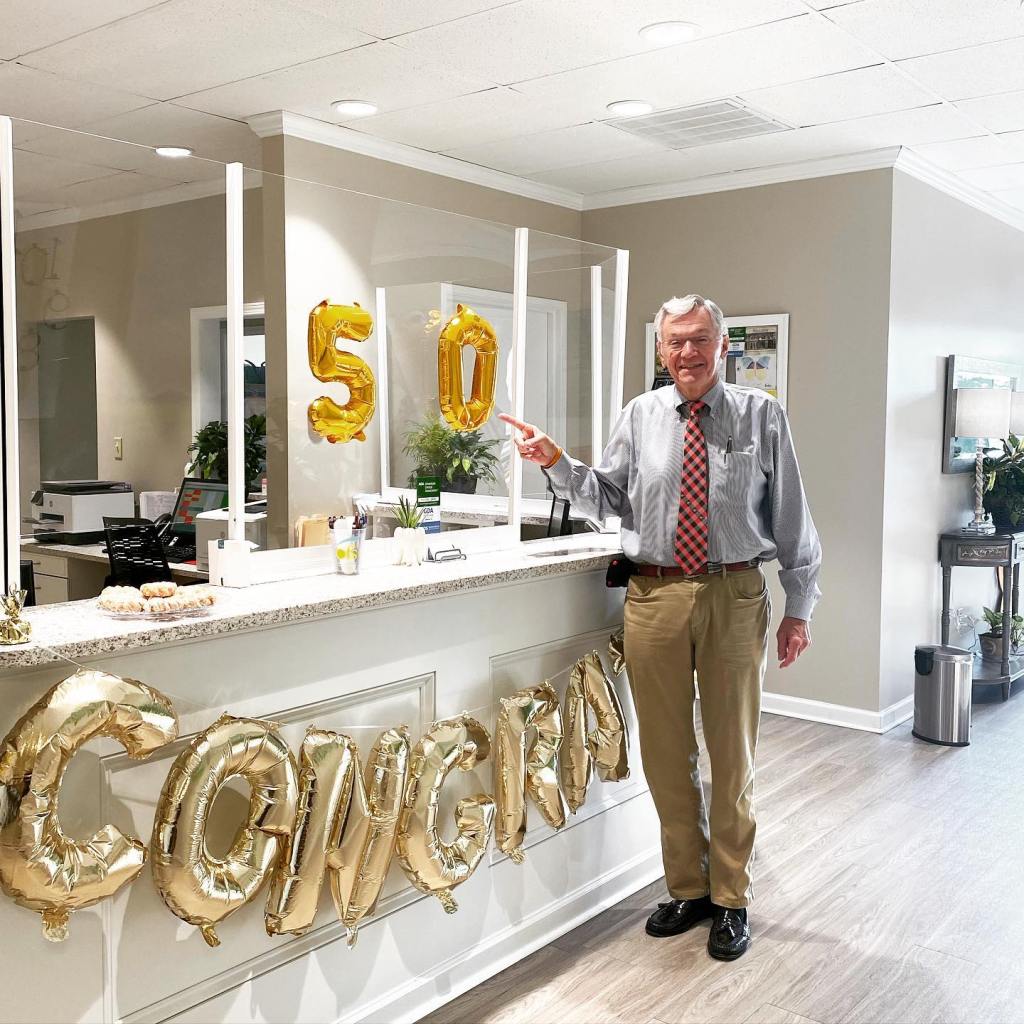 We have heard it over and again, one of Sumter County’s biggest resources are her people. For many of us, we know how very true this fact is and we can point to examples of folks to prove our case. Many of those fingers point to local dentist, Dr. Louis Riccardi. Dr. Lou, as he is affectionally known, has been serving Americus for 50 years. To be married to someone for 50 years is quite an accomplishment, to be serving a community for this length of time is phenomenal.  Although Dr. Lou would never refer to himself as a giant, many of us would, and for good reason.

Dr. Lou is an Atlanta boy. His dad was a general surgeon and encouraged a young Lou to pursue a medical career. To those who know him, it is not a surprise he graduated from the University of Georgia in 1966 with a degree in chemistry.  He then attended Emory University Dental School. Emory was considered one of the top dental schools in the nation and was the only one in Georgia, South Carolina and Florida. Upon graduating Emory in 1971, his class was the second highest scoring university on national boards with Georgetown Dental School being the first. As Emory grew its medical school, dental schools were established through the public university systems.  Partly due to the higher cost of a private education, Emory’s concentration on their medical school and the prevalence of dental schools growing, Emory’s program eventually closed. However, Dr. Riccardi was able to get the best dental education available and even pushed himself to get extensive training in root canals. Dr. Lou was also making decisions not directly effecting his education. Lou would visit Americus and get to know her residents. He was particularly impressed Sumter County housed not one but two higher institutes of learning in Georgia Southwestern and South Georgia Technical College.  It wasn’t long before neighbors such as Dr. Micky Finn, Hulme Kinnebrew, Sr., Randy Jones, Sr., Walter Rylander, Judge Marshall, and Jody Monts began enticing him to establish a dental practice in Americus. These gentlemen encouraged Lou to bring his wisdom and his practice to our neighbors. Dr. Riccardi reports they “pleaded because this town was in desperate need of a dentist.” While Americus was making a case for Dr. Riccardi to set up his shop here, he was also considering a return to Athens. His dad, ever encouraging of Lou, would also offer sweet deals for him to stay in Atlanta and serve in the Buckhead area. Dr. Riccardi, citing once again his love of the people in this town, decided upon Americus to be his home. He was sure enough in his choice and his talent he began to build his original office his junior year of dental school. He opened the office on Fetner Drive on July 15, 1971. He remained housed in the office for close to 47 years.

Dr. Riccardi is quick to add he is “very blessed to practice this long and still have ability to do what I do. God gave me the ability to use my brain and my hands. I’m very blessed.” When asked if he would do the same thing knowing what he knows now, he responds, “Absolutely I would!” Lou invested in every step of dentistry over the past 50 years, and he is amazed by how much the profession has changed. “Dentistry has come miles and miles and miles.” Technology has been a huge aid in the process but keeping up with the changes demands Lou be a perpetual student. He is dedicated to his education even now. He reports having a special affinity for the bridge and crown work he does but says filling cavities are still the most prevalent work he does. Sodas with their sugars and acidic nature make tooth enamel weak and fillings, although far more advanced than prior versions, are still the answer to the damage left behind. The way dentistry has changed in its diagnostic procedures, corrective procedures and even its cosmetic offerings are vastly different than when Lou first started his practice. Wearing gloves at one time was considered odd for a dentist. The AIDS epidemic required much education for dentists. Lou reports using gloves years before there were answers to how the virus spread because he was proactive in providing safety to his patients. Additionally, there are new regulations which protect the confidentiality and safety of patients. He is grateful for their guidance and best practice information. Although many abusers of prescription pills will claim their addiction started with pain management secondary to dental procedures, Dr. Riccardi has “always been extremely careful of that (drug use).” He feels he under uses prescription pain medications and has been cognizant of the dangers of potential abuse. He reports, “I was aware of what could happen.” Dr. Riccardi’s ability to be proactive is not limited to catching issues with the mouth alone, he has been forward thinking in the overall health of a patient. 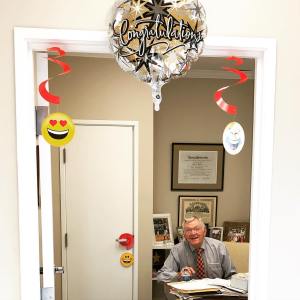 Dr. Lou has seen children as young as three to four years old. Over his 50 years of service, he has seen his patients have children and then those children bring their children in for Dr. Riccardi’s special brand of treatment. Some patients are so dedicated it is not unusual for those living out of town to get their dental needs met in his chair. He reports patients coming to see him from Atlanta, San Francisco, Dever, and even one who lives in South Korea will schedule an appointment when he is home visiting family. “It’s been great to see that happen, it’s been awesome to see families grow, some stay, some actually come back.” Family is a huge piece of what Dr. Riccardi values. Although raised in Atlanta, he calls Americus his hometown. He holds farm families especially dear and has enjoyed learning about their work over the years, he is impressed with their total dependence upon God’s grace to bring in the harvest.  As special as farm families are, Americus gets to see dental families as well. Dr. Alex Riccardi has joined the Riccardi practice and with her came more growth. The Riccardis are about twice the size they once were, and Dr. Lou indicates no signs of this slowing down. Lou reports he supported Alex in her decision to pursue dental school. Although he always felt she would pursue education after undergraduate school, he allowed her to come to her own decisions. It was in her last two years of undergraduate school she decided upon dentistry. Dr. Lou also trusted her ability to find her feet in the place a practice best suited her. With much of the adoration for this community Dr. Lou has, she also settled into Americus as being her choice. “She loves Americus and the people here and she wanted to carry on following me.” Dr. Lou says it is like fresh breath having Alex join forces with him. He has no current plans to retire, even though his office would be left in very capable and talented hands.
“I’ve been very blessed all these years to be able to do what I do, and I love it. I always told myself, if I wake up someday and said, ‘I don’t want to do this’ then that would be the day I retire. That day hasn’t happened yet.” Dr. Lou will admit he wants everything in order before he retires, and he wants the best care for his patients in place before he puts down his drill. Because their practice is so strong the Riccardis may consider an associate in the future. At that point, Dr. Lou reports he might consider “slowing down.”

Until then, we reap the rewards of two dentists named Riccardi. But that isn’t the only gifts Americus has received because of Dr. Lou Riccardi’s decision to move to Americus. We have enjoyed three other daughters, Ashley, Haley and Kara and are proud that Dr. Lou’s wife of 35 years, Candy, is also ours.  Dr. Lou reminds us good nutrition begins with the mouth. It may be something we take for granted, until the moment something in our mouth begs for our attention. Our community is charmed with a man and his daughter who never take this for granted. It is always a joy to be chosen. The Drs. Riccardi have made it a family legacy to choose us. In Dr. Lou’s words, “I love Americus and I love Sumter County. They are right next to my heart; I promise you that.” There are indeed giants among us. We have one in Lou Riccardi. And I promise you that.