14U Baylor and UCLA move on, as does 17U Gonzaga in DHBSL Playoffs 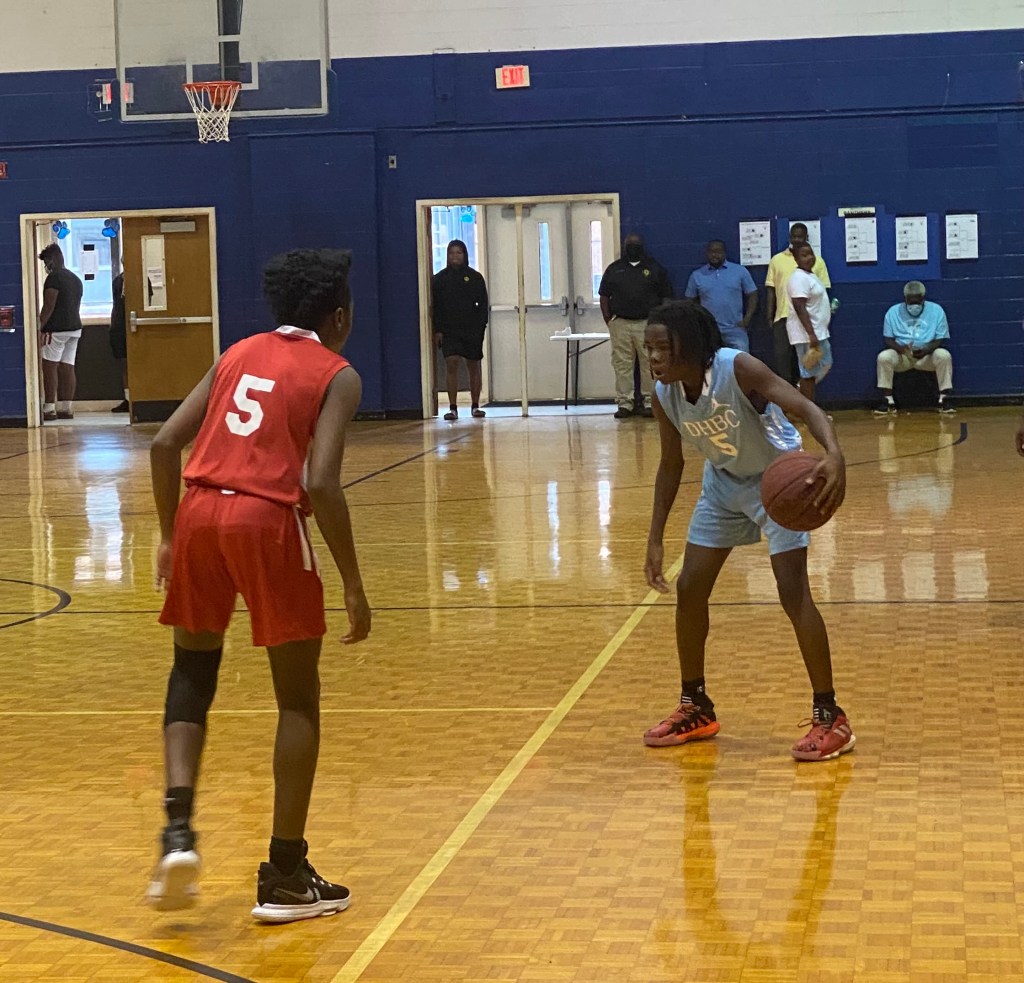 14U UCLA guard Labron Brown (#5) scored 18 points to lead the Bruins to a 37-33 win over Arkansas in the DHBSL Playoffs. Photo by Ken Gustafson

AMERICUS – For some teams in the Dwight Harris Basketball Summer League (DHBSL), the road to Championship Saturday became a little shorter Wednesday evening, July 28. On that evening, both the 14U Baylor and UCLA squads and the 17U Gonzaga team won their first round games in the DHBSL Playoffs at the Americus-Sumter Ninth Grade Academy.

The game between the 14U Baylor Bears and the Houston Cougars was wire to wire most of the way, but the Bears were able to pull out a 47-42 victory. Amari Hubbard led Baylor with 13 points and Jayslten Bobbs chipped in 11 points, with nine of them coming from three three-pointers. Joshua Coleman led the Cougars in scoring with 16 points. 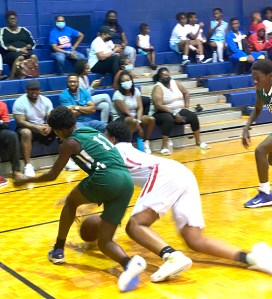 Baylor’s Jaseph Jordan (#11) and Houston’s Covery Hill (#10) fight for a loose ball during a DHBSL playoff game between the 14U Houston and Baylor teams.
Photo by Ken Gustafson

The win vaults Baylor into the semifinal game against Gonzaga, which will take place on Thursday, July 29 at 5 p.m. The winner of that game will play UCLA in the 14U DHBSL Championship Game on Saturday, July 31 at 12:15 p.m. UCLA booked its spot in the championship game by defeating the 14U Arkansas Razorbacks 37-33 on Wednesday night. At halftime, the Bruins trailed Arkansas 23-13, but they went on a 20-6 run in the second half that was capped off with a basket and three-point play by Labron Brown, which made the score 33-29 in favor of UCLA with 3:23 to go.

Brandon Pope of the 17U Gonzaga team (#4) blocks the shot of Travian Lamar of UCLA.
Photo by Ken Gustafson

The Bruins were able to maintain the lead for the rest of the way and ended up winning the contest 37-33.  Brown led UCLA with 18 points and Jaboris Scott scored 12 to lead the Arkansas squad.

There was one 17U playoff game on Wednesday night between UCLA and Gonzaga. In that game, the Bulldogs took control early and dominated the rest of the way en route to a 49-28 victory. Brandon Pope led the way for Gonzaga with 14 points and John Henry Crisp poured in 12 points in the winning cause. Tyquan Robinson led UCLA with 13 points. 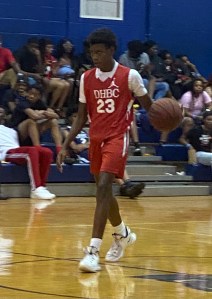 Omari Woodard (#23) of the 14U Arkansas team scored 11 points in the loss to UCLA in the 14U DHBSL Playoffs.
Photo by Ken Gustafson

The Bulldogs will now face Arkansas in the semifinals on Friday, July 30 at 5 p.m. The winner of that game will face the winner of the game between the 17U Houston and Baylor squads, which will be played on Thursday, July 29 at 8 p.m. The winner between Houston and Baylor will get an automatic berth into Saturday’s championship game, in which they will face the winner of the Arkansas/Gonzaga contest. Tip time for the DHBSL 17U Championship Game is scheduled for 2:45 p.m. on Saturday, July 31. 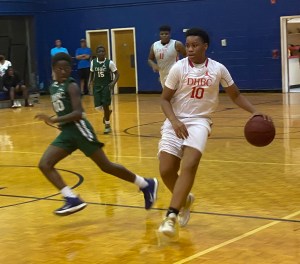 Covery Hill (#10) of the 14U Houston team runs the offense against Baylor.
Photo by Ken Gustafson