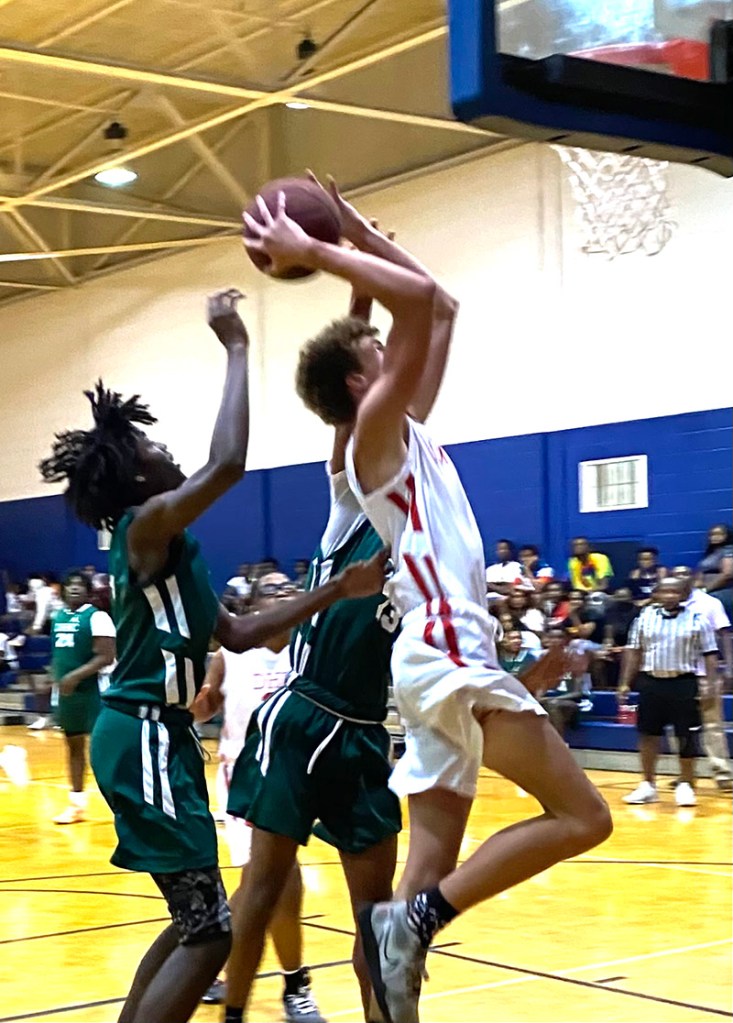 17U Houston forward Buddy Brady, who plays his high school ball at Southland Academy, goes up and scores against the 17U Baylor team in the semifinals of the DHBSL 17U Playoffs. Brady scored 10 points to help lead Houston to victory. Photo by Ken Gustafson

In the semifinal game of the 14U Division between Gonzaga and Baylor, it took two extra periods to decide it, but Gonzaga was able to come out on top by the score of 53-49. With just 0.2 seconds left, the Bulldogs led 43-42, but Baylor’s Tirvin Jordan drove to the basket and was fouled. Jordan had the chance to make both foul shots to give the Bears the victory, but could only make one of two, sending the game into its first overtime period. 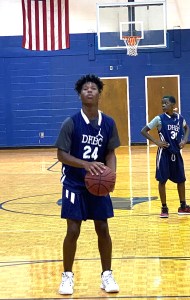 Jaquavion Moses is seen here at the foul line shooting free throws for 14U Gonzaga. Moses led the Bulldogs with 33 points in their double-overtime 53-49 victory over Baylor.
Photo by Ken Gustafson

The game could not be decided in the first overtime, necessitating a second overtime period. However, in this second overtime, the Bulldogs of Gonzaga were able to edge out the Bears 53-49 and punch their ticket to Saturday’s championship game against UCLA, who defeated Arkansas 37-33 on Wednesday in the other semifinal game. Jaquavion Moses took over the second overtime period for Gonzaga and led the Bulldogs with a total of 33 points on the night. Jordan Tatum was also in double figures for the Bulldogs as he scored 13 points. Amari Hubbard led the 14U Baylor Bears with 24 points in the loss. Gonzaga will face UCLA in the DHBSL 14U Championship Game on Saturday, July 31 at 12:15 p.m. 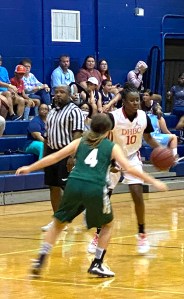 The next two games of the night were the semifinal games of the DHBSL Girls’ League. The first semifinal featured the Lady Cougars of Houston against the Lady Bears of Baylor. During the first half, it was a close contest, with Houston only leading 11-8 at one point. However, things totally changed in the second half as the Lady Cougars, led by Schley County High School Freshman Jesstynie Scott, went on an 18-3 run to blow the game open. Houston used high-pressure defense to force turnovers and they turned many of those turnovers into fast break baskets. As a result, the Lady Cougars went on to win comfortably by the score of 39-14.

Scott led all scorers with 20 points and her teammate, Cornecia Luster, poured in 12 points. Kamiyah Barrow led the Lady Bears with six points. 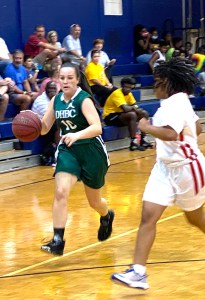 Morgan Weaver (#10) pushes the ball up the court for the DHBSL Baylor Lady Bears against Houston. Weaver, who plays her high school ball at Southland Academy, scored four points in the loss to the Lady Cougars.
Photo by Ken Gustafson

In the second semifinal game of the girls’ division between Gonzaga and UCLA, the contest was a much more competitive affair, with the Lady Bulldogs holding on to a 19-16 lead at the half. However, the Lady Bulldogs were able to pull away late in the second half as Riley Mitchell, who plays her high school ball at Southland Academy, scored 19 of her game total of 27 points in the second half to lead Gonzaga to a 42-31 victory. Ja’Layah Tatum scored eight points. Deira Clark had four and Emma Hayes chipped in three points for Gonzaga in the winning cause. Aliyah McGarrah led UCLA in scoring with 12 points. 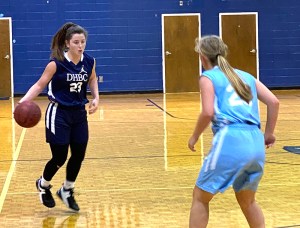 Gonzaga guard Riley Mitchell (#23) scored 27 points to lead the Lady Bulldogs to a 42-31 victory over UCLA in the semifinals of the DHBSL Playoffs. Mitchell plays her high school ball at Southland Academy.
Photo by Ken Gustafson

The Lady Bulldogs will now set their sights on a league championship, as they will take on the Lady Cougars of Houston in the DHBSL Girls’ Championship Game on Saturday, July 31 at 1:30 p.m.

The final game of the evening featured two strong teams from the 17U Division: Houston and Baylor. The winner would ensure their spot in the DHBSL 17U Championship Game on Saturday. The first half was a low-scoring affair, but the Cougars of Houston went into halftime with a 19-9 lead. For much of the second half, the Cougars were able to maintain that lead until the Bears made a run to cut the Houston lead to 46-41. However, Baylor’s last-ditch effort would fall short and the Cougars went on to win 48-41. 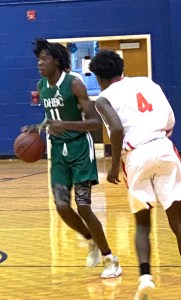 : Latravis Angry (#11) scored 15 points to lead the 17U Baylor Bears in their 48-41 loss to Houston in the semifinals of the DHBSL Playoffs.
Photo by Ken Gustafson

Cedric Smith led Houston in scoring with 14 points and Buddy Brady poured in 10. Devon Dowdell almost made the double figure mark as he scored nine points on the night for the Cougars. As for Baylor, the Bears were led in scoring by Latravis Angry, who led all scorers with 15 points. 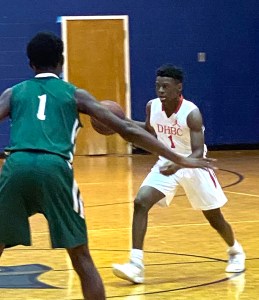 Cedric Smith (#1) of the DHBSL 17U Houston Cougars led his team in scoring with 14 points in their 48-41 victory over Baylor.
Photo by Ken Gustafson

With the win, the Cougars have punched their ticket to the DHBSL 17U Championship Game on Saturday at 2:45 p.m. and will now await the winner of the other 17U semifinal game between Gonzaga and Arkansas. That game will take place on Friday, July 30 at 5 p.m. 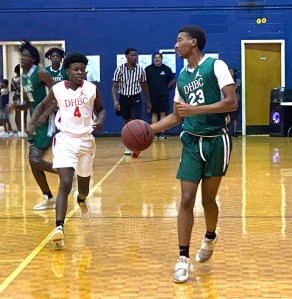 : 17U Baylor Guard Carlos Tyson (#23) scored six points for the Bears in their loss to Houston.
Photo by Ken Gustafson 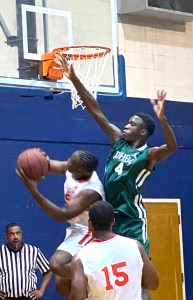 Jaquon Bowens (#4) of the 17U Baylor squad goes up to block a shot against Houston.
Photo by Ken Gustafson