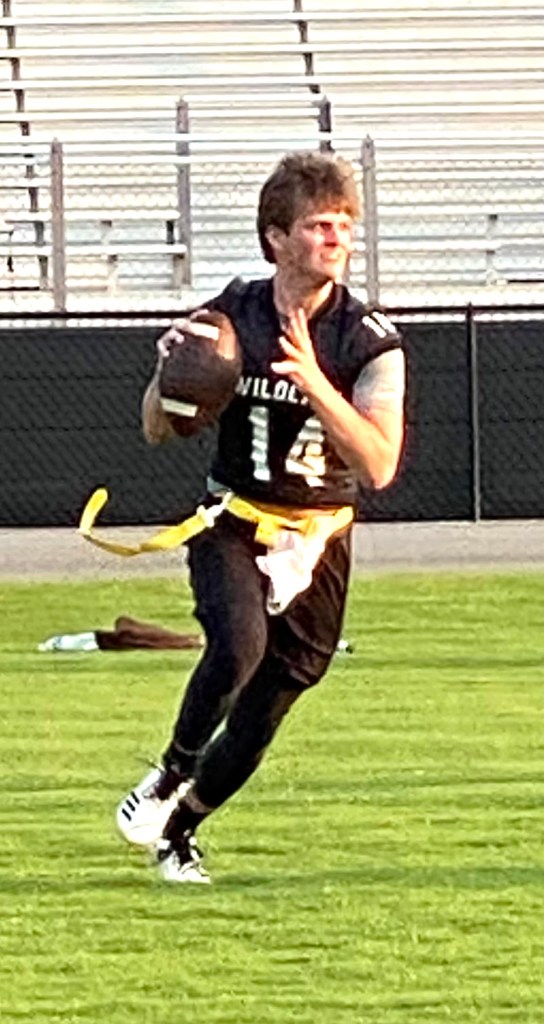 ELLAVILLE, GA – In Friday, July 30, several former Schley County High School football players from as recent as last year to as far back as 2005 took the field at Wildcat Stadium to participate in a 7-on-7 alumni football game.  It was a fun time of competition, fellowship and sportsmanship for the players and it gave them a chance to rekindle their fond memories of competing as Wildcats. It was also a fun time for the fans in the stands as they got to see some of the great Schley County players from years past.

“It was great just to have everybody come back and to see the school spirit rise out here tonight,” Schley County Head Football Coach Darren Alford said. “When you bring people back for an event like this, people get excited about it. The fans were great. Everything that we did out here was great and I just enjoyed the atmosphere and the love that everybody showed to each other. It was fun. We came out here to have fun and to play a game for fun. The white team won 12-6, but you know what, we’re all Wildcats so everybody won here tonight.” 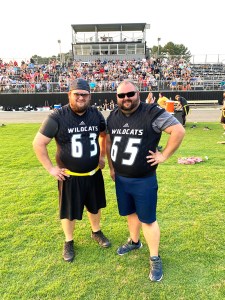 Alford went on to thank his wife Jenny for all of the hard work that she put in to making this event possible. “My wife, Goodness! She did all this,” Alford said. “I don’t think it was me. It was her. She did all the behind the scenes stuff. Miss Jenny did a great job helping get this stuff done. I’ve got to give her a lot of credit for what went on tonight.”

The players were divided up into teams. One team wore the black SCHS jerseys and the other team wore the white ones. The game was a seven-on-seven game with substitutes coming in and out. Some of the players participating were seniors on the Wildcat Football Team a year ago, such as Luke Renfroe, Jacob Long and Logan Elliot. Garrett Peavy, who started at quarterback for SCHS from 2018-2020, was the quarterback of the black team. Peavy’s high school teammates, Dartavious Napper, Trey Sampson and JaMyron Clayton, were also on hand to participate. 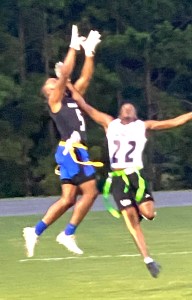 There were also players from as long ago as 2005 who were participating on this memorable evening, such as Lance Tele, who graduated from SCHS in 2005. “This is an amazing feeling,” Tele said. “It’s been, gosh!, almost 20 years since I’ve been on this football field, so to me, this is like reliving a childhood memory. I enjoy it. This is a great event.” Tele lives in Schley County with his wife and children and is currently and instructor at Central Georgia Tech in Warner Robins.

Carmetrick Ross graduated from SCHS in 2009, for him, it was an honor to be back home. “It’s an honor to come back and see the majority of my classmates that I haven’t seen in years and to give Wildcat Country something to be proud of and try and build a tradition here,” Ross said. 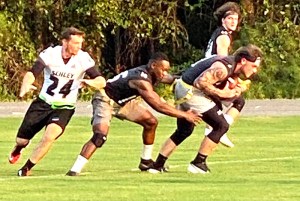 As far as the actual game was concerned, the white team did indeed win 12-6, but players on both teams showed that they haven’t lost too many steps.

Neither team scored in the first half, but in the second half, both teams came alive. The white team ended up taking the lead in the game when Charvis Mann scored very late in the game. Dartavius Napper, who was playing for the white team, also scored a touchdown on a long pass play from quarterback Jack Peavy (2014). 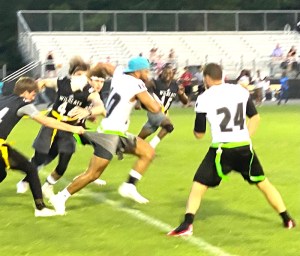 There were also some defensive plays made in the game, such as interceptions by Carmetrick Ross (2009) and Cullen Cuey (2014). However, as Alford said, no matter what the score was, every Wildcat was a winner on this night.

After the game, Coach Alford thanked the players of both teams for their sportsmanship and said that there will be another alumni game such as this in the future.