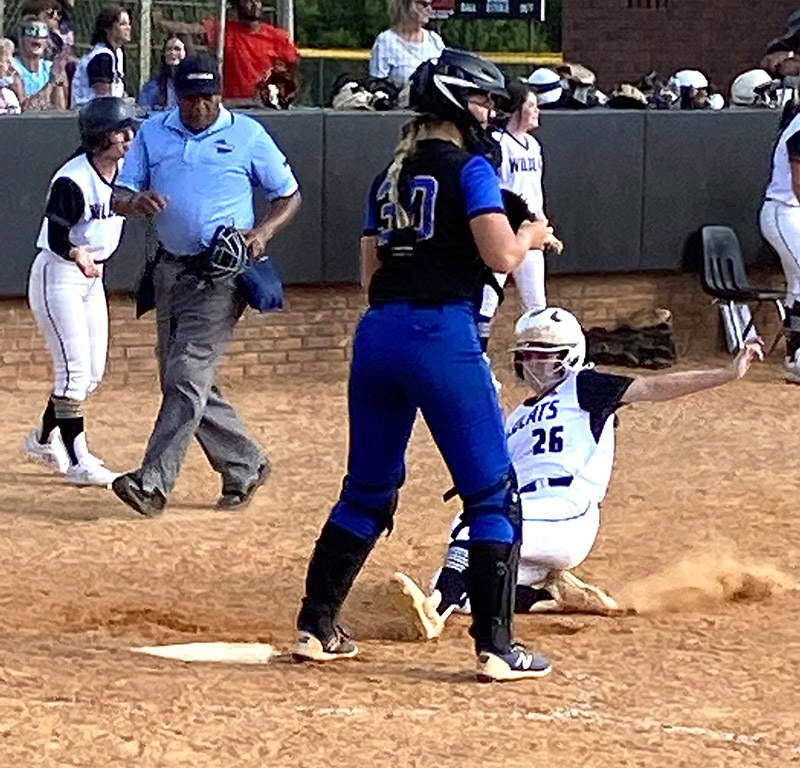 ELLAVILLE – Neither the Schley County Wildcats nor their opponents: Crisp County, expected the season opener for both teams to go as it went, but it was an exciting extra-inning thriller nonetheless. Unfortunately for the Wildcats, they ended up on the wrong side of the scoreboard. Leading 5-3 in the top of the seventh inning, SCHS had a chance to close the game out against CCHS, but the Cougars scored two runs to tie the game. Neither team could score a go-ahead run in the eighth, but in the top of the ninth, CCHS scored two runs to take the lead and held SCHS scoreless in the bottom of the ninth to win the game 7-5 on Thursday, August 5 at Wildcat Park.

Though he was disappointed with the outcome, SCHS Head Coach Jody Sellars was pleased overall with how his team performed, especially considering the fact that they had lost 11-4 to Cook High School in their final scrimmage game the day before.

“I wasn’t ready for an extra-inning game in the first game of the year, but it was an exciting game,” Sellars said. “I wish we could have held the lead. It wasn’t really all that bad. We had a scrimmage game yesterday and we didn’t play really well, so it was encouraging to see the girls come back and compete and at least play at a higher level.” 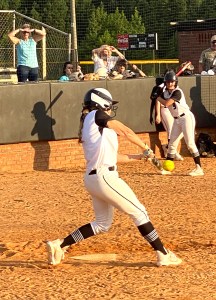 Schley County first baseman Berkley Goodin went 2 for 4 and belted a two-run homer in the bottom of the sixth to give the Wildcats a 5-3 lead over Crisp County.
Photo by Ken Gustafson

Lizzie Barineau got the start in the circle for SCHS and pitched eight innings. She gave up five runs on seven hits, walked two batters and struck out four.

McKenna Wurtz pitched one inning of relief for the Wildcats and gave up two runs on two hits. She walked three batters and struck out one.

SCHS got on the board first in the bottom of the first. With one out, Molina doubled to left field. After Landry Whaley advanced Molina to third on a fielder’s choice, Goodin drove Molina in on an RBI single to give the Wildcats a 1-0 lead. 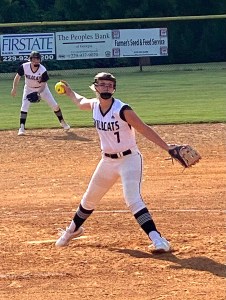 CCHS tied the game at 1-1 in the top of the third when Sydney Young drove in Blakely Young on an RBI single. but the Wildcats countered in their half of the third. With one out and a runner on first, Molina belted an RBI triple to center field. Later on in the frame, Goodin drove in Molina on a sacrifice fly, giving the Wildcats a 3-1 lead.

However, later on in the top of the sixth, the Cougars responded by scoring two runs to tie the game at 3-3. With the bases loaded and nobody out, Peyton Bozeman drove in Reagan Bozeman on a sacrifice fly and Macy West would later drive in Olivia Holliday on a sacrifice fly to tie the game at 3-3. However, in the bottom of the sixth, the Wildcats once again landed a counter punch. After Landry Whaley reached on an error to lead off the frame, Goodin promptly drilled a two-run homer over the left field wall to give SCHS a 5-3 lead. The Wildcats were not able to further add to their lead in the sixth, but as the Cougars came up to bat in the top of the seventh, the Wildcats were three outs away from victory. 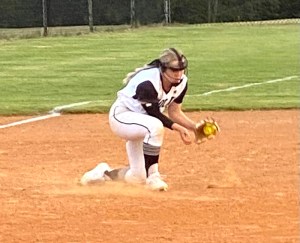 However, CCHS had other plans in the top of the seventh. Peyton Adkins led off the inning with a single and Sydney Young drew a walk to put runners at first and second for the Cougars with nobody out. Then Reagan Bozeman singled to left field to load the bases. Holliday would then drive in a run by drawing a walk, making the score 5-4 SCHS.

Fortunately for the Wildcats, the Cougars’ Kate Raines hit a line drive right to Whaley at third base, who then tagged out Young as she tried to get back to third for a double play. At the time, that defensive play by Whaley seemed to be the crucial play that would lead SCHS to victory. However, with Reagan Bozeman still at second for the Cougars with two outs, Peyton Bozeman was able to drive in the tying run on an RBI double.

In the bottom of the seventh, the Wildcats were able to get a runner into scoring position. With one out, Maddie Walker drew a walk and Molina singled to centerfield. However, Whaley popped out on an infield fly and Goodin struck out swinging. The game would have to be decided in extra innings. 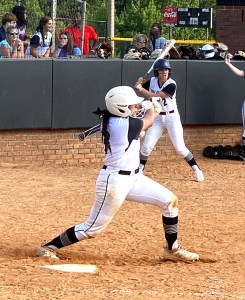 Schley County’s Zoe Molina went 3 for 5 at the plate with a double, a triple, two runs scored and an RBI in the Wildcats’ 7-5 loss in extra innings to Crisp County.
Photo by Ken Gustafson

Neither team could break the 5-5 deadlock in the eighth and it would take another inning to decide the outcome. In the top of the ninth with one out, Holliday tripled and Raines drew a walk, putting runners at first and third for the Cougars with one out. Peyton Bozeman popped out to second base for the second out, but Holliday was able to score on a passed ball. Olivia Bridges then reached on an error that allowed Raines to score from third. As a result, the Cougars had a 7-5 lead and the Wildcats would get one last chance to tie or win the game in the bottom of the ninth.

Unfortunately for SCHS, a dramatic come-from-behind victory was not to be on this day. Things started out promising for the Wildcats as Lizzie Barineau reached on an error to lead things off. Brenna Jacobs popped into a fielder’s choice, advancing courtesy runner Liberty Justice to second. With one out, Maddie Walker came to the plate as the tying run. However, Walker popped out to second base and Molina then flew out to centerfield for the final out of the game.

“Tip your hat to Crisp. They’re a good team. They always have been. They have a good program. They’re scrappy and they’re not going to lay down and just let you win the game,” Sellars said. “But it was nice to see some fight out of our girls. We’ve just got a few small things here and there to clean up. Our pitching did well for the most part.”

As for the Cougars, they were led offensively by Reagan Bozeman, who went 2 for 5 with two RBIs and two runs scored. Olivia Bridges started in the circle for CCHS. In five innings of work, Bridges gave up five runs on five hits and struck out five SCHS batters. Reagan Bozeman came on in relief of Bridges and pitched four scoreless innings, giving up only two hits, walking one and striking out three.

The Wildcats will try to rebound from this opening setback and earn their first win of the season when they host Mount de Sales Academy on Tuesday, August 10 at 5:30 p.m.