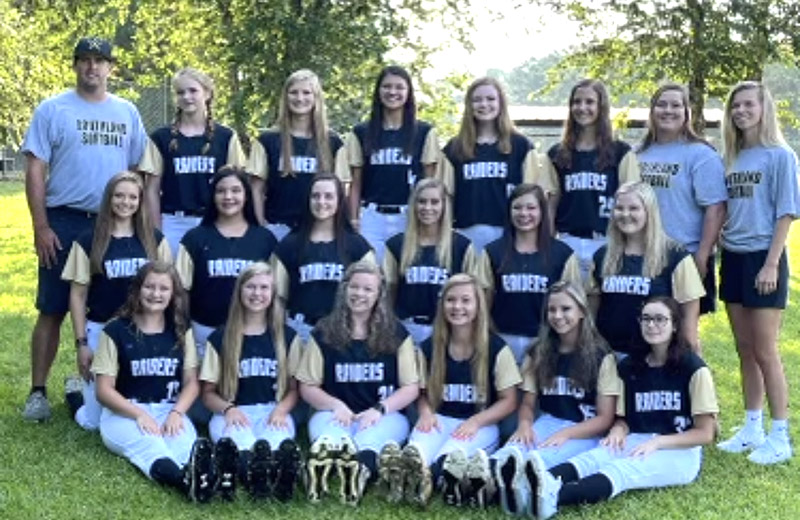 MACON – Despite outhitting the Lady Vikings 11-5, the Southland Academy Softball Team (SAR) fell in its season opener to First Presbyterian Day School by the score of 8-5 on Tuesday, August 10 at the FPDS softball complex in Macon.

The Lady Raiders fell behind 5-1 over the first three innings and though they were able to cut their deficit to 5-3 with two runs in the top of the fifth, the Lady Vikings countered with three more runs in the bottom half of the inning.

SAR tried to rally in the top of the sixth and scored two runs on a two-run triple by T.J. Bowden, but it was not enough as the Lady Vikings would go on to win.

“Even though we lost, I’m still very optimistic about the season,” SAR Head Coach Blaze Hargrove said. “We played hard and competed, so I was proud of them for that! Ultimately, walks and errors hurt us today, but those are able to be corrected!! We will keep working and try to correct some of these mistakes and when we do, we will be just fine!”

Bowden, Landry Hart and Avery Ledger each went 2 for 3 at the plate in this game and Bowden drove in three RBIs and scored a run. However, though the SAR offense did well at the plate, the defense struggled as the Lady Raiders committed five errors in the contest, allowing FPDS to take advantage.

The Lady Vikings got on the board first in the bottom of the first. With runners on first and second with one out, Alanna Porter reached on an error that allowed two runs to score. Cammie Frame then knocked in Porter on an RBI single and FPDS enjoyed a 3-0 lead.

The Lady Raiders were able to counter with a run in the top of the second when Jadie Burrell was able to score on a passed ball.

In the bottom of the third, FPDS scored another run when Saylor Hill scored on a passed ball. Later on in the inning, Porter would score on another passed ball to give the Lady Vikings a 5-1 advantage.

SAR fought to get back in the game in the top of the fifth by scoring two runs on three hits. The big hit in the inning was an RBI double by Bowden. However, the Lady Vikings responded with three more runs on a hit, an error and three walks to take an 8-3 lead.

The Lady Raiders tried to claw their way back once again in the top of the sixth when Bowden belted a two-run triple to right field, making the score 8-5 in favor of FPSD.

The Lady Raiders were able to hold the Lady Vikings in the bottom of the sixth and in the top of the seventh, things got off to a promising start for SAR when Burrell and Ledger notched back-to-back singles to put runners on first and second with nobody out.

However, Ila Johnson flew out to centerfield for the first out and both Samantha Wojnar and Morgan Minick struck out to end the game.

SAR will try to rebound from its season-opening loss when the Lady Raiders host Deerfield-Windsor on Thursday, August 12 at 4 p.m.