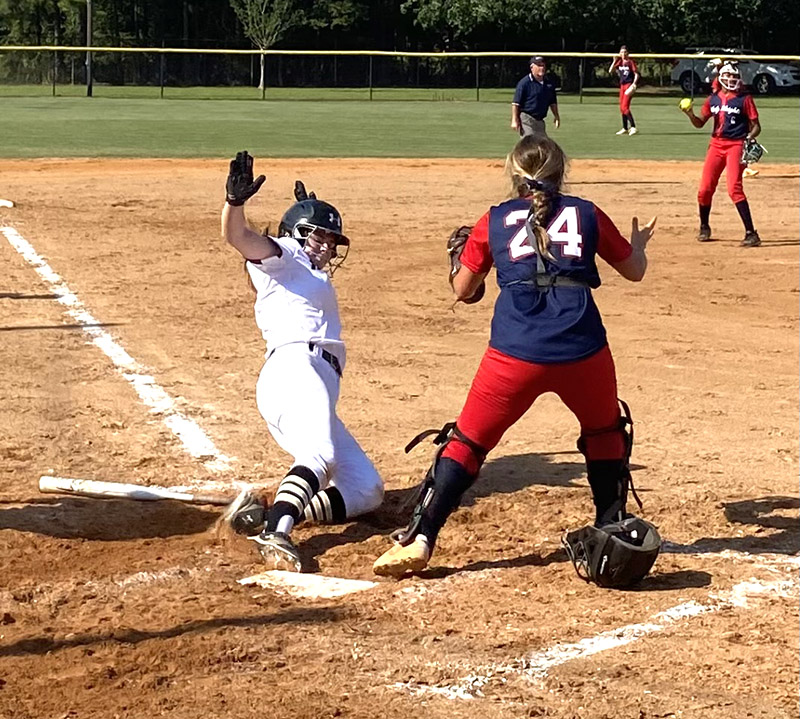 Southland Academy right fielder T.J. Bowden scores one of the Lady Raiders’ eight runs in their 8-3 win over Deerfield-Windsor. Bowden went 2 for 3 at the plate with two RBIs and two runs scored. Photo by Ken Gustafson

AMERICUS – Coming off an 8-5 loss in their season opener at First Presbyterian Day School on Tuesday, August 10, the Southland Academy Lady Raiders (SAR) came into their home opener against their archrivals Deerfield-Windsor (DWS) poised and ready to nail down their first win of the 2021 season.   In the bottom of the first inning, they sent that message by scoring four runs on three hits and taking advantage of an error. That momentum lasted throughout the rest of the contest as SAR added two more runs in the third and two in the fifth to secure an 8-3 victory over the Lady Knights on Thursday, August 12 at Southland Academy. 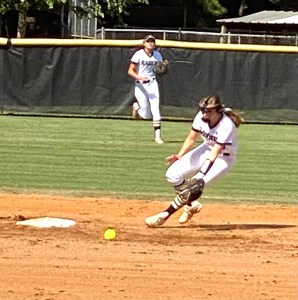 Ila Johnson got the start in the circle for the Lady Raiders, but struggled during her two innings of work. Johnson gave up three runs on four hits, walked four batters and struck out one. Maddie Godwin came on in relief of Johnson in the third and was able to settle things down. In four innings of work, Godwin didn’t allow a run and only gave up one hit, while striking out three.

Going into the top of the second, the Lady Raiders had a four-run lead, but DWS responded with two runs of their own. With one out, a pitch from Johnson hit Julia Watson. Johnson regained her composure by striking out Ellie Morgan for the second out, but walked the next three batters she faced. The third of those walks ended up scoring a run for the Lady Knights. Tamia Brown then drove in Sara Sternberg on an RBI single to make it 4-2 SAR. However, Johnson rebounded by getting Anna Morey to ground into a fielder’s choice to end the threat.

The Lady Knights crept closer by scoring a run in the top of the third. With the bases loaded and one out, Milla McEwen was picked off second base for the second out, but Sara Sternberg was able to draw a walk, scoring Hannah Rushton from third. 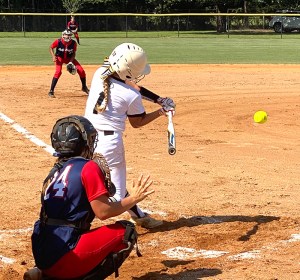 Southland Academy catcher Avery Ledger tries to get the bat on the ball against Deerfield-Windsor. Ledger went 0 for 2 at the plate, but scored a run and drew a walk.
Photo by Ken Gustafson

SAR responded in its half of the third by taking advantage of two DWS errors and scoring two runs. They would later score two more runs in the bottom of the fifth on another DWS error and on an RBI single by Weaver to secure the 8-3 win.

Both SAR and DWS each had five hits in the contest, but the Lady Raiders were able to take advantage of six errors committed by the Lady Knights.

SAR will try to build on their success when they travel up to Macon to take on Windsor Academy on Tuesday, August 17. First pitch is scheduled for 5 p.m.