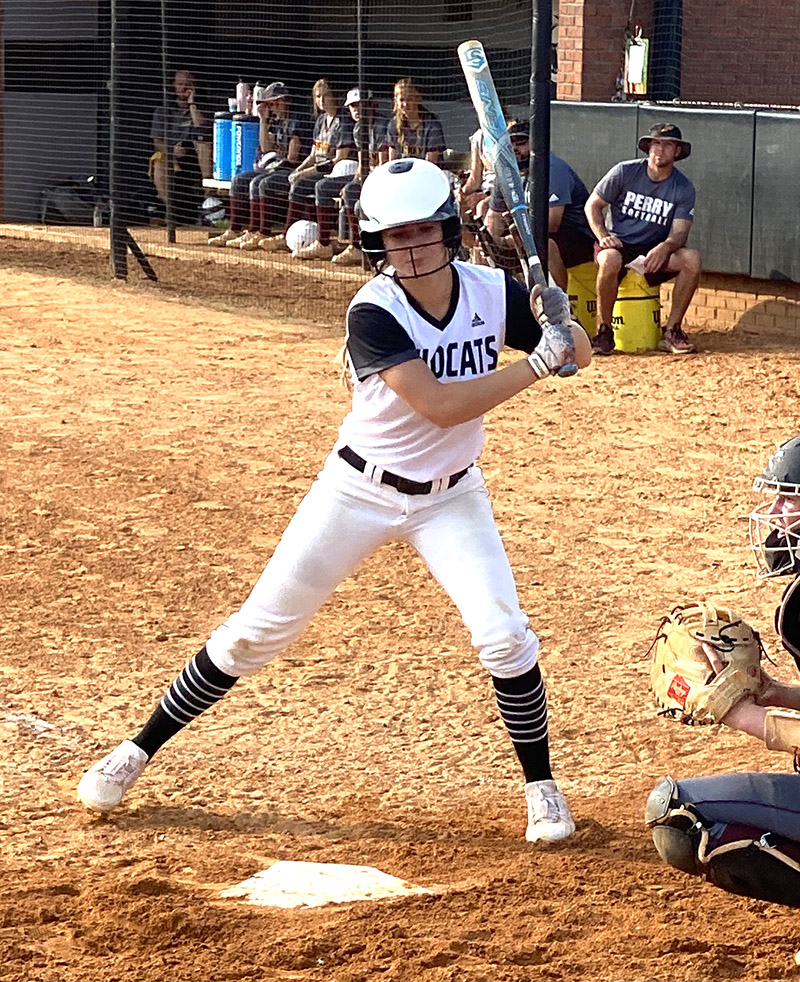 Schley County first baseman Berkely Goodin went 2 for 3 at the plate with three RBIs and two runs scored in the Lady Wildcats’ 13-11 loss to Perry. Photo by Ken Gustafson

ELLAVILLE – The Schley County Lady Wildcats Softball Team (SCHS) got off to a great start against the Lady Panthers of Perry on Wednesday, August 11 at Wildcat Park. After the first three innings of play, the Lady Wildcats had a 9-3 lead. However, PHS changed the momentum of the game by scoring five runs in the top of the fourth. That fourth inning seemed to be a turning point as the Lady Panthers scored three more runs in the fifth to take an 11-9 lead. In the sixth, PHS added two more insurance runs that proved to be crucial. Though SCHS scored two of its own in the bottom of the sixth, it would not be enough as the Lady Panthers would go on to win 13-11 in a slug fest that saw a total of 29 hits between both teams.

“I was pleased with our offensive output. They (PHS) made a couple of errors and gave us a little bit too,” SCHS Head Coach Jody Sellars said. “We’re looking better offensively. Defensively and in the circle, we’ve got to do a better job. We’ve talked about it. They know it. We know it. We’ve got to throw more strikes.”

Sellars went on to say that at one point in the game, PHS had gotten 36 at bats, but of those 36 at bats, only nine of them began with first-pitch strikes, meaning that the SCHS pitchers were struggling to get ahead in the count. “You’ve got to be a little better than that…force contact early in the counts and get ahead with strike 1,” Sellars said. “Usually, when you’re throwing strikes and you are working ahead in the count, your defense tends to play a little bit better behind you. Unfortunately for us right now, it’s going hand in hand.”

Sellars’ assessment of his club’s pitching and defensive performances in this game was shown to be accurate due to the fact that the Lady Wildcats committed five errors on the day and that SCHS pitchers Lizzie Barineau and Makena Wurtz combined to give up 13 runs on 18 hits, though six of those runs were unearned. 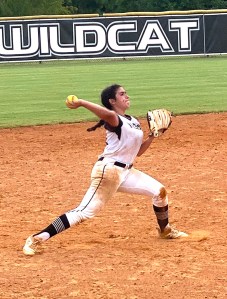 SCHS third baseman Zoe Molina makes a throw over to first base to get the runner out. Molina went 2 for 4 at the plate and scored three runs in the loss to Perry.
Photo by Ken Gustafson

Barineau, who started in the circle for the Lady Wildcats, pitched the first four innings and gave up eight runs on eight hits, though two of those runs were earned. She walked three batters and struck out two. Wurtz came on in relief of Barineau, but also struggled, giving up five earned runs on 10 hits. However, she did not walk anyone and had one strikeout.

The Lady Wildcats posted a strong offensive performance in the contest as four players had multi-hit games. Berkely Goodin led the way by going 2 for 3 with a double, a single, three RBIs and two runs scored. Zoe Molina had a strong day as she went 2 for 4 and scored three runs. Destiny LeCroy had a multi-hit performance as well by going 2 for 4 with two RBIs and a run scored, and Brenna Jacobs went 2 for 4 and scored two runs.

The Lady Panthers jumped out to a 3-0 lead in the top of the first on four hits and were aided by an error, but SCHS responded with five runs in the bottom half of the inning. Maddie Walker led off with a single. Molina was able to reach on an error and Landry Whaley was hit by a pitch to load the bases for Goodin. Goodin was able to drive in the Lady Wildcats’ first run of the game by drawing a walk off PHS starting pitcher Reagan Hughes. LeCroy followed that up with an RBI single to put SCHS within a run at 3-2. After Liberty Justice popped out to left field for the first out, Makena Wurtz was able to drive in the tying run on a fielder’s choice. Mackenzie Pugh then reached on an error that allowed both LeCroy and Goodin to score to give SCHS a 5-3 lead. 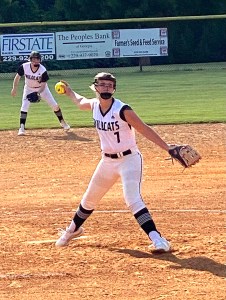 SCHS pitcher Lizzie Barineau is in action against Perry.
Photo by Ken Gustafson

The Lady Wildcats continued their onslaught in the bottom of the second by scoring three more runs on three hits. Maddie Walker led off the frame with a walk and Molina followed that up with a single, putting runners on first and second with nobody out. After Whaley made the first out on an infield fly, Goodin drove in Maddie Walker on an RBI single to give SCHS a 6-3 lead. LeCroy followed that up with an RBI single of her own and Justice was able to drive in the Lady Wildcats’ eighth run on a fielder’s choice.

In the bottom of the third, SCHS added another run to take a 9-3 lead, but things would soon change drastically. In the top of the fourth, the Lady Panthers scored five runs on three hits and took advantage of two errors and a walk. The big hit in the inning was a two-run double by Hughes. Just like that, the Lady Wildcats’ six-run lead had dwindled down to just one.

That five-run inning seemed to be the turning point of the game as the momentum continued to swing in the favor of the Lady Panthers. They were able to score three more runs on four hits in the top of the fifth to take an 11-9 lead.

However, the Lady Wildcats didn’t quit. With one out and a runner on second, Goodin belted a two-run double to left field to bring SCHS to within two runs at 13-11.

SCHS pitcher Makena Wurtz was able to hold the Lady Panthers scoreless in the top of the seventh. This gave the SCHS offense one last chance to tie or win the game in the bottom of the inning. With one out, Wurtz singled to left field, putting the tying run on first. However, Makenzie Pugh hit into a fielder’s choice and Brenna Jacobs struck out to end the game.

Reagan Hughes led the PHS offense by going 3 for 5 at the plate with a double, four RBIs and two runs scored. She also pitched the entire game for the Lady Panthers, giving up 11 runs on 11 hits. She walked two batters and struck out two. 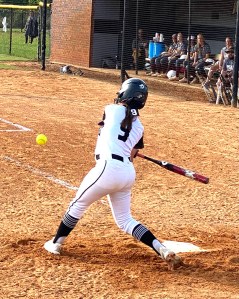 Schley County shortstop Destiny LeCroy went 2 for 4 with two RBIs and a run scored in the Lady Wildcats’ 13-11 loss to Perry.
Photo by Ken Gustafson

According to Sellars, most of the struggles that his club is having are with pitching and defense. “When we are struggling a little bit in the circle, we also struggle on defense,” Sellars said. “In most games here lately, we’re giving up some crooked numbers and it’s a little too much for us to overcome, but it’s a long season. We’ve got a long ways to go and we’ll work hard, we’ll correct it and we’ll get better.”

The Lady Wildcats are now 0-2 on the season and they will try to earn their first win when they host Crawford County Thursday, August 12 at 5:30 p.m.