Southland Academy starting pitcher Maddie Godwin struck out seven Westwood hitters to help lead the Raiders to a 13-5 win over the Wildcats. Photo by Ken Gustafson

In this contest against the Wildcats, the Raiders were able to belt out 12 hits, including Bowden’s home run in the bottom of the fifth to run rule the game.

“We had a much better approach at the plate today,” SAR Head Coach Blaze Hargrove said. “We went up there with a good mentality. We were attacking strikes early in the count. I’ve always been told the best way to not strike out is don’t get two strikes on you and we have bought into that mentality. We were attacking the ball early and often and good things happened today. It was a good day all around for us.”

The Raiders got multi-hit performances from Bowden, Morgan Weaver, Avery Ledger and Morgan Minick. Weaver went 2 for 3 at the plate with an RBI and a run scored and Bowden went 2 for 4 with the walk-off home run and two RBIs. 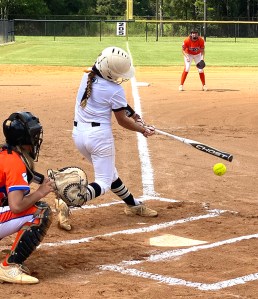 Southland Academy catcher Avery Ledger went 2 for 4 with two RBIs and two runs scored to help lead the Raiders to the victory over Westwood.
Photo by Ken Gustafson

Ledger and Minick both went 2 for 4 at the plate with two runs scored, with Ledger driving in two runs and Minick driving in one. The Raiders also got hits from Maddie Godwin, Jadie Burrell, Samantha Wojnar and Landry Hart.

SAR jumped out to a 2-0 lead in the bottom of the first inning. Bowden drove in the first run of the game on an RBI double and Weaver would later drive in Minick on an RBI single. However, the Raiders saved their best offensive output for the third inning, scoring nine runs on five hits and taking advantage of four errors and a walk committed by the Wildcats. With the bases loaded and one out, Jadie Burrell drove in Ila Johnson on an RBI single and Gracie Wilson then reached on an error that allowed two more runs to score, giving SAR a 5-0 lead.

After Eva Grace Studdard drew a walk off Westwood starting pitcher Robby Vann, Ledger was able to reach on an error that allowed Wilson to score. Burrell then scored on a passed ball to give the Raiders a 7-0 lead. 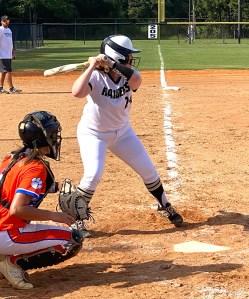 However, SAR was still not done. Morgan Minick drove in the eighth run for SAR on an RBI single and Godwin followed that up by reaching on an error that allowed two more runs to score. Bowden grounded out for the second out of the frame, but Landry Hart hit a fly ball to right field that was misplayed by the Westwood right fielder. That error allowed Johnson to score and the Raiders had an 11-0 lead after just three innings of play.

However, the Wildcats tried to fight back. In the top of the fourth, Bentley Palmer drew a leadoff walk from Godwin, who was the starting pitcher for the Raiders. Sarah Sheffield then reached on an error and the Wildcats had runners at second and third with nobody out. Vann then drove in two runs for Westwood on an RBI single to right field. Fortunately for SAR, Godwin was able to retire the next three batters to end the threat. 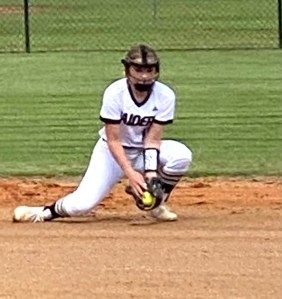 Southland Academy shortstop Morgan Weaver fields a ground ball. Weaver went 2 for 3 at the plate in the win over Westwood.
Photo by Ken Gustafson

The Raiders were able to add another insurance run in the bottom of the fourth. With two outs, Samantha Wojnar singled to left field and Ledger drove her in on an RBI double to center field. However, with two outs in the top of the fifth, the Wildcats found some more offense. With runners on first and second, Sheffield belted a two-run double to center field and Vann followed that up with an RBI double of her own. Just like that, the Wildcats had cut the Raiders’ lead down to 12-5, forcing the game to go on, as they were able to avoid getting run ruled.

However, the game would not last much longer, as the Raiders only needed one more run to end the game. In the bottom of the fifth with one out, Bowden drove a fly ball over the left field wall to end the game, giving the Raiders a 13-5 win. 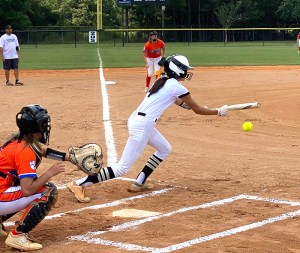 Southland Academy center fielder Morgan Minick lays down a bunt. Minick went 2 for 4 with an RBI and two runs scored in the win over Westwood.
Photo by Ken Gustafson

While the offense of the Raiders was strong in this game, so was the pitching. In a little over four innings of work, Maddie Godwin struck out seven Westwood batters, while giving up five runs on four hits and walking two.

Ila Johnson came on in relief of Godwin in the top of the fifth with two outs and was able to Strikeout Alyssa Howell to end the Wildcats’ threat.

The Raiders (2-2) will try to extend their winning streak to two games when they host Brookwood in region play on Monday, August 23. First pitch is scheduled for 4 p.m.