Wildcats rebound with strong offensive output in rout of Manchester 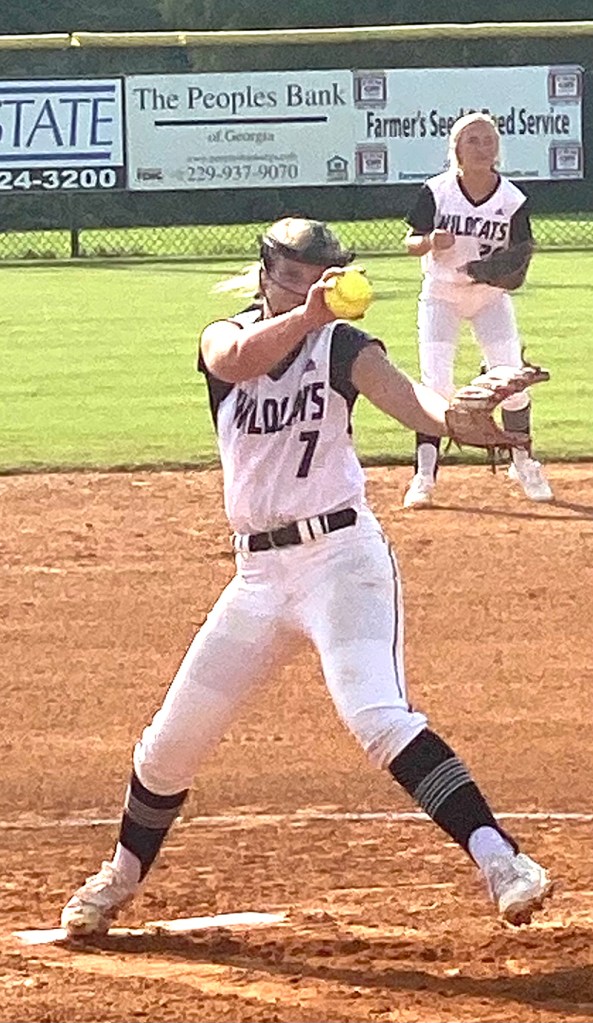 MANCHESTER, GA – After suffering a heartbreaking 4-3 loss at Veterans on Monday, August 23, the Schley County Wildcats Softball Team (SCHS) rebounded with a double-digit run performance against their region opponent Manchester and routed the Blue Devils 14-2 on Thursday, August 26 at Manchester High School.
The Wildcats were able to score 14 runs on 12 hits and played flawless defense in the field, committing no errors.
Four SCHS players had multi-hit performances in this game.  Lizzie Barineau, Berkeley Goodin, Zoe Molina and Maddie Walker each had two hits.  Goodin drove in two RBIs and scored three runs, while Barineau went 2 for 2 at the plate with three RBis.  Of the 10 Wildcats that had at least one at bat in the contest, eight of them had at least one hit.
The Wildcats also got the production that they needed in the circle.  Barineau started the game for SCHS and pitched two scoreless innings without allowing a hit and struck out two batters.  Makena Wurtz came on in relief of Barineau.  In her two innings of work, she gave up two runs on two hits, walked one and struck out three.
SCHS jumped out to a 3-0 lead in the top of the second inning.  With a runner on second and one out, Maddie Walker executed a bunt single, putting runners on first and third. After Lily Walker grounded out for the second out of the inning, Barineau drove in two runs on a single to left field.  Brenna Jacobs kept the inning going with an infield hit and Wurtz would later score to give SCHS a 3-0 lead.
But this was only the beginning.  The Wildcats had much more in their arsenal and they let it loose in the third and fourth innings.  In the top of the third, SCHS scored five runs on four hits.  One of the big blows came off the bat of Goodin, who belted a two-run double to left field.  Maddie Walker would later drive in Goodin on an RBI single and Barineau ended up giving the Wildcats a 7-0 lead on an RBI single of her own.  However, the inning didn’t end until Lily Walker scored on a passed ball to give the Wildcats an 8-0 lead.
SCHS was still not satisfied though.  In the top of the fourth, the Wildcats scored six runs on four hits and took advantage of an error and two walks.  Both Lily Walker and Emma Walker each drove in a run on RBi singles.
The Blue Devils scored two runs in the bottom of the fourth, but that was all the scoring they could muster, as SCHS would go on to complete the 14-2 rout.
The Wildcats (2-4) will try to build on this success when they continue region play at hone against Marion County on Tuesday, August 31.  First pitch from Wildcat Park is scheduled for 5 p.m.