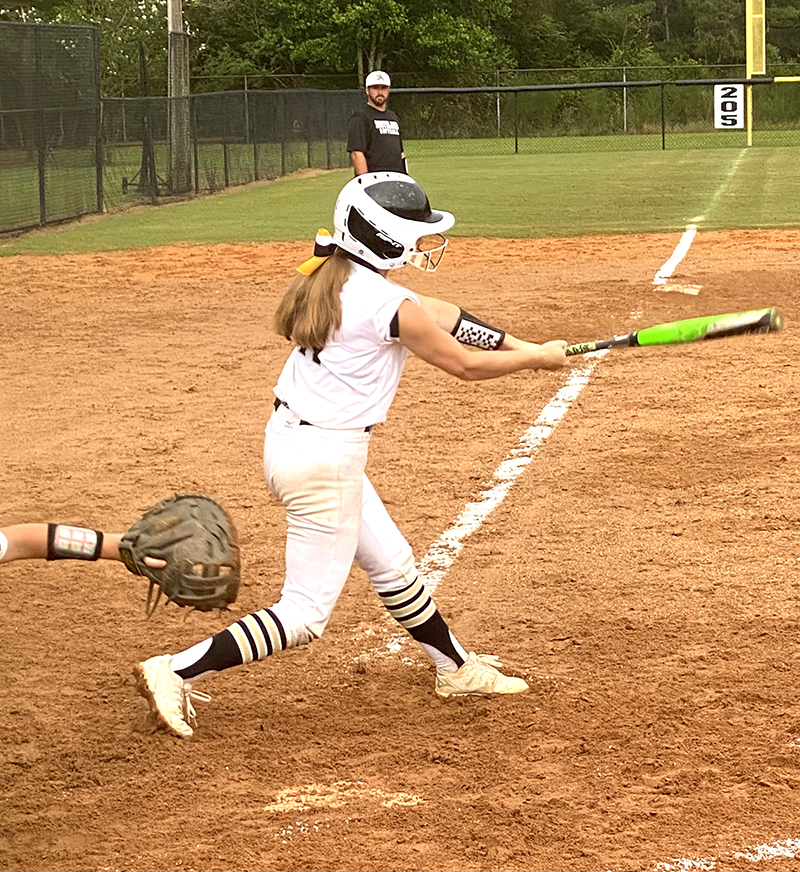 Southland Academy second baseman Samantha Wojnar executed an RBI bunt single in the bottom of the seventh inning of Game 2 to give the Raiders an 11-10 come-from-behind victory over Gatewood. Photo by Ken Gustafson

AMERICUS – In the bottom of the fifth inning of Game 2 of a doubleheader between Southland Academy (SAR) and the Gatewood School (GWS), the Raiders found themselves trailing 10-4 and were three outs away from getting swept, as they had lost Game 1 by the score of 15-8. However, SAR found a way back by scoring seven runs on four hits and taking advantage of two errors and two walks by the Gators.

With two outs, Eva Grace Studdard had just driven in two runs on an RBI double to bring the Raiders to within one at 10-9. Then Ila Johnson reached on an error that allowed Landry Hart to score the tying run. This set the stage for the heroics of Samantha Wojnar. With runners at first and third and two outs, Wojnar executed a bunt single, driving in Jadie Burrell from third and giving the Raiders an 11-10 come-from-behind victory in Game 2 on Saturday, August 28 at the Southland Academy Softball Complex. 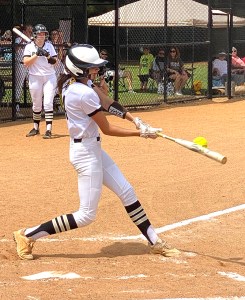 Southland Academy centerfielder Morgan Minick belted a two run home run in the Raiders’ 15-8 loss to Gatewood in Game 1 of a doubleheader.
Photo by Ken Gustafson

It was a glorious ending to a long, wet afternoon. Game 1 of the doubleheader began at 2 p.m. and Game 2 was scheduled to begin at 4 p.m., but because of rain and lightning in the area, Game 1 was delayed and Game 2 did not start until roughly 5:30 p.m.

“I think both teams were fairly evenly matched,” SAR Head Coach Blaze Hargrove said. “They (GWS) did a good job putting the ball in play and using their speed and it forced us to make some errors.”

While the Raiders did extremely well hitting the ball, in the two games combined, they struggled in the field, committing a total of 13 errors on the day. They had eight in Game 1 and five in Game 2.

“We made too many errors for my liking, but the girls never gave up,” Hargrove said. “They always compete and they had to battle weather adversity and we had a few breaks here and there because of the rain. I’m just super proud of them. Really, every aspect of the game we did well, except in the field. We’ve got to clean that stuff up. We’ve got to start making the plays that we are capable of making and we can be a really good team.”

T.J. Bowden led the Raiders’ offense by going 3 for 4 at the plate with two RBIs and two runs scored. Both Morgan Minick and Morgan Weaver each had two hits in Game 2. Minick went 2 for 2 and scored four runs, while Weaver went 2 for 3 with a double, two RBIs and a run scored. 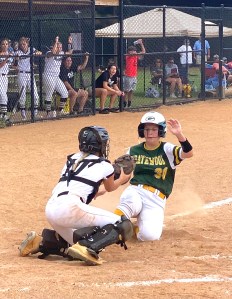 SAR used three pitchers in Game 2 against the Gators. Maddie Godwin got the start and gave up six runs on four hits, with two of those runs being earned. She walked three batters and struck out one. Chelci Woody came on in relief of Godwin. In one inning of work, Woody gave up four runs on three hits and walked one.

Ila Johnson was the third and final pitcher used by SAR in Game 2. Johnson pitched one scoreless inning and had one strikeout.

With the game tied at 1-1 in the top of the third, the Gators exploded for five runs on three hits, two walks, an error and a hit batsman. Riley Roberts made it 3-1 in favor of GWS by driving in two runs on an RBI double to left field. Ellie McMillan would later score on an error to make it 4-1 and Caleigh Bassett followed that up with an RBI single to left field. After Ashley Martin was hit by a pitch, Camille Kennedy scored on a wild pitch to put the Gators up 6-1. 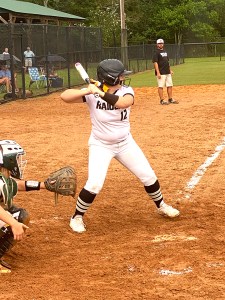 Southland Academy’s Eva Grace Studdard kept the Raiders alive in the bottom of the seventh inning of Game 2 against Gatewood by knocking in two runs on an RBI double.
Photo by Ken Gustafson

However, the Raiders countered with three runs of their own in the bottom half of the inning. Minick led off with a walk and Bowden doubled to left field, putting runners on second and third with no outs. After Landry Hart popped out in foul territory for the first out, Weaver drove in Minick and Bowden on a two run double to left field, bringing the Raiders to within three at 6-3. After Eva Grace Studdard popped out in foul territory, Gracie Wilson drove in another run on an RBI single.

Samantha Wojnar was able to reach on an error and Lauren Duke singled to load the bases, but Godwin popped out to first base to end the inning. 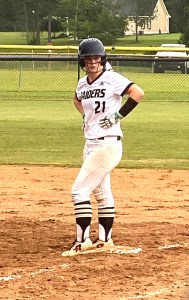 Southland Academy’s Lauren Duke is at first base after reaching on a single in the bottom of the third against Gatewood in Game 2.
Photo by Ken Gustafson

GWS countered in the top of the fourth with four runs on three hits and took advantage of two errors and a walk, but the Raiders were able to turn an important double play that prevented any further damage. In the bottom half of the inning, SAR was able to score a run when Landry Hart hit a sacrifice fly to centerfield that allowed Minick to score from third.

In the top of the fifth inning, Ila Johnson was able to hold the Gators scoreless, which proved to be crucial as the Raiders were about to stage their seven run comeback.

Wojnar ironically began the bottom of the fifth by reaching on an error that allowed her to advance to second base. After Lauren Duke grounded out to second for the first out, Maddie Godwin drove home Wojnar on an RBI single to make it 10-6 in favor of the Gators. Minick was able to draw a walk from GWS pitcher Riley Roberts and Bowden followed that up with an RBI single. Just like that, the Raiders were within three. 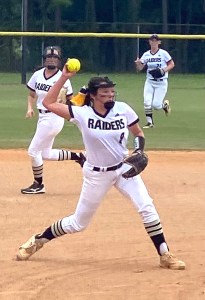 Southland Academy third baseman Jadie Burrell makes a play at third and throws to first during Game 1 of the Raiders’ doubleheader against Gatewood.
Photo by Ken Gustafson

Hart was then able to draw a walk from Roberts before Morgan Weaver popped out to second for the second out. However, Studdard was able to keep the inning and the Raiders’ hopes alive with a crucial two out, two run double, setting the stage for Wojnar’s walk-off bunt single.

Unfortunately for the Raiders, Game 1 did not have the same result. The weather made things difficult for both teams during Game 1 due to rain delays. However, going into the top of the seventh, SAR only trailed 7-6, but the Gators scored eight runs on four hits and took advantage of four walks and two errors. The Raiders tried to respond in the bottom of the seventh. With two outs and a runner on first, Minick belted a two run homer over the left field wall. Unfortunately for SAR, that would be their final offensive output as Bowden flew out to right field to end the game. 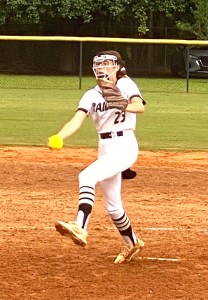 Southland Academy pitcher Chelci Woody is in the circle for the Raiders against Gatewood.
Photo by Ken Gustafson

Morgan Weaver led the Raiders’ offense by gong 2 for 3 with a double, an RBI and two runs scored. Landry Hart also had a multi-hit performance by going 2 for 4 at the plate with an RBI and a run scored.

The Raiders (4-4) will hit the diamond again on Tuesday, August 31 when they host Terrell Academy at 4 p.m.