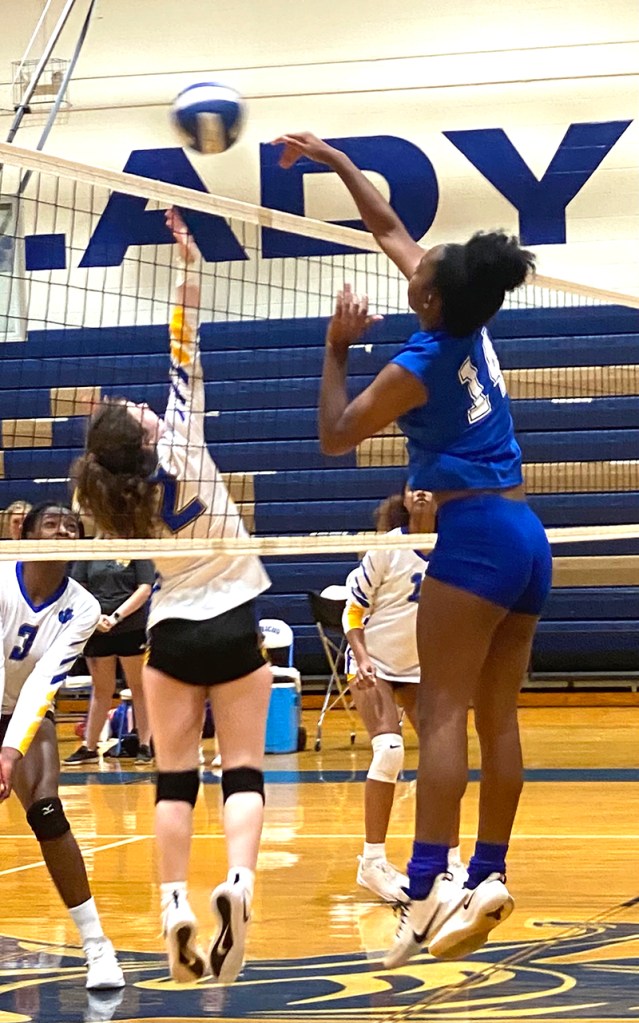 Sumter County Senior Outside Hitter Trinity Jackson (14) goes up for a kill against Crisp County. Photo by Ken Gustafson

AMERICUS – After scoring a 3-2 victory over Mitchell County for their first win of the season the day before, the Sumter County High School Lady Panthers’ Volleyball Team (SCHS) was hoping to make it two in a row against Crisp County (CCHS), who is playing volleyball for the first time in school history. The Lady Panthers were able to win the first set of a best-of-five-set match 25-18, but could not sustain that momentum against the Lady Cougars. Over the next three sets, SCHS struggled in receiving serves and, at times, committed some service errors. Though the next three sets were extremely competitive, the Lady Cougars were able to prevail by scores of 25-22, 25-21 and 25-22 to win the volleyball version of the “Battle of the Flint” on Tuesday, August 31 at the Panther Den.

“The thing with us is we get off to a hot start and after that, we kind of slow down,” SCHS Head Coach Alonzo Lockett said. “We’ve got to learn how to close out on games. Once we do that, we’ll do a good job. We have a pretty young team. For a lot of these girls, it’s their first or second year of playing volleyball ever, so we’re starting from the ground. We’re actually moving along at a faster pace than we thought we would, so we’re doing pretty good.” 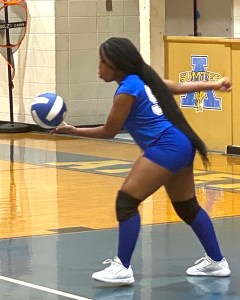 The second set was also a hotly contested set, with neither team able to pull away from the other. However, with the score tied at 21-21, a net violation was called against the Lady Panthers, giving the Lady Cougars a 22-21 lead. CCHS would go on to win the second set by the score of 25-22, tying the match at 1-1. 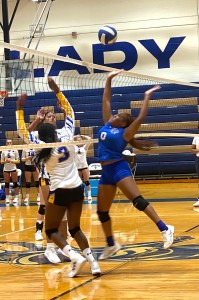 In the third set, the Lady Cougars jumped out to a 6-3 lead and would not relinquish their lead. SCHS stayed within striking distance, but could not overtake CCHS and lost the third set 25-21.

The Lay Panthers (1-3) will try to rebound from this setback and will try to earn their second win of the season when they travel up to Fort Valley, GA for a tri match at Peach County High School. The Panthers will play Peach County at 5 p.m. and will then play Chattahoochee County right afterwards.