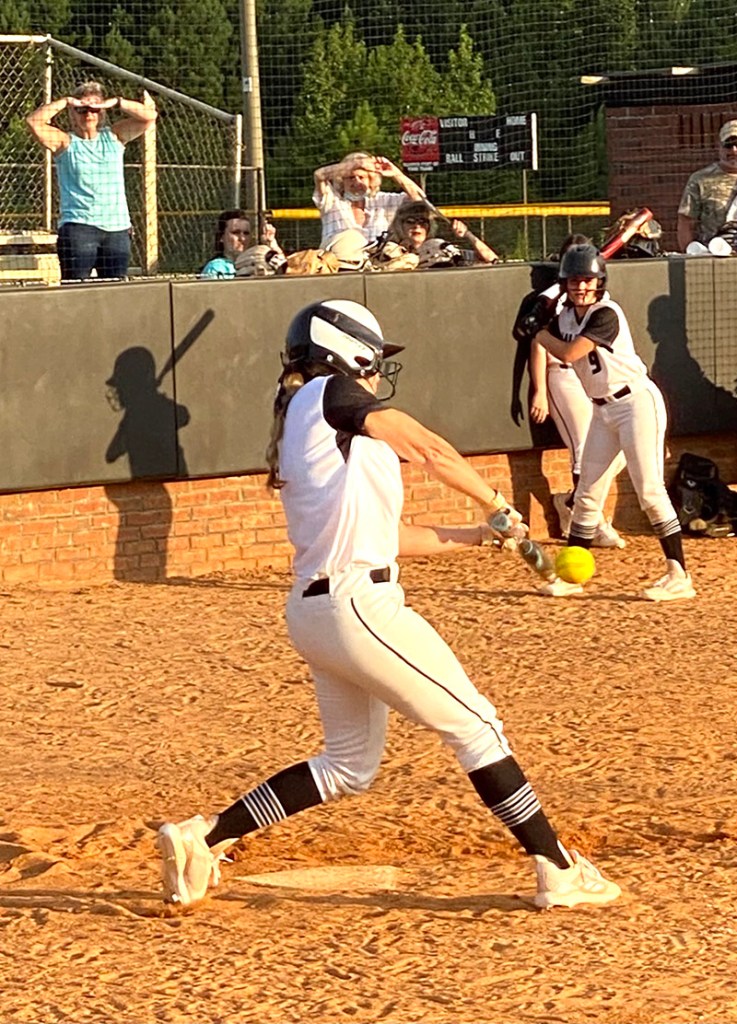 Schley County first baseman Berkley Goodin belted a two-run homer in the bottom of the fourth of Game 1 against Hawkinsville in the Wildcats’ 12-2 victory over the Red Devils. ATR Archive

HAWKINSVILLE, GA – The Schley County Wildcat Softball Team (SCHS) exploded for a total of 20 runs on 23 hits in its two-game sweep of Hawkinsville (HHS) in a doubleheader on Wednesday, September 1 at the Hawkinsville Recreation Center in Hawkinsville, GA. The Wildcats routed the Red Devils 12-2 in Game 1 and followed that up with another dominating performance in Game 2, beating HHS 8-1 to sweep the doubleheader.

In Game 1, Maddie Walker led the SCHS offense by going 3 for 4 at the plate with a double, two singles, two RBIs and a run scored, while Berkley Goodin went 2 for 3 with a two-run home run in the top of the fourth. Other Wildcats who also turned in multi-hit performances in Game 1 included Landry Whaley, Zoe Molina, Destiny LeCroy and Brenna Jacobs. Three other players, Emma Walker, Makena Wurtz and Lily Walker, had one hit in the contest.

Makena Wurtz got the start in the circle for the Wildcats. In four innings of work, Wurtz gave up two runs on three hits and struck out one HHS batter. Mackenzie Pugh came on in relief of Wurtz in the bottom of the fifth and retired the final three Red Devils in order to secure the 12-2 victory for SCHS.

In Game 2, SCHS jumped out to a 3-0 lead in the bottom of the first and never looked back from there. In the bottom of the second, the Wildcats added another run when Destiny LeCroy drove in Emma Walker on an RBI single to centerfield.

In the bottom of the fourth inning, SCHS added two more runs. With the bases loaded and nobody out, LeCroy doubled to left field, scoring Lizzie Barineau to give SCHS a 5-0 lead. Then Molina drove in Liberty Justice on an RBI single.

The Red Devils scored their only run of Game 2 in the top of the fifth, but the Wildcats went right back to work in the bottom half of the inning. With runners on first and third and one out, Lizzie Barineau stole second base and Maddie Walker was able to steal home. Mackenzie Pugh then drew a walk before Liberty Justice drove in Barineau from third on a fielder’s choice, making the final score 8-1 in favor of SCHS.

LeCroy led the Wildcats’ offense by going 3 for 4 at the plate with two RBIs and one run scored and Emma Walker went 2 for 2 and scored two runs. Molina also had a multi-hit game by going 2 for 4, while Barineau, Landry Whaley, Maddie Walker and Liberty Justice each had one hit in Game 2.

Barineau pitched all seven innings for the Wildcats to earn the win. She gave up one earned run on seven hits, walked one batter and struck out three.

With their sweep of HHS in this doubleheader, the Wildcats have now won three straight games and are now 4-4 on the season after starting out the season 1-4.

They will try to extend their winning streak to four games when they travel up to Roberta, GA to take on Crawford County on Wednesday, September 8. First pitch is scheduled for 5:30 p.m.