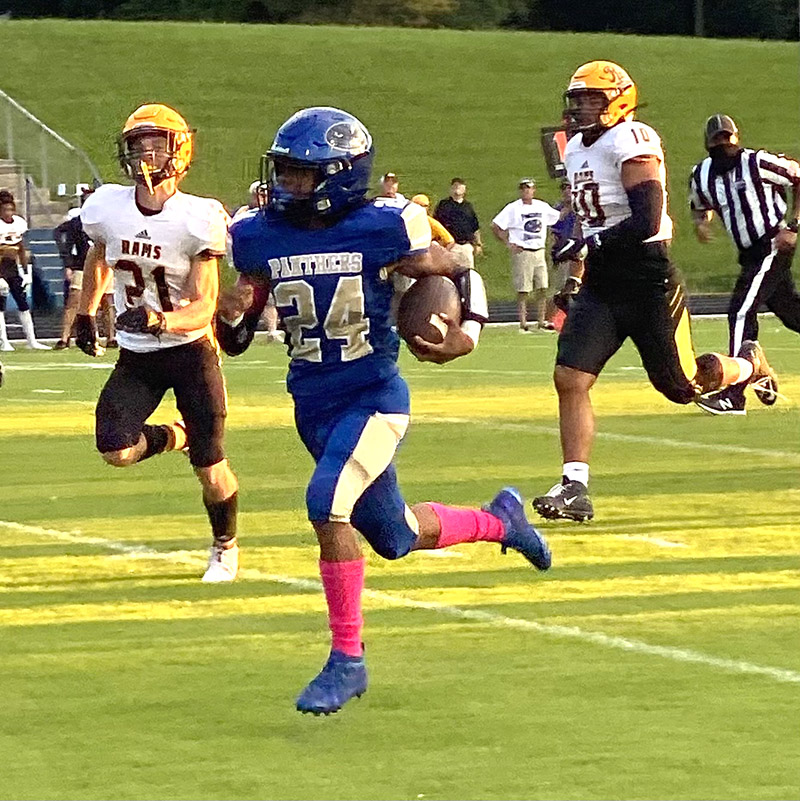 Sumter County running back Jarod Lewis ran the ball for 50 yards down to the Worth County 30-yard line. Photo by Ken Gustafson

AMERICUS – Worth County quarterback Chip Cooper and wide receiver Parker Weaver linked up for three touchdowns to help lead the Rams to a 34-7 win over the Sumter County Panthers on Friday, September 3 at Alton Shell Stadium.

SCHS is now 0-2 on the season, with Region 2-AAA to begin on Thursday, September 16 when the Panthers travel to Macon to take on the 0-3 Chargers of Central-Macon to open region play.
Early in the first quarter, the game was a defensive struggle, with both teams deadlocked at 0-0, but once again, just like a week ago, a special teams mistake by the Panthers in which the ball was snapped over the punter’s head changed the momentum of the game and not in a favorable direction for the Panthers. 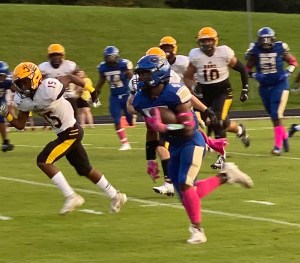 Sumter County wide receiver Anthony Tyson catches a short pass and scampers down to the Worth County 29-yard line in the first half. Later in the second half, Tyson scored the Panthers’ only touchdown when he returned a kickoff 99 yards for the score.
Photo by Ken Gustafson

In addition to the botched snap on the punt in the first quarter, the Panthers were also undone when they were unable to recover an on-side kick by the Rams on the ensuing kickoff after WC had scored a touchdown. These two plays in the first quarter, coupled by the Panthers’ inability to capitalize on offense after making big plays to put themselves in scoring position, helped pave the way for Cooper, Weaver and the rest of the WC team to take advantage and dominate the contest.

On the Panthers’ first possession of the game from the WC 20-yard line, running back Jarod Lewis made a big play when he ran the ball 50 yards down to the Rams’ 30-yard line. However, the drive stalled and SCHS was forced to punt.

The Panthers’ defense came up big on the Rams’ first possession of the game, as they were able to stop WC on fourth down and got the ball back with decent field position. 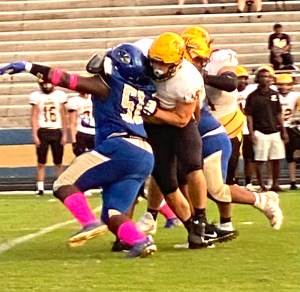 Sumter County defensive lineman Bryan Williams tries to get past his blocker.
Photo by Ken Gustafson

On their next offensive possession, SCHS made another big play when quarterback Cameron Evans threw a short pass to Anthony Tyson, who scampered all the way to the WC 29-yard line. However, once again, the drive bogged down and the Panthers were forced to punt. It was at this point of the game when things went badly for SCHS. The ball was snapped over SCHS punter Mason Herron’s head and recovered by the Panthers at their own 33-yard line. This mistake on special teams proved to be costly, as the Rams would have the ball in SCHS territory. A few plays later, the Rams had the ball first and goal from the SCHS 12 when Cooper found Weaver in the end zone for a 12-yard touchdown. The extra point was good and Sumter County trailed 7-0.

Having just given up a touchdown, the Panthers were hoping to respond on their next offensive possession, but WC had other ideas. The Rams were able to recover the ball on an on-side kick and they took advantage of it by mounting a drive that ended with a rushing touchdown by Tman Toomer. The extra point was good and WC led 14-0. 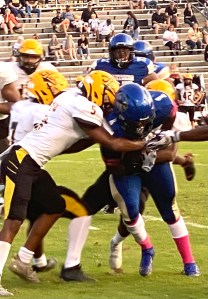 Sumter County wide receiver Kadarrius King makes a reception and fights for yardage against Worth County.
Photo by Ken Gustafson

With a little over two minutes left before halftime, the Rams very nearly got another touchdown when Cooper looked as if he was going to score on a quarterback keeper. Fortunately for SCHS, he lost control of the football just before making it to the end zone and the Panthers recovered it for a touchback. SCHS was able to move the ball close to midfield, but the drive stalled and the Panthers were forced to punt. Fortunately for SCHS, they were able to keep the Rams from scoring any more points before the half and went into halftime trailing 14-0.

With a little over 10 minutes left in the third quarter, the Rams had the ball around the SCHS 49-yard line before Cooper threw a long pass to a wide open Weaver for his second touchdown reception of the night, giving WC a 20-0 lead. 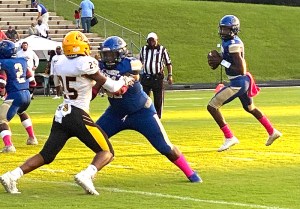 Sumter County quarterback Cameron Evans is back to throw against Worth County.
Photo by Ken Gustafson

However, the Panthers were finally able to put points on the board as Tyson returned the ensuing kickoff 99 yards for an SCHS touchdown. The extra point was good and just like that, the Panthers still had hope, trailing 20-7 with 10:01 to go in the third quarter.

However, as the third quarter was nearing its end, the Rams would snuff out any hopes of a come-from-behind victory by the Panthers. WC was able to move the ball down inside the SCHS 10-yard line. Then Cooper found Weaver for a seven-yard touchdown pass, the third between the two. Then early in the fourth quarter, the Rams tacked on seven more points when running back Hunter Barber scored a rushing touchdown from 16 yards out. The extra point was good and that would cap off WC’s 34-7 win over SCHS. 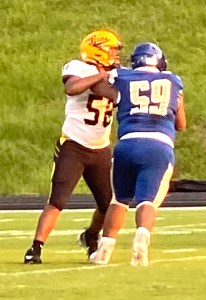 The Panthers (0-2) will try once again to earn their first win of the season when they open GHSA Region 2-AAA play in Macon against the 0-3 Chargers of Central-Macon on Thursday, September 16. Kickoff is scheduled for 7 p.m.