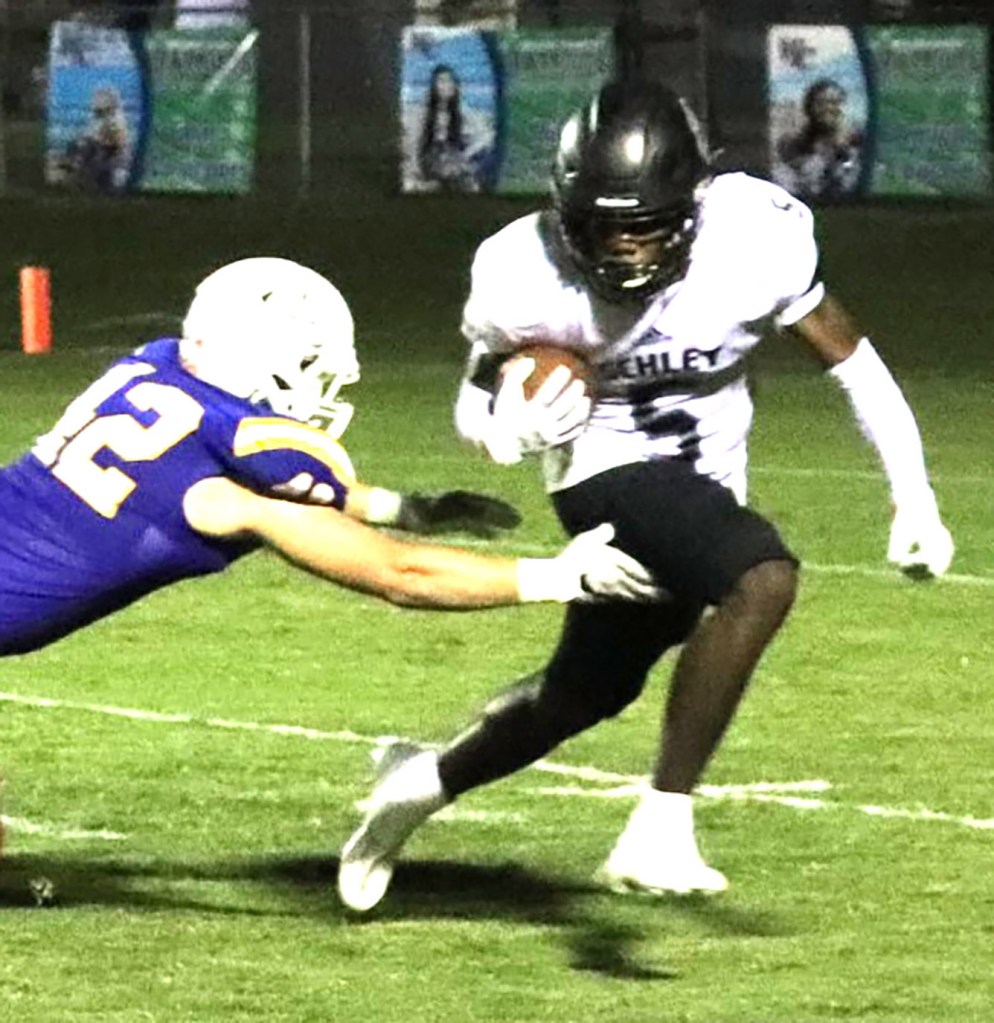 Schley County running back Malachi Banks rushed for 102 yards on 10 carries and scored two rushing touchdowns to help lead the Wildcats to a 35-0 rout of Wilcox County. Photo by Kaia McLennan

ROCHELLE, GA – The Schley County Wildcat Football Team went into Rochelle, GA and totally dominated Wilcox County on both sides of the line of scrimmage. As a result, SCHS was able to drub the Patriots 35-0 on Friday, September 3 at Wilcox County High School.

The Wildcats opened the scoring when quarterback Jay Kanazawa connected with JaLewis Solomon for a 14-yard touchdown pass. The extra point by Javier Lopez was good and SCHS led 7-0 with 9:43 left in the first quarter. 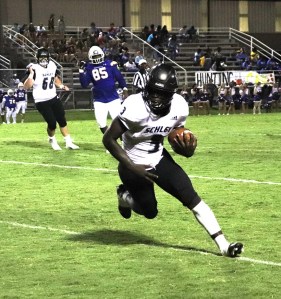 In the waning minute of the first quarter, the Wildcats mounted a drive that ended up at the WC 1-yard line. Then Zayden Walker capped off the drive with a rushing touchdown. Lopez’s extra point was good and the Wildcats led 14-0 with 17 seconds left in the quarter.

Then with a little over seven minutes left in the second quarter, SCHS running back Malachi Banks scored the first of his two touchdowns from four yards out. Lopez’s extra point attempt was good and the Wildcats were up 21-0 at halftime.

Banks would later strike again when he scored a rushing touchdown from 20 yards out. Lopez made his extra point and the Wildcats enjoyed a commanding 28-0 lead with 10:56 to go in the third quarter.
However, SCHS was still not done. With 10:17 to go in the fourth quarter, Zayden Walker scored the second of his two touchdowns on the night on a two-yard run to cap off the dominating performance by the Wildcats. 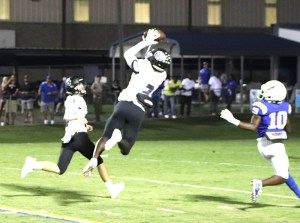 Schley County wide receiver JaLewis Solomon makes a great catch against Wilcox County. Solomon caught five passes for 98 yards and one touchdown and had one interception as a defensive back.
Photo by Kaia McLennan

Kanazawa had a solid night as the signal caller for SCHS. He went 13 for 21 for 159 yards, one touchdown pass and one interception. The Wildcats also had a solid ground game, rushing for a total of 211 yards on 31 carries and producing four rushing touchdowns. Banks scored two of those touchdowns while rushing for 102 yards on 10 carries.

The Wildcats also had a good night catching the football, as JaLewis Solomon led the wide receiving corps with five catches for 98 yards and a touchdown.

SCHS was equally dominant on the defensive side of the ball, as the defense produced three interceptions: one from JaLewis Solomon, one from Clinton Jackson and one from Carson Westbrook.
SCHS is now 2-0 on the season and will try to extend its winning streak when the Wildcats travel up Highway 19 to Butler on Friday, September 10 for their first region contest against Taylor County. Kickoff is scheduled for 7:30 p.m.