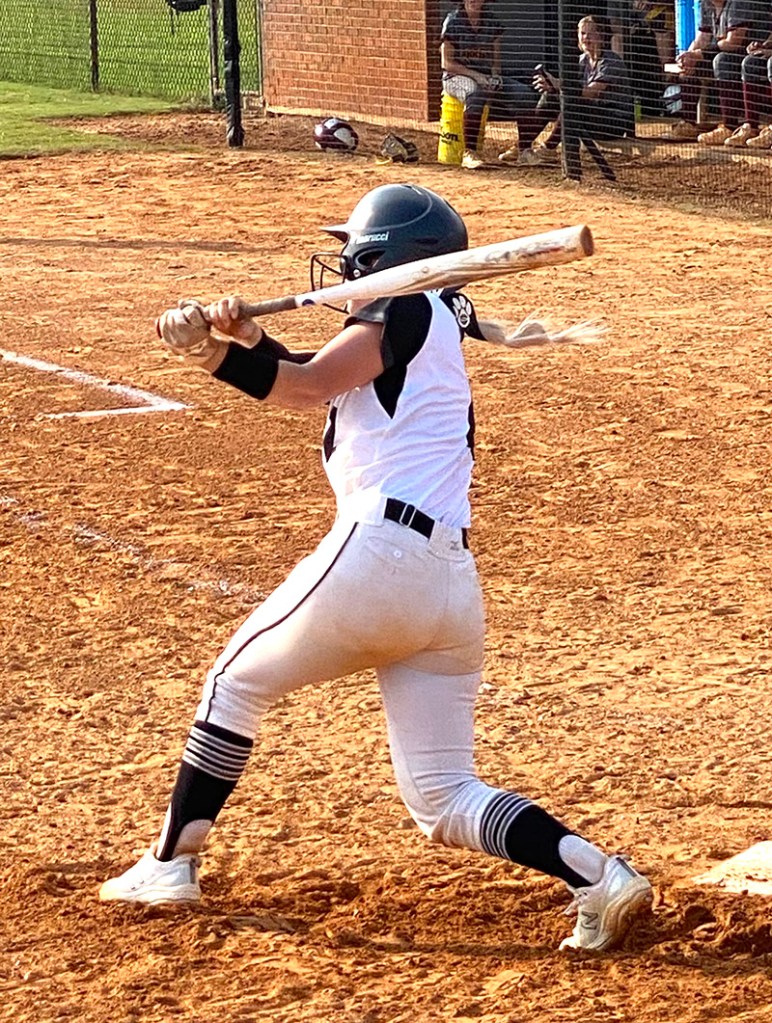 Schley County senior Landry Whaley went 3 for 4 at the plate with a double, two RBIs and a run scored in the Lady Wildcats’ 9-8 loss at Crawford County. ATR Archive

ROBERTA, GA – For the second time this season, the Schley County Lady Wildcat Softball Team (SCHS) went down to defeat as the result of a game-winning RBI single when Crawford County left fielder Aleigha Evans drove in the game-winning run on a walk-off single in the bottom of the seventh inning to defeat the Lady Wildcats 9-8 on Wednesday, September 8 at Crawford County High School (CCHS).

The Lady Wildcats were dealt the same type of blow back on August 23 when they lost to Veterans 4-3 on a walk-off single in extra innings.

Going into the bottom of the seventh, SCHS led 8-7, but CCHS first baseman Mary Kathryn Mason led off the frame with a single and courtesy runner Jaydyn Rogers was able to advance to second on a wild pitch, putting the tying run in scoring position.

Kennadi Rozier then tried to bunt the runner over to third, but was able to reach on an error. That same error allowed Rogers to score, tying the game at 8-8.

After SCHS pitcher Makena Wurtz was able to get Nevaeh Ivey to ground out, Jacie Whiddon singled to left field, putting the winning run at third with one out.

That set the stage for Evans, who drove in Rozier for the game-winning run on an RBI single to left field.

This loss was a difficult one to swallow for the Lady Wildcats. Not only were they three outs away from victory going into the bottom of the seventh, they also at one time had a 7-2 lead over the Lady Eagles going into the bottom of the sixth before CCHS scored five runs on six hits and took advantage of a walk and an error to tie the game at 7-7. The big blow in this frame came off the bat of Cheyenne McDonald, who drove in three runs on an RBI double to tie the game. In the top of the seventh, the Lady Wildcats were able to retake the lead when Landry Whaley drove in Mackenzie Pugh on an RBI double. Unfortunately for SCHS, they were not able to hold the Lady Eagles in the bottom of the seventh.

Both Emma Walker and Berkley Goodin each had a hit and an RBI and Goodin also scored a run.

Wurtz got the start in the circle for the Lady Wildcats. In a little over six innings of work, she gave up four runs on eight hits and struck out two batters. Lizzie Barineau came on in relief of Wurtz and gave up five runs on six hits while walking one.

The Lady Eagles (7-2) jumped out to a 2-0 lead in the bottom of the first when Bailey Carreker drove in two runs on an RBI double, but Wurtz was able to hold CCHS at bay until the top of the fourth when the Lady Wildcats erupted for seven runs on seven hits. They were also able to take advantage of a dropped third strike and a hit batsman. However, SCHS was not able to hold the lead, as the Lady Eagles would respond with five runs of their own in the bottom of the sixth to tie the game at 7-7.

The Lady Wildcats (4-5) will try to rebound from this setback when they host Taylor County later today at 5 p.m.