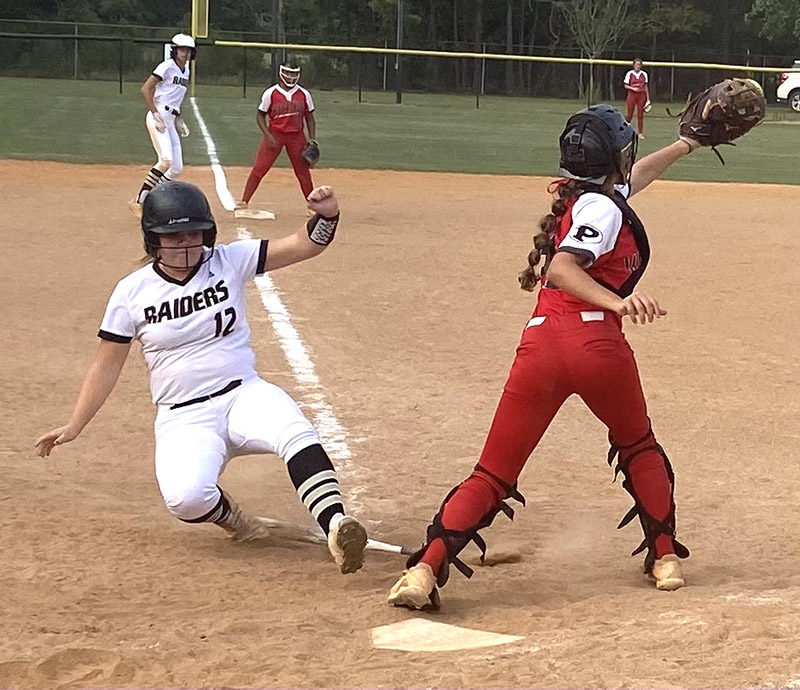 AMERICUS – Up until the bottom of the fifth inning, the Southland Academy Lady Raider Softball Team (SAR) was in a tight battle with the Lady Vikings of First Presbyterian Day School (FPDS) in a GISA/GHSA match up.  However, things took a dramatic turn in the bottom of the fifth. With two outs and a runner on second, the Lady Raiders scored five runs on four hits to secure an 11-3 victory over the Lady Vikings on Monday, September 13 at the Southland Academy Softball Complex.

The big blows in the inning came from the bats of Ila Johnson, Eva Grace Studdard and Morgan Weaver.  Johnson and Weaver each drove in a run on RBI singles and Studdard drove in another run on a double to centerfield.

With the bases loaded and SAR leading 10-3 with two outs, Morgan Weaver scored the final run of the game on a wild pitch. With that, the game concluded, as SAR had run ruled the Lady Vikings 11-3.

“It was another good day. We didn’t have very many clean innings defensively, but we did a very good job of responding to adversity today,” SAR Head Coach Blaze Hargrove said. “They had runners in scoring position and our pitchers and defense did a good job of bailing us out and getting out of some tough jams early. That enabled us to keep our lead and keep our confidence and then we did a really good job at the plate of working good counts and getting the count in our favor. We did a good job of staying on the softball today….driving the ball. I’m super proud of the way they responded after a tough loss Thursday.”

Coach Hargrove was referring to the Lady Raiders’ 13-4 loss at the hands of Southwest Georgia Academy on Thursday, September 9 in Damascus, GA. 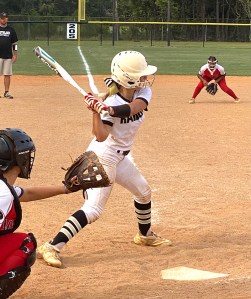 Southland Academy Freshman Catcher Avery Ledger went 3 for 4 at the plate with two RBIs to lead the Lady Raiders to an 11-3 win over FPDS.
Photo by Ken Gustafson

Chelci Woody got the start in the circle for the Lady Raiders. In three innings of work, Woody gave up three runs on nine hits and walked one batter. Maddie Godwin came on in relief of Woody and pitched two scoreless innings, giving up only two hits, walking one and striking out one. 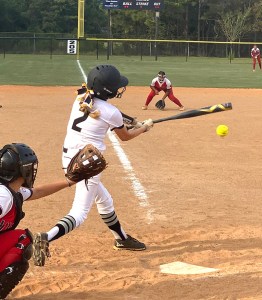 Southland Academy Freshman Ila Johnson went 1 for 3 with an RBI and scored a run in the Lady Raiders 11-3 win over FPDS.
Photo by Ken Gustafson

The Lady Raiders jumped out to a 3-0 lead in the bottom of the first on five hits. With a runner on first and one out, Ledger drove in the first run of the game on an RBI single and Hart followed with a double to left field. T.J. Bowden then drove in Samantha Wojnar on a sacrifice fly and Maddie Godwin followed that with an RBI double to centerfield.

The Lady Vikings countered with a run in the top of the second, but SAR responded with two more runs on three hits in the bottom half of the inning. With Morgan Minick on second base and one out, Ledger hit a blooper into centerfield, allowing Minick to score from second. Landry Hart then belted an RBI double to left field to give the Lady Raiders a 5-1 lead.

FPDS scored two runs on four hits in the top of the third, but the Lady Raiders responded with a run in the bottom of the fourth. With two outs, Morgan Weaver was hit by a pitch and Ledger singled to centerfield. Then Landry Hart reached on an error when her fly ball to left field was misplayed by the FPDS left fielder. That allowed Weaver to score and gave SAR a 6-3 lead.

The Lady Raiders held FPDS scoreless in the top of the fifth, setting the stage for their five-run explosion in the bottom half of the inning. T.J. Bowden led off with a double, but Godwin popped out in foul territory and Gracie Wilson flew out to left field. 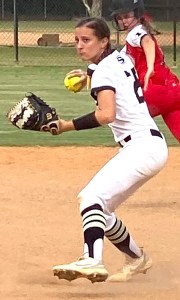 Southland Academy Sophomore first baseman Landry Hart fields the ball and is about to throw home to get the force out at home.
Photo by Ken Gustafson

However, with two outs, Ila Johnson drove in Bowden on an RBI single and Eva Grace Studdard drove in Johnson on an RBI double to centerfield, making the score 8-3 SAR. After Minick was hit by a pitch, Morgan Weaver drove in Studdard on a single to centerfield and Ledger reached on an error that allowed another run to score. With that, the Lady Raiders were one run away from winning the game via run rule.

Southland Academy Freshman Pitcher Chelci Woody got the start in the circle for SAR against First Presbyterian Day School.
Photo by Ken Gustafson

Hart drew a walk to load the bases for Bowden, but Bowden didn’t have to swing the bat, as Weaver was able to score on a wild pitch to end the game.

The Lady Vikings were led offensively by Cammie Frame and Alanna Porter, who each went 2 for 3 at the plate. Frame drove in a run and scored one as well. 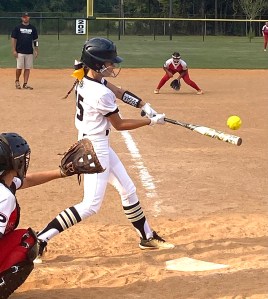 Southland Academy Sophomore Gracie Wilson went 1 for 3 with a single in the Lady Raiders’ win over FPDS.
Photo by Ken Gustafson

Avery Stroud went the entire way in the circle for FPDS. In 4.2 innings of work, Stroud gave up 11 runs on 13 hits, walked one batter and struck out two.

The Lady Raiders will now focus their attention on the Westwood Lady Wildcats, whom they will play on Tuesday, September 14 in Camilla. First pitch is scheduled for 4 p.m.