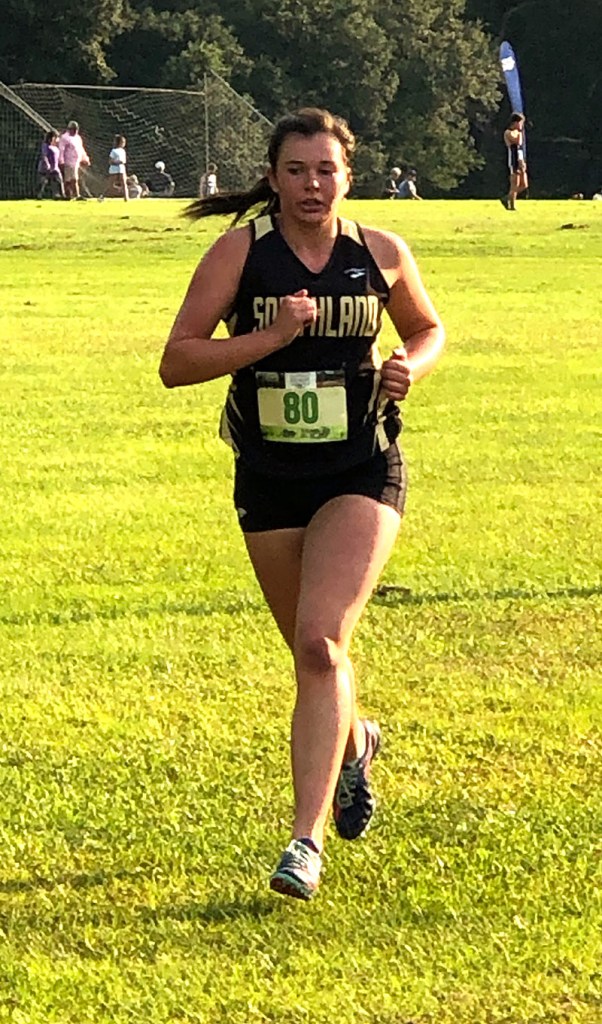 Southland Academy’s Jadie Burrell turned in another top 10 finish for the Lady Raiders’ Cross Country Team. Burrell finished in ninth place with a time of 23:45.6. Photo by Carol Burrell

LEESBURG – Southland Academy senior Jadie Burrell turned in another top 10 performance this past Saturday, September 10 at the Lee County Invitational held at the Kinchafooney Primary School in Leesburg.

Burrell finished in ninth place in the high school girls’ race with a time of 23:45.6. While she placed third on her home course at the Southland Raider Run two weeks ago, Burrell ran almost two minutes faster at the Lee County meet and finished roughly 18 seconds behind eighth place finisher Emily Phillips of Lee County, who ran a time of 23:27.7. Ainsley Toews of Tift County won the girls’ race, finishing in a time of 21:48.5.

The next local runner to cross the finish line was Maria Kilheffer of Furlow Charter (FC). Killheffer finished in 16th place in a time of 24:47.1. As far as Kilheffer is concerned, she believes that she is making her desired progress as the season continues.

“I think I’ve done pretty well to progress,” Killhefer said. “I think I ran a little bit faster this time and I wasn’t as tired.” Killheffer improved her time by almost a minute since she ran a time of 25:44.50 at the Furlow Fast Feet Invitational back on Saturday, August 21. 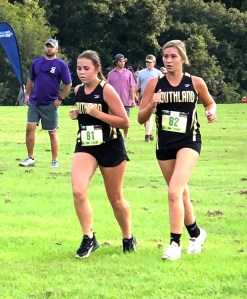 Southland Academy XC runners Ella Arnold (left) and Maddie Godwin (right) compete in the Lee County Invitational. Arnold finished in 57th place out of 130 competitors with a time of 28:54.0 and Godwin finished right behind her in a time of 28:56.2.
Photo by Carol Burrell

The next two local female athletes to cross the finish line were Southland Academy teammates Ella Arnold and Maddie Godwin. Arnold finished 57th out of 130 competitors with a time of 28:54.0 and Godwin finished right behind Arnold in a time of 28:56.2. Arnold’s time at the Lee County meet was two minutes faster than what she ran at the Southland Raider Run on August 28 (30:54.40). 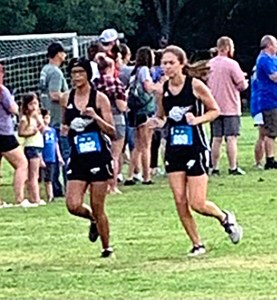 Schley County female athletes Malia Hardin (left) and Kaia McLennan (right) compete in the Lee County Invitational. McLennan was the first Schley County Lady Wildcat to cross the finish line, finishing in a time of 33:42.7. Hardin finished the race in a time of 37:32.4.
Submitted Photo

Kaia McLennan of Schley County was the first Lady Wildcat to cross the finish line at the Lee County meet. McLennan finished right behind FC’s Addis Drinnon in a time of 33:42.7. Other Schley County girls who turned in strong performances included Malia Hardin (37:32.4), Kaylee Taylor (38:33.1), Abby Kirkland (38:34.5) and Kaleigh Johnson (38:40.0).

In boys’ action, Southland’s Noah Sheff was the first of the local runners to cross the finish line. Sheff finished 29th out of 179 competitors in a time of 20:50.2. Eyan Zupko of Worth County won the boys’ race, finishing in a time of 17:36.0. 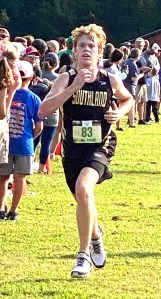 Southland Academy’s Noah Sheff was the first of the local area male athletes to cross the finish line at the Lee County Invitational. Sheff finished 29th out of 179 competitors with a time of 20:50.2.
Photo by Ken Gustafson

Edwin Gonzalez of Furlow Charter was the next local runner to cross. Gonzalez finished four spots behind Sheff and finished in a time of 21:08.4, which was nearly a minute faster than his time of 21:48.97 at last month’s Furlow Fast Feet Invitational. “I feel pretty good about today’s race. I feel like I could have run faster, but that’s another problem,” Gonzalez said. “I try to do everything I can with nutrition, sleep and everything in between…the little stuff that matters. My progression? It’s promising. It’s not, like, stagnating as it would last year so I’m really happy about that. I just hope it can get faster each race.”

Schley County’s first runner to cross, Dustin Howard, finished two spots behind Gonzalez with a time of 21:21.5. “This course was a pretty good bit different. It’s two laps and a lot flatter than most of the courses that I’ve done,” Howard said.

“It’s a little humid today, a little rough. The ground was a little soft, but I can definitely see a lot of improvement in my training, but my time was a little off today and I’m ready to get better.” 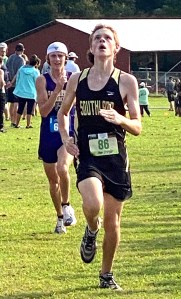 Southland Academy’s Matteson Debaise finished 56th out of 179 male competitors and finished with a new PR (Personal Record) of 22:12.1 at the Lee County Invitational.
Photo by Ken Gustafson

Southland’s Matteson Debaise was the next local male athlete to cross the finish line. Debaise finished in 56th place out of 179 competitors with a time of 22:12.1, which is a new PR (Personal Record) for him. Debaise’s teammate, Shaw Pinnell, turned in a strong performance by finishing the race in a time of 24:24.9. Other area male runners turned in strong performances in the Lee County Invitational, including another athlete who turned in a PR (Personal Record). They are as follows:

As far as the coaches were concerned, they were all extremely pleased with the how their squads performed in the Lee County meet and in the progress they are making over the first few weeks of the season.

“Everybody is getting faster,” Southland Head Coach Buck Kinney said. “We had a couple place again. It was a fast meet. It was a very fast meet, so our kids, they ran well. They all improved their times. We’re going in the right direction. 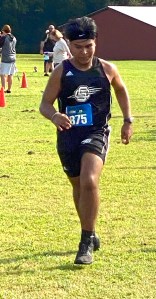 Furlow Charter Head Coach Brittany Skiles is in her first year at the helm of the Falcons and Lady Falcons. According to her, the hard work that her squads have put in over the past couple of weeks manifested itself in this meet.

“I’m proud of them. They listen. They did everything I asked,” Skiles said. “They’ve been working hard the past couple of weeks. Several of them shaved off minutes off their time. They started off, like I want, conservatively and then gradually worked their way up. They paced themselves great. It was a much better performance than two weeks ago.” 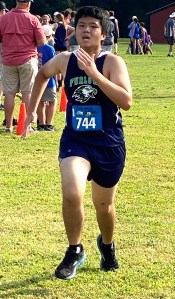 As far as Schley County Girls’ Head Coach Beth Kinney was concerned, she is pleased that her squad is continuing to improve as the season goes on. “They did well. All the girls improved their times by a minute or more,” Kinney said. “I’m proud of their performance and we’re going to keep working to improve our times and to get stronger.” 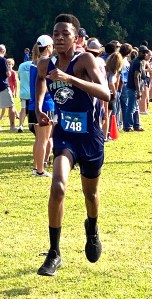 Furlow Charter’s Jordan Brown finished the high school boys’ race in a time of 29:48.0 at the Lee County Invitational.
Photo by Ken Gustafson

Schley County boys’ head coach Scott Burgess was extremely pleased with the fact that almost every SCHS athlete set a new PR at this meet. “I am very happy for our athletes, as we had nearly every runner set a new PR,” Burgess said. “We had some athletes beat their old record by more than two full minutes, which is a great testimony to their hard work and determination.” 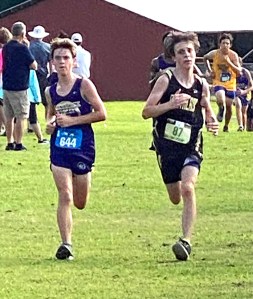 Both the Schley County and Furlow Charter teams, as well as the Sumter County High School squads, will be competing in the Marion County XC Invitational on Saturday, September 18, while the Southland Academy Raiders and Lady Raiders will be at the Deerfield-Windsor Meet in Albany at the Albany State West Campus (formerly known as Darton College). That meet is also this Saturday, September 18.