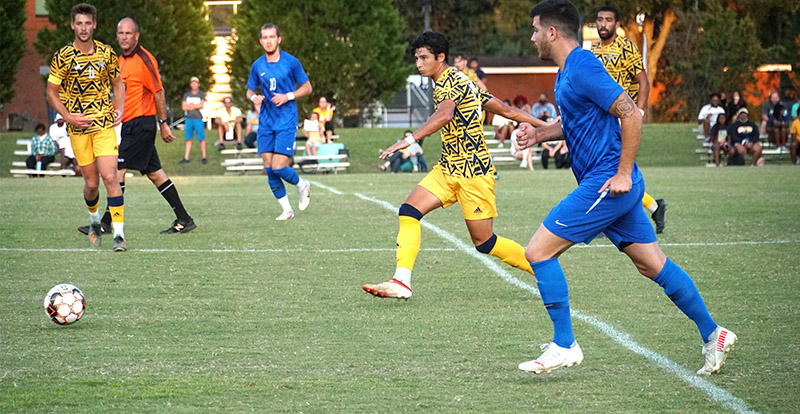 The GSW Men’s Soccer Team (yellow and navy blue) is on the attack against Embry-Riddle. Photo by Christopher Finn

AMERICUS – The Georgia Southwestern State University Men’s Soccer Team (GSW) defeated Embry-Riddle Aeronautical University 3-0 on Saturday evening, September 11 at Hurricane Field. With the victory, the Hurricanes improve their record to 2-1 on the season, while ERAU drops to 1-2.

Freshman Midfielder Nicholas Sciarra opened the scoring in the 23rd minute when he received a pass from Jack Malleret and put the ball in the back of the net, giving the Hurricanes a 1-0 lead.

The scoring grinded to a halt for 50 minutes before junior forward Chris Salamatou scored his first goal of the season in the 79th minute to give the Hurricanes a little more breathing room with just 11 minutes left in the game. Matteo Landais, who assisted on Salamatou’s goal, finished the game off with a goal that was assisted by Malleret.

The Hurricanes will take on Flagler College at Hurricane Field in their Peach Belt Conference opener on Sept. 15 at 7:30 p.m.