The year 1906 brought two institutions to Americus. The state legislature established the Third District Agricultural and Mechanical School, the “Aggie School” that became Georgia Southwestern State University. Americus also became one of thirty-seven cities in Georgia to participate in professional baseball that year. The ill-fated Americus Pallbearers were the first of eight minor league teams to call this city home.

It took time for minor-league baseball to find its footing in Americus. The Georgia State League—in which the Pallbearers played only a few months—was the fourth league in the state’s history. Even the news of a local team caught many in town by surprise. As the Americus Times-Recorder reported in February 1906, “no one seems to know anything about it.” That (and perhaps the name) was a bad omen for the short-lived team and league. The Pallbearers finished dead last behind the Columbus River Snipes, the Valdosta Stars, and the Waycross Machinists. After the Americus and Valdosta teams disbanded and the Columbus team moved to Brunswick in the summer of 1906, the Georgia State League folded.

The Americus Muckalees brought professional baseball back to Americus, first as part of the Empire State League in 1913 and then under the old league name. Other teams included the Valdosta Millionaires, Thomasville Hornets, Cordele Babies, Waycross Blowhards, and the Brunswick Pilots. The Americus roster had Bob Geary, an Ohioan pitcher who went on to play for the Philadelphia Athletics (1918-19) and the Cincinnati Reds (1921), as well as Hugh Hill, an outfielder from Ringgold who previously played for the Cleveland Naps (1903) and the St. Louis Cardinals (1904). The league reorganized in 1915, becoming the Florida-Alabama-Georgia (FLAG) League, adding a team from Dothan, Alabama, and moving the Americus team to Gainesville, Florida. Americus formed a new team, but it played in unaffiliated, semi-pro leagues until joining the Georgia-Florida League in 1935.

It was during this twenty-year gap that Shoeless Joe Jackson briefly came to play in Americus. In 1923, the Americus team (no nickname) played in the independent South Georgia League alongside the Bainbridge and Dawson teams, the Albany Nut Crackers, the Arlington Bell Ringers, and Blakely Hardwood. Jackson, banned from playing after the 1919 Chicago Black Sox scandal, came to Americus midseason and the decision to sign him caused a stir. Major league baseball commissioner Kennesaw Landis threatened, “Any baseball player who willingly plays with or against any player expelled from organized baseball for conduct detrimental to baseball may find himself barred from organized baseball.” Americus manager Tom Bell successfully argued that Jackson’s expulsion did not apply to independent leagues. The South Georgia League voted 3-2 to let Jackson play.

The Americus team did well with Jackson and other players who he recruited. During the first half of the season, Americus won only 8 of their first 21 games; after Jackson arrived, Americus lost only 5 of the next 21 games. In August, Americus beat the Albany Nutcrackers game seven of the “Little World’s Series.” Americus fans expected Jackson to manage the pool hall at the Windsor Hotel and play for the team the next season, but he joined the Waycross team and moved on from his brief stint in Americus.

Under the Georgia-Florida League, Americus played its most consistent minor league ball. The name still changed often: Americus Cardinals (1937-38), the Americus Pioneers (1939-1942), Americus Phillies (1946-1950), Americus Rebels (1951), and the Americus-Cordele Orioles (1954). In the years, nearly thirty Americus players went to, or came from, the major leagues—often during the draft years of World War II. There was Less Moss, a catcher from Tulsa, Oklahoma, who first played in professional baseball in Americus in 1942. He moved to the major leagues in 1946 and played for the St. Louis Browns, the Boston Red Sox, the Baltimore Orioles, and the Chicago White Sox. He later managed the Chicago White Sox (1968) and the Detroit Tigers (1979). Shortstop Jack Cusick first played in the minor league ball for the Phillies. He later played one season for the Chicago Cubs (1951) and the Boston Braves (1952).

There were several ballparks during these decades. The Muckalees played on the west side of town between Hampton and Dudley streets. When the city extended Forsyth Street west of Cotton Ave., the new road cut right through the ballfield and the bleachers. The Americus Cardinals played at the “Americus Play Grounds” just south of Barlow and Hill Streets. It was here that “Shoeless” Joe Jackson played. The extension of Barlow Street to Dodson Street cut right through that historic ballpark, too.

Ball grounds reflected the divides of segregation. In 1930, the city established the “Americus Negro Playground” with a ballpark on the south side of Town Creek and the east side of North Lee Street. The wooden Thomas L. Bell Stadium, also known as the “Green Stadium,” came to Americus the same decade as part of an ambitious complex that also included a community center and recreation building. Funded through the Works Progress Administration, workers finished the wooden stadium in 1938. As with the previous stadium on Barlow Street, it was an architecturally segregated space with a covered white section and an uncovered Black section (that no longer exists).

It was fitting that the Americus Cardinals played its last game at the Barlow Street ballfield and the first game in the new stadium against its “traditional enemies,” the Albany Travelers. “Americus will take a half-holiday for the occasion,” the Times-Recorder reported, “and thousands will swarm into the city from throughout the Americus and Albany districts. The Travelers will come here Monday, seeking revenge for the double defeat handed them in the Fourth of July games here and in Albany.” In a repeat of the “little World’s Series” fifteen years earlier, both teams were evenly matched. Albany won the last game at the Barlow Street field; Americus won the first game in the new stadium. 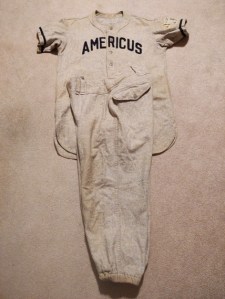 The Bell Stadium is the best physical reminder of professional baseball in Americus. The Columbus Redstixx, the Macon Braves, and the Albany Polecats, including future Hall of Famer Vladimir Guerrero, played a few exhibition games there in the 1990s, and the Americus Arrows (2002) were the last minor league team to use the stadium. By that time the ballpark was better remembered for decades as the home field of Americus High School. The high school team won the state championship in 1953-55, 1961, 1964-66, and 69-70. The county recreation department and Georgia Southwestern used the stadium for years as well.

It is a magnificent space with a powerful sense of place. “We would all fight over who got the first base dugout because it was a real dugout,” Chris Barr remembers from middle-school rec baseball in the green stadium. “You felt like a pro.” There are only a handful of similar stadiums left standing.

Preserving the Bell Stadium should not be controversial. Yet there is reason to worry about the future of this historic structure now that the new Sumter County High School is open. Someday soon—at most a few years—the high school baseball team will not want to travel all the way from the new high school to the old field. It is not hard to imagine the stadium falling into disrepair.

The historic stadium raises obvious questions that apply to the rest of the campus as well. Is there a plan? Or will the stadium—and the other athletic fields and the school—go the way of so many other public spaces across this city and across this county? It does not have to be that way. But that is what will happen unless there is a comprehensive plan for redeveloping the land that includes the preservation of the stadium. 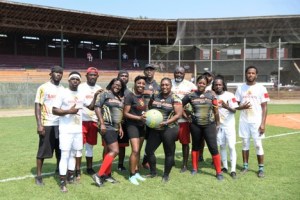 If there is reason to worry, there is also reason for hope. In July 2021, Sumter County High School Coach Lee Wright III organized a sixteen-team kickball tournament that culminated with a championship game in the wooden stadium. The event was well organized and well attended. There were concession stands, including C.P.’s Turkey Legs, Chef K’s Sweets, and Konia Ice. The Smokin’ Aces went 4-0 and defeated Central Baptist Church in the championship game. It was a hot day even under the shade of the roof. But this was exactly the sort of community event that this stadium needs.

There will probably never be another minor league team in Americus and there will probably never be another wooden stadium built here. Yet the city has historical ties to professional baseball and by good fortune still has its 1938 wooden stadium. This place matters. It would be well worth investing the time, money, creativity, and political capital needed to plan for this structure’s preservation.

Let us plan to make sure the stadium sees its centennial in 2038.