The harvest is rich! 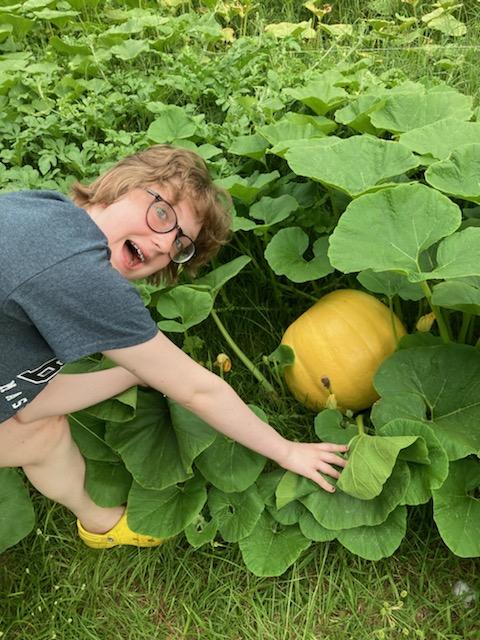 Emily Kauffman celebrates the progress of the pumpkins 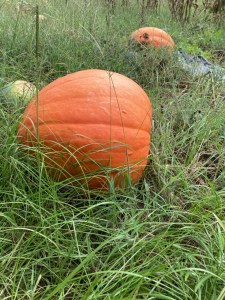 Emily’s pumpkins as they grow

Paula and Johnny Heath started with just a simple request and little seeds. Emily Kauffman, their granddaughter and a ninth grader at Furlow Charter School asked Johnny to plant pumpkins for her in their garden. Paula reports, Johnny was pleased to do so and told Emily, “We will plant some just because you want them!” So, in late May to early June, the Heaths went about planning the season’s garden. With just a limited number of seeds, Emily’s request was met. Paula reports the vines grew and grew and multiplied over and again. In July, when the weather got particularly wet, they grew concerned the bottoms of the now large pumpkins would begin to rot, so the Heaths made an effort to get them off the wet ground. In doing so, the stem clipped on two of the larger pumpkins. Just as a fisherman loves to weigh his haul, so did these Heaths. They took the two pumpkins to the bathroom scale, and they weighed in at 30 pounds and 59 pounds.

Paula reports pumpkins are much like corn, in that when they are gutted for their produce, the ultimate amount can appear to be small. Paula reports pumpkins bear a lot of water, so the harvest is precious. Out of one pumpkin they procured seeds for roasting. Another one offered two quarts of produce along with another harvest of seeds. Although they had two winners off the vine, the biggest one was yet to come. Paula reports Johnny is a “farmer at heart, he loves to watch things grow, to plant, and to pick. He doesn’t like anything to go to waste.” Having planted the seeds and watched the pumpkin grow for months, it was now time to pick it. The last pumpkin was so large, it could not be weighed on the bathroom scale, so Johnny put it on the back of his truck and took it down to Farmer’s Feed and Seed to show it Frank Joiner and get a weight on it. The pumpkin weighed in at an impressive75 pounds. 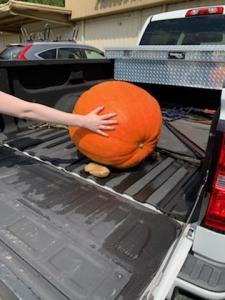 Paula then got busy canning the pumpkin and she and her daughter-in-law harvested 11 quarts of the gourd. In addition to the 11 quarts, Paula worked up some magic in her kitchen and put two pumpkin pies and several muffins on the table. Paula believes the original seeds came from Farmer’s Feed and Seed, and they tended the vines as they tend to the rest of their garden. There was no special fertilizer or additional favor shown to the vines. Emily has started a new tradition, the Heaths plan to put pumpkins in their garden going forward. However, Paula reports planting season may be a little later next time as her family wants to harvest them in time for “jack-o-lantern season.” Keep your ears out for tales of monster pumpkins when you are visiting Farmer’s Feed and Seed, farmers tend to spread the good news frequently and quickly. Good call Miss Emily, so glad you made the request!