In spite of maximum effort, Raiders fall to Westfield at home 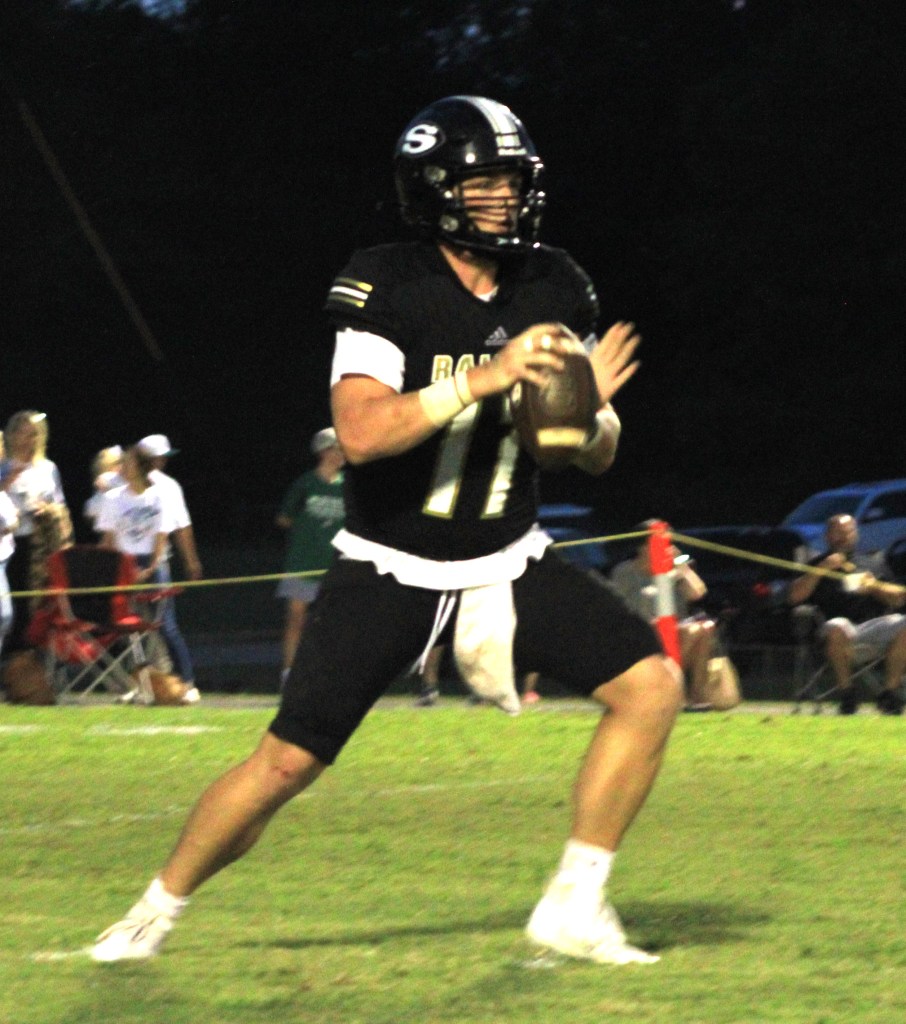 Southland Academy Quarterback Chase Ledger threw for two touchdowns and rushed for three more to lead the Raiders to a 35-7 victory over Edmund Burke Academy. Photo by Kayla Hudgins

AMERICUS – The Southland Academy Raider Football Team (SAR) laid it all on the line against Westfield (WS) in front of the home crowd at Harvey Simpson Stadium on Friday night, September 17. The Raider defense was able to force two turnovers, which gave the offense chances to capitalize. However, in spite of this effort, SAR was hurt by its own turnovers, penalties and the inability to capitalize on a scoring opportunity in the fourth quarter. As a result, the Raiders fell to the Hornets 28-14.

With the loss, SAR falls to 1-3 on the season, while WS improves to 2-1. but according to SAR Head Coach Rod Murray, his squad only has one choice in front of it: to keep grinding and getting better day by day.

“We’ve played good teams so far and we’ve got a lot more good teams on our schedule,” Murray said. “We’ve improved in some areas and our kids fought and competed for four quarters tonight. I’m very proud of the effort that the players gave, the effort that the coaching staff gave to get them ready and we’ve just got to keep getting better day by day. That’s the choice we have and that’s what we are going to do.” 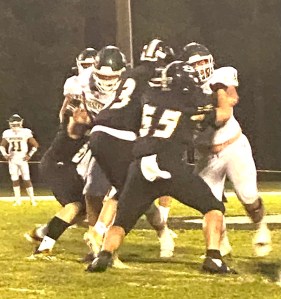 Southland Academy offensive linemen Luke Exley (53) and Kolden Kinney (55) block for the Raiders during one of their offensive possessions in the first half.
Photo by Ken Gustafson

Throughout the first quarter, there was no scoring, as it was a defensive stalemate between both teams. Late in the first quarter, however, the Raiders turned the ball over on a fumble, but the SAR defense returned the favor on the Hornets’ subsequent possession when SAR defensive back Landon Griffin stripped the ball from WS quarterback Hunter Kirkley and recovered the fumble.

Unfortunately for SAR, the Raider offense wasn’t able to take advantage of the turnover and with a little less than 12 minutes to play before halftime, the Hornets had the ball at their own 33-yard line when Kirkley threw a pass towards the sideline to Ryan Powers. Powers was able to elude his defender and scampered all the way for a WS touchdown. The extra point by Jackson Slade was good and the Raiders trailed 7-0 with 11:34 to go before halftime. 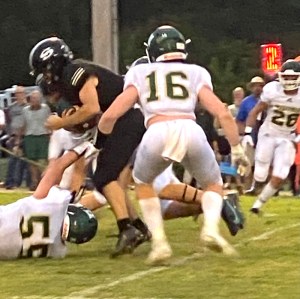 SAR was once again stymied on its next offensive possession and the Hornets were able to take advantage. They were able to move the ball all the way down to the SAR four-yard line before Kirkley scored on a quarterback keeper. The extra point by Slade was good and the Raiders found themselves trailing 14-0.

However, on the ensuing kickoff, SAR running back Hudson Collins made a long kickoff return to give the Raiders good field position. SAR was then able to move the ball down to the WS 25-yard line. Then on fourth down and four from the WS 25, SAR quarterback Chase Ledger completed a pass to Perry Usher that was good enough for the first down.

A couple of plays later, running back David Dickens ran the ball down inside the five-yard line before Collins scored from four yards out. The extra point by Caleb law was good and the Raiders were back in the game trailing 14-7 at the half. 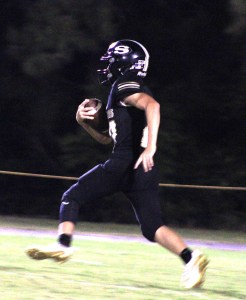 Southland Academy running back Fisher Britt carries the ball for the Raiders against Westfield.
Photo by Ken Gustafson

However, things took a wrong turn for the Raiders early in the third quarter, as the Hornets were able to force and recover a fumble near the SAR 25-yard line. Then on the Hornets’ first play from scrimmage, running back Porter Faulk ran the ball down to the SAR six. Then on third and goal from the six, Kirkley found Ryan Powers in the back of the end zone for another WS touchdown. The extra point by Slade was good and the Raiders found themselves trailing 21-7 with 9:20 to go in the third quarter.

On the Raiders’ next possession, they were in the process of moving the football before Ledger was sacked for a 10-yard loss by WS defensive tackle Cole Miller. This effectively ended the drive and after the Raiders punted, they were penalized for unsportsmanlike conduct, which moved the Hornets inside the SAR 30-yard line. Soon thereafter, WS took advantage when Kirkley scored from 25 yards out on a quarterback keeper. The extra point was good and SAR trailed 28-7 with a little less than five minutes left in the third quarter.

In spite of the third quarter difficulties the Raiders were facing, they still continued to fight and did not quit. On their next possession, they were able to move the ball into WS territory when Ledger found Collins on a 15-yard passing play to the Hornets’ 40. A couple of plays later, Collins was able to run the ball down to the WS 21-yard line for first down yardage. Then on third down and five from the WS 16, Collins fought his way for first down yardage down to the Hornets’ 10-yard line. However, two plays later, intentional grounding was called against Ledger as he was trying to elude two WS defenders. Ledger threw the ball away to keep from getting sacked for a huge loss, but the officials deemed there was no receiver in the area. This forced the Raiders into a third and 30 situation from the WS 30.

However, on the third down play from the 30, the Raiders caught a break when pass interference was called against the Hornets, which moved the ball down to the WS 15. On third and 15, Ledger threw a short pass to Trey Sellers at the five-yard line, giving the Raiders one more shot at the end zone on fourth and goal from the five. Then on fourth down, Ledger rolled to his left. Seeing nothing but green grass in front of him, he ran the ball into the end zone for an SAR touchdown. The extra point by Caleb Law was good and the Raiders were back within 14 points, trailing 28-14 with 8:06 left in the game. 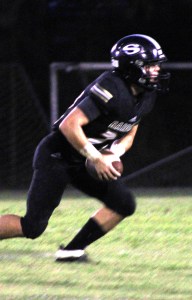 Southland Academy running back/defensive back Landon Griffin carries the ball for the Raiders. Griffin forced a turnover in the first quarter when he stripped the ball from the Westfield quarterback and recovered the fumble.
Photo by Kayla Hudgins

Then on the Hornets’ next possession, the Raiders’ hopes for a comeback victory rose with the dawn when the Hornets’ fumbled on their own 29-yard line and the Raiders recovered the fumble, giving themselves a golden opportunity to score.

However, Ledger was sacked on the next two plays and it forced a fourth and goal situation from the WS 15. On fourth down, Ledger’s pass into the end zone fell incomplete and the Hornets took over on downs. As a result of the fumble recovery, the Raiders had the ball inside the WS 10-yard line, but two back-to-back sacks by the Hornets on Ledger effectively snuffed out SAR’s hopes of scoring a touchdown on the drive and mounting a come-from-behind victory.

With 2:57 to go in the game, the Raiders got the ball back and tried to mount a last-minute drive for a quick score, but on second and 10 near midfield, Ledger’s pass was intercepted by Powers. The Hornets were then able to run out the clock and left Americus with a 28-14 victory.

The Raiders will try to rebound from this setback and halt their two-game losing streak when they travel to Waynesboro, GA to take on Edmund Burke Academy on Friday, September 24. Kickoff is scheduled for 7:30 p.m.