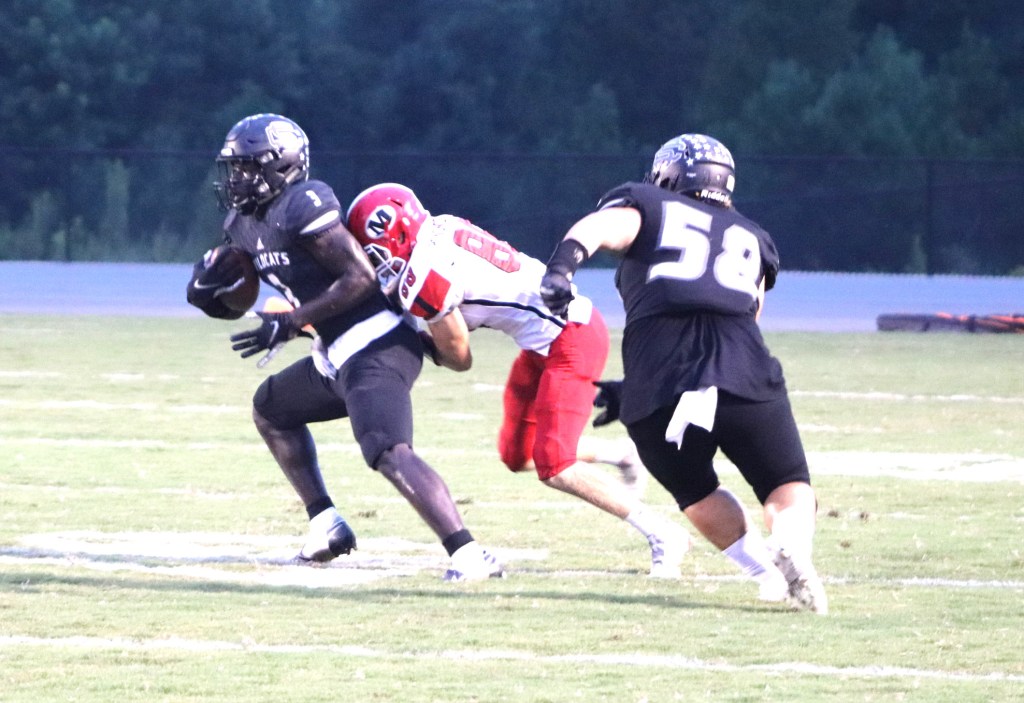 Schley County freshman running back/defensive back Zayden Walker (#3) scored two rushing touchdowns, scored another after a fumble recovery and blocked a punt to help lead the Wildcats to a 48-7 win over Marion County. Wade Cox (#58) is seen here blocking for Walker. Photo by Kaia McLennan

ELLAVILLE – For the past few years, the Marion County Eagles have been a thorn in the flesh for Schley County (SCHS). On two occasions, the Eagles have knocked the Wildcats out of the GHSA Class A-Public State Playoffs and they have played a significant factor in SCHS being unable to win a region championship in football. However, on Friday night, September 17, the Wildcats finally got the upper hand and they did it in dominating fashion. The Wildcats made plays on special teams and defense by blocking a punt and creating two turnovers on route to a 48-7 drubbing of the Eagles at Wildcat Stadium at Schley County High School.

“I think our kids are playing hard. They had a little adversity in the beginning last night and responded well,” SCHS Head Coach Darren Alford said. “I was interested to see how we would do when a tough situation arrived and the kids were up for the challenge. The defense still hasn’t been scored on this year. Their efforts were tremendous. Offensively, we have to keep getting better each week. I feel that we can be very explosive at times on the offensive side of the football. The coaches on both sides of the football are working very hard to keep us getting better each week.” 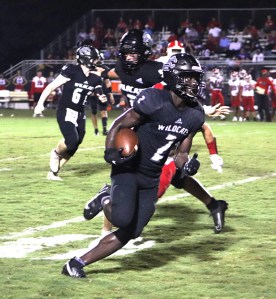 SCHS freshman running back/defensive back Zayden Walker made his presence felt on both sides of the ball. He blocked a punt, recovered a fumble and ran the ball back 70 yards for a touchdown and scored two more rushing touchdowns, one from 25 yards out and the other from a yard out.

The Wildcats defense also forced another turnover when defensive back Michael Minor had an interception and both Sidney Blackwell and Luke Forehand wreaked havoc on the MC offense. Blackwell tallied nine tackles, while Forehand had eight on the night.

The Eagles scored their only touchdown of the game with 2:27 to go in the first quarter when they forced a fumble, recovered the ball and ran it back 18 yards for the score. However, MC’s early success would be short-lived, as the Wildcats took over the game from there.

On the ensuing kickoff, SCHS kick returner JaLewis Solomon ran the ball back 84 yards for a touchdown. Zayden Walker then scored on the two-point conversion attempt to give the Wildcats an 8-7 lead.

Then with 10:21 to go in the second quarter, Walker scored the first of his three touchdowns from six yards out. The extra point by Javier Lopez was good and SCHS enjoyed a 15-7 lead. About six minute later, SCHS running back Malachi Banks scored a touchdown from six yards out and quarterback Jay Kanazawa would shortly thereafter throw a 35-yard touchdown pass to Solomon to give the Wildcats a 29-7 halftime lead.

Walker would later score the second of his three touchdowns when he recovered a fumble and ran the ball back 70 yards to pay dirt. He then capped off his dominating performance with 3:26 left in the game by scoring a rushing touchdown from 25 yards out, making the final score 48-7 SCHS. 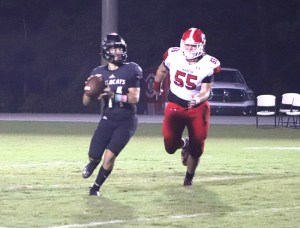 Kanazawa had a strong game throwing the football for the Wildcats. He completed 11 of 19 passes for 179 yards and two touchdowns. On the ground, Malachi Banks led the SCHS rushing attack with 86 yards on 11 carries and one touchdown.

Zayden Walker, who scored a touchdown on a 70-yard scoop and score, rushed for 47 yards on eight carries and had two rushing touchdowns.

The Wildcats (4-0) will try to keep their record unblemished when they travel up to Greenville, GA on Friday, September 24 to take on the Greenville Patriots, who are also undefeated on the season at 3-0. Kickoff is scheduled for 7:30 p.m.