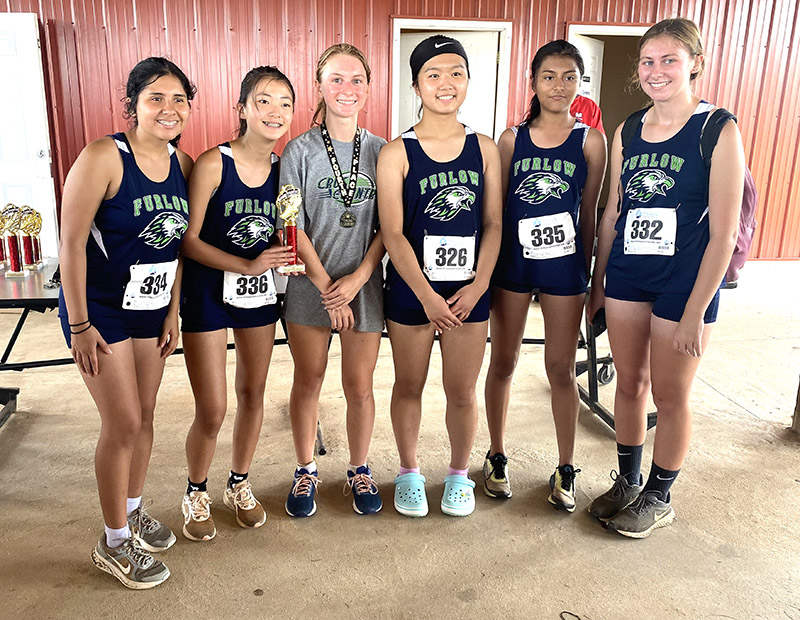 BUENA VISTA, GA – The Furlow Charter Varsity Girls Cross Country Team (FC) turned in its best performance so far this season by finishing as the meet runners-up at the Marion County Invitational on Saturday, September 18 at Marion County High School.

“We had a good week of training. This is by far their best meet,” FC Head Coach Brittany Skiles said. “They kind of came in probably a little tired, but they ended up having their best performance today. I was proud of each individual. They all gave 100 percent from our #1 guy to our #8 guy. I was very proud. On this hilly course, they ran phenomenal.” 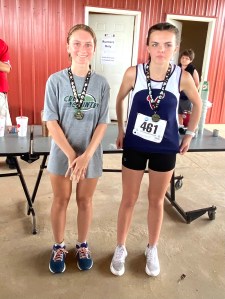 The Lady Falcons finished as the meet runners-up with 56 points, 27 points behind meet champions Brookstone, who won the team championship with 27 points. In the sport of XC (Cross Country), the goal of each team is to score the fewest points possible. FC finished slightly ahead of St. Anne Pacelli Catholic, followed by fourth place finishers Crawford County and fifth place finishers Schley County.

FC sophomore Maria Kilheffer turned in a tremendous performance in this meet, finishing in fourth place with a time of 22:52.36. Kilheffer’’s time in this meet was almost two minutes faster than her time at last week’s Lee County Invitational (24:47.10). What makes Kilheffer’s accomplishment even more impressive was that the MC course was a much more hillier course than the one at the Lee County meet.
“The last race (Lee County), I feel like, was easier because it was two laps and there weren’t as much hills. This one, there’s a lot of hills,” Kilheffer said. “I think I am making the progress I want to make because last year, when I ran here, I had to walk a lot and I was very tired. I pushed through the hills.” 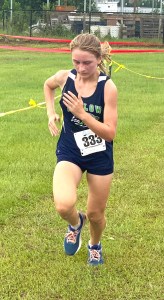 Maria Kilheffer of Furlow Charter pushes through the 3.1-mile course to a fourth place finish at the Marion County Invitational.
Photo by Ken Gustafson

Syruis Zhang of FC was the next local runner to cross. Zhang finished in 22nd place with a time of 29:06.58. Her teammate, Jaclyn Chen, finished three spots behind Zhang with a time of 30:05.95.

The first Schley County female athlete to cross the finish line was Kaia McLennan, who finished with a time of 32:04.45. For McLennan, as it was for all of the runners who competed in the Lee County Invitational the week before, the course at Marion County High School was much more difficult and challenging. “This course was a lot more difficult than the last one,” McLennan said. “There were a lot more hills and it was pretty tough, but I took about a minute and a half off my time from the last course, so I am happy with that. I’m happy with how I did.” 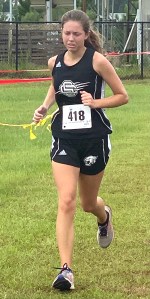 Schley County’s Kaia McLennan was the first Schley County athlete to cross the finish line in the varsity girls’ race at the Marion County Invitational.
Photo by Ken Gustafson

In boys’ action, both Furlow Charter and Schley County turned in strong finishes in the team standings. The Falcons finished in fifth place with 134 points and the Wildcats finished in sixth with 164 points. Sumter County High School finished the meet in eighth place with 184 points, while Brookstone won the boys’ team championship with just 20 points.

Furlow Charter’s Edwin Gonzalez finished in seventh place in the varsity boys’ race with a time of 19:40.78 at the Marion County Invitational.
Photo by Ken Gustafson

Individually, Schley County’s Dustin Howard posted a top 10 performance by finishing in fifth place with a time of 19:24.24. For most runners, a course with more hills would pose more difficulties than a course that is mostly flat, but not for Howard. “This race seemed a lot easier even though there were more hills. The last one (Lee County) was flat,” Howard said. “Today wasn’t as humid as it was at the last race and it felt a lot better.” Howard finished nearly two minutes faster on the hilly Marion course than he did on the flatter Lee County course the week before.

Howard finished a second behind fourth place finisher Christian Resendiz of Warner Robins (19:23.45) and just three seconds behind third place finisher Ty Smith of Brookstone (19:21.26). Smith’s teammate, Joe Hilsman, won the race in a time of 18:27.35 and fellow Brookstone teammate Tommy Marstin was the meet runner up with a time of 19:08.86, ensuring a sweep of the top three spots for the Cougars. 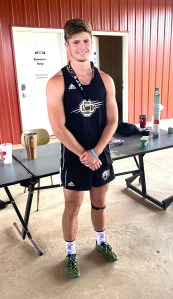 Schley County’s Dustin Howard earned a fifth place finish with a time of 19:24.24 in the varsity boys’ race at the Marion County Invitational.
Photo by Ken Gustafson

Furlow Charter’s Edwin Gonzalez turned in a top 10 finish as well. Gonzalez finished two spots behind Howard in a time of 19:40.78. Gonzalez finished 28 seconds faster at the Marion meet than he did at Lee County and he did it with a slightly-injured knee, but that didn’t stop him from finishing in seventh place on a more difficult course and he is pleased with the progress he is making as the season continues. “My knee is a little messed up, but I did do better overall since last week,” Gonzalez said. “I do believe I’m getting better, even with the knee problem that I’m having right now.” Gonzalez also commented about the mental factor that plays a role in competing in a race like this. “I try to think positive. Coach says to always be positive. Don’t have negative thoughts. Always get your head before the race. I really take that to heart and hopefully, by the end of the season, I’m much better off. Today was a good day,” Gonzalez said. 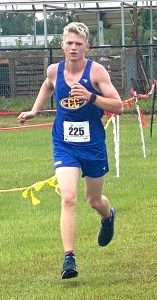 Sumter County’s Grifin Toms is the first Panther to cross the finish line in the varsity boys’ race at the Marion County Invitational. Toms finished the race in a time of 21:08.45.
Photo by Ken Gustafson

There are still several more weeks left in the XC season, and according to Schley County Head Girls Coach Beth Kinney, positive progress was made at Marion County, but more work is yet to be done before the region and state meets. 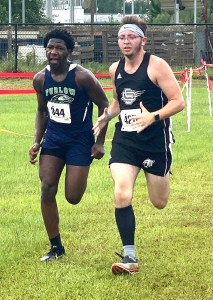 Furlow Charter’s Jaylen Deriso (left) and Schley County’s Nick Allen (right) battle it out to the finish line in the varsity boys’ race of the Marion County Invitational. Deriso barely edged out Allen, finishing in a time of 25:12.24, while Allen crossed the line in a time of 25:12.63.
Photo by Ken Gustafson

As far as the Schley County boys were concerned, Head Coach Scott Burgess was pleased overall with how his Wildcats performed at Marion County.  “We had several PRs (Personal Records). The kids were saying this was the toughest course they’ve seen this season, as far as elevation goes,” Burgess said. “They had to run more hills than they’ve seen, so that was good for them to see that and get ready because I know that at state, there is a very tough course with a lot of elevations. This was a good preview maybe for what some elevation may look like at some courses in the future. It was a good day. I’m proud for all the runners.”