Southland Academy Senior Jadie Burrell finished the girls’ race at the Deerfield-Windsor Meet in 18th place out of 112 competitors with a time of 22:52.21. Photo by Ken Gustafson

ALBANY – While they didn’t finish high in the team standings, as far as individual performances were concerned, both the Southland Academy boys and girls cross country teams (SAR) still posted strong showings at the Deerfield-Windsor Meet held on Saturday, September 18 at the Albany State West Campus.

In boys’ action, SAR sophomore Noah Sheff continued his strong showing this season by finishing 61st out of 155 competitors in a time of 20:31.26. Sheff’s time was about 18 seconds faster than his time of 20:50.20 that he posted at the Lee County Invitational the week before. Sheff’s teammate, Matteson Debaise, also turned in a solid performance, finishing in 79th place out of 155 competitors in a time of 21:49.66. Debasie’s time was also slightly faster than his time of 22:12.10 at the Lee County meet. SAR’s Ryan Peck finished two spots behind Debasie with a time of 21:55.81. SAR runners Matthew Peck and Lee Graft also turned in strong showings. Peck finished in a time of 24:07.78 and Graft finished the boys’ race in a time of 24:25.05. 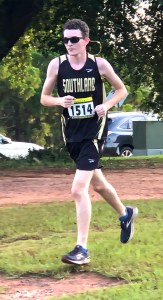 Southland Academy Senior Mathew Peck finished in a time of 24:07.78 in the boys’ race at the Deerfield-Windsor Meet.
Photo by Ken Gustafson

Lady Falcons finish as meet runners up at Marion…