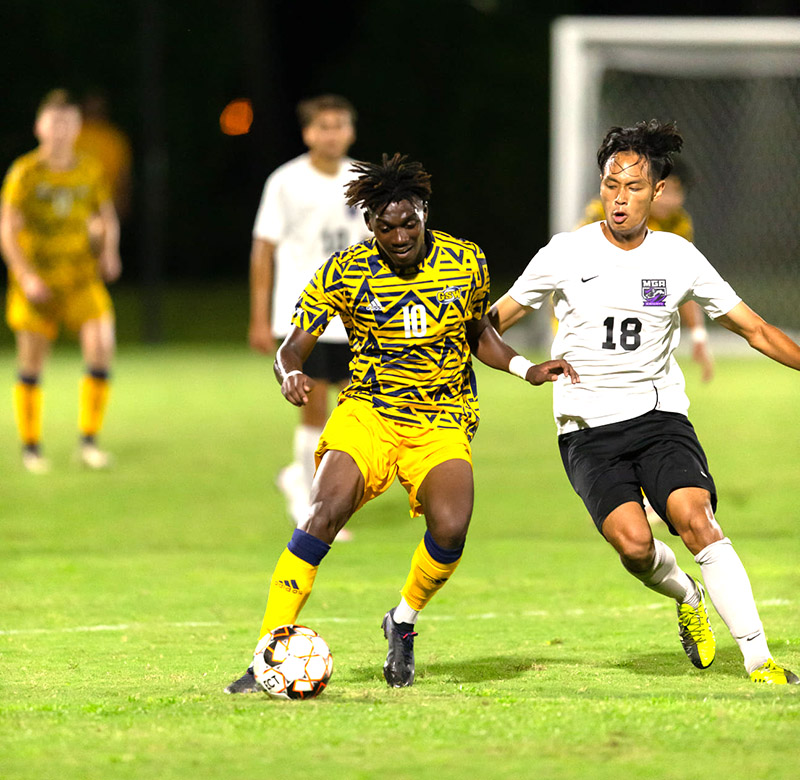 GSW junior midfielder Chris Salamatou (10) converted a penalty kick in the 23rd minute to tie the Hurricanes’ match with Clayton State at 1-1. After 90 minutes of regulation and two overtime periods, the match ended in a 1-1- draw. Photo by Christopher Finn

AMERICUS – The Georgia Southwestern State University Men’s Soccer Team (GSW) battled Clayton State University in an extremely physical match through two overtime periods, but had to settle for a 1-1 draw with the Lakers on Wednesday, September 22 at Hurricane Field.

Both teams scored their goals in the first half. The Lakers drew first blood in the 13th minute when Gio Rios was fouled just outside the 18-yard box. Rios then took the free kick and the ball sailed past GSW goalkeeper Mauricio Uribe and into the net to give the Lakers a 1-0 lead.

However, the Hurricanes were able to get the equalizer in the 23rd minute when GSW was awarded a penalty kick. Chris Salamatou sent the PK to the right of the CCU keeper to tie the score at 1-1.

The defenses of both teams locked in and for the rest of the match, neither side was able to find the back of the net during regulation and overtime. Both Uribe and the GSW defense stood strong and kept the Lakers at bay, with Uribe coming up with five saves during the match.

This match was an extremely physical affair between the two Peach Belt Conference sides, so much so that a total of 12 yellow cards were handed out during the match.

The Hurricanes (3-2-1) will travel up to Dahlonega, GA on Saturday, September 25 to take on the Nighthawks of the University of North Georgia in another PBC contest. Kickoff is scheduled for 6 p.m.