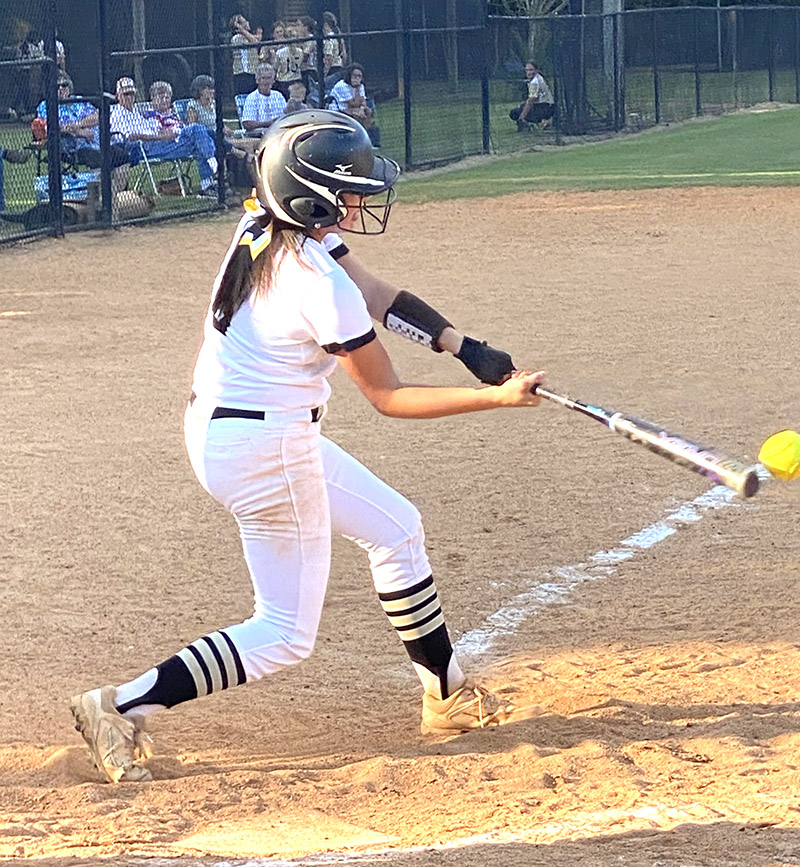 Southland Academy third baseman Jadie Burrell gets the bat on the ball against Terrell Academy. Burrell went 2 for 4 at the plate with an RBI and a run scored in the Lady Raiders 11-3 win over TA. Photo by Ken Gustafson

AMERICUS – The Southland Academy Lady Raider Softball Team (SAR) set the tone early in their game against Terrell Academy (TA) by scoring four runs on five hits in the bottom of the first inning. That early offensive explosion would carry over for the rest of the game, as the Lady Raiders would go on to defeat TA 11-3 on Monday, September 27 at the Southland Academy Softball Complex. 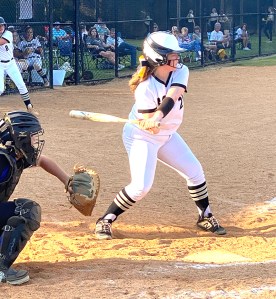 Southland Academy Senior Kayla Hudgins drove in an RBI in the bottom of the fourth inning when she grounded into a fielder’s choice.
Photo by Ken Gustafson

Junior pitcher Maddie Godwin got the start in the circle for SAR and gave up four runs on four hits, walked four and struck out three over four innings of work. Freshman Ila Johnson came on in relief of Godwin and pitched two scoreless innings with one strikeout.

The Lady Raiders wasted no time in the first inning, as Minick singled to lead off the frame and then stole second. With one out, Ledger drove home Minick on an RBI single to left field and SAR had a 1-0 lead. Landry Hart drew a walk off TA starting pitcher Jenna DeBary and T.J. Bowden followed with a single to load the bases for Godwin. Godwin promptly belted a two-run single to left field and Jadie Burrell would later drive in SAR’s fourth run of the game on an RBI single to give the Lady Raiders an early 4-0 advantage. 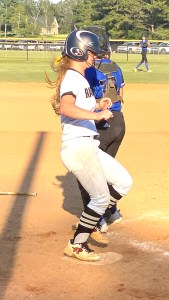 Southland Academy junior Lauren Duke scores the next to last run of the game in the Lady Raiders’ win over Terrell Academy on a two-run sacrifice fly by Morgan Minick.
Photo by Ken Gustafson

In the top of the fourth, TA scored another run to get to within two runs at 5-3, but the Lady Raiders countered with three more runs on two hits in the bottom of the fourth and took advantage of two walks by TA pitching. SAR would later add one run in the fifth on an RBI single by Minick and then two more runs in the sixth when Minick drove them in on a sacrifice fly to right field. At that point, the game was run ruled and the Lady Raiders ended up winning 11-3. 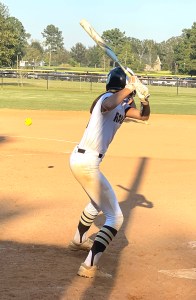 Southland Academy Senior Centerfielder Morgan Minick went 3 for 4 at the plate with three RBIs and two runs scored to lead the Lady Raiders to an 11-3 victory over Terrell Academy.
Photo by Ken Gustafson

SAR (9-7 overall, 3-3 region) will now focus its attention on an important GISA Region 3-AAA contest at home against Tiftarea Academy on Tuesday, September 28.

In the last meeting between these two teams in Chula on Thursday, September 2, the Lady Panthers defeated SAR 10-3. First pitch for Tuesday’s game is scheduled for 4:30 p.m.