Our mayor of 16 years addresses the Kiwanis Club 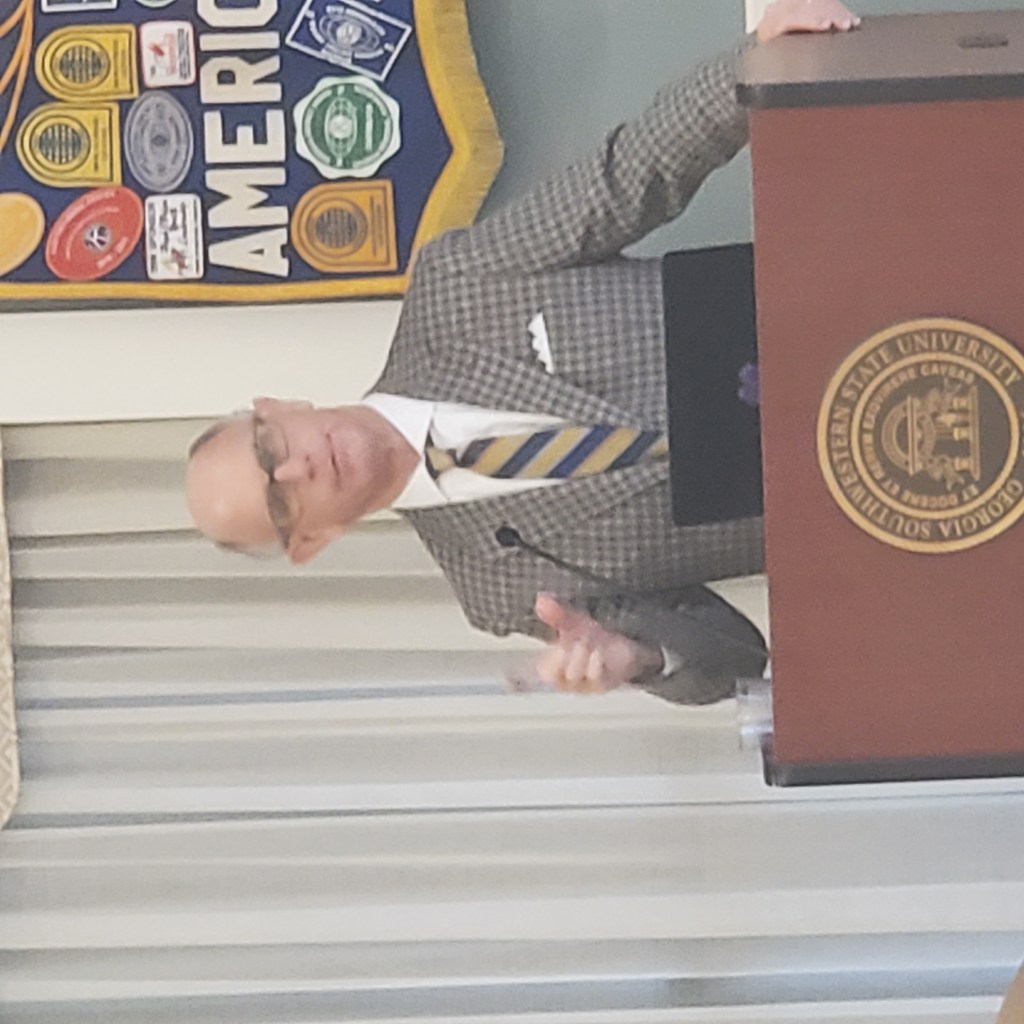 The Americus Chapter of the Kiwanis Club has some fine examples of Americus seated among them. On Friday, September 24, 2021, the face of Americus was invited to address them. John Shealy introduced our mayor. Barry Blount is a lifelong resident of Americus and attended both Americus High School and Georgia Southwestern. He is currently serving as senior vice president at Citizen’s Bank of Americus. In 2006, Barry was elected mayor and has served us as such for 16 years. In John’s research he found Barry is not the longest serving mayor but has in fact been the longest consecutively serving mayor. As John also works at Citizen’s Bank, he has a good view into Barry’s office. John is confident when he remarks of Barry, “He always has the city top on his mind.”

Mayor Blount then took the podium to give a “State of the City” address to Kiwanians. Barry has had a front row seat to see Americus through the past 16 years. He is quick to give credit to the city council for successes we have seen throughout the year. Barry then summed up some of those successes. He also is wise enough to know where we have weaknesses. He told of those as well. Some of the recent achievements include keeping the millage rate the same for another year. Despite COVID-19’s effect on the city, sales taxes continued to help fund the operational needs of the city. One of the helpful contributions to the budget was an internet sales tax. Despite the funding which comes from internet sales, Barry is adamant about buying local. “I really want to encourage you to please shop local, and really support our local merchants because they supply local jobs.”

Our T-SPLOST revenues, which fund items related to transportation, such as paving roads and sidewalks has increased over 18%. Business license revenues have also seen an increase. Surprisingly, building permit fees which indicate growth, are up 54%. Barry then listed off some of the new businesses coming to town to include car washes and fast-food openings as well as B&D Foods, which will be moving into the old Glover Foods building in town. Despite COVID-19 restrictions the hotel/motel tax has brought in an additional 19%. Barry recognizes city employees have done a fantastic job in making and keeping budgets so the city can continue to grow.

The most recent ordinance to pass regards noise and fireworks. He, along with council encourage people to celebrate Halloween on Saturday, 10.30 instead of Sunday, 10.31. Barry tells of our lack of city trolley and how citizens are passionate about seeing it come back. He is happy to report a “brand spanking new trolley” will be arriving the middle of October. New LED landscaping lighting will be going in downtown to replace the white lights that used to encircle the crepe myrtles. In April of this year, the city purchased the old Wells Fargo building downtown. This property will house our customer service building and will also add parking options. Barry is hopeful the building will be functional by November of this year. Eastview Cemetery is receiving much attention and the mayor is pleased with the improvements taking place. While progress has been showing its face, our city, just like others, is seeing slower than usual improvements because COVID-19 has limited workers and supplies. Barry remarked on the sidewalks being laid on Martin Luther King, Jr. Blvd. In addition to a good supply of new bike lanes being developed, the mayor is hopeful Americus will become a more “walker and bicycle friendly community.” Another project in the works is a gateway entrance into the historical district. The project is being done in conjunction with the Sumter Historic Trust. Councilmen Charles Christmas and Kelvin Pless have worked together closely to see this project come to fruition. Also being created in partnership with another community supporter, the Junior Service League, will be a monument recognizing public safety workers who have lost their lives in service. The city has put much energy into designing the appropriate aesthetic of the monument.

As far as public works is concerned, there projects are many. Barry points out the city is 189 years old and the work to ensure our infrastructure remains reliable is ongoing. Wells, filtration systems, storm water projects and scanning of all the sewer lines which has indicated rainwater is seeping into the line were mentioned. The diagnostic use of cameras in the sewers is important. To clean sewage is expensive and cleaning rainwater as sewage is costing the city, so the erosions are being addressed. As an example, Barry mentioned rain can increase the water output by four times its norm. Treating the water is costly, the city can ill-afford to treat rainwater as if it is sewer water. Public Safety will be receiving a new radio system allowing them to enjoy the band strength reserved for first responders and will not be hijacked by things such as personal blue tooth speakers. Police vehicles are being bought regularly every year. A new fire truck is also coming.

Economic Development has enjoyed some successes. The mayor recognized the Sumter County Payroll Development (PDA) Executive Director, Rusty Warner as well as PDA member John Shealy as part of the success. Several announcements of new industry have already been announced this year, and they are expecting more openings soon. With Americus Fresh and B&D Foods alone, 300 new jobs have been created.

Mayor Blount then made the club aware of some challenges. The current unemployment rate in the county is 4.6%. Georgia’s unemployment rate is 3.7%. Barry reports in his history of tracking unemployment rates, 4.6% is “one of the lowest rates we’ve ever had.” He reports seeing many help wanted signs and points out there are jobs available. Barry reports a potential weakness. With creating 300 new jobs, and the potential for more, we have to have the workforce to fill them. Having a strong and willing workforce is imperative to attract new industry. Another threat is our population has decreased by a little more than 9%. While that is similar to what a lot of other counties are suffering, Sumter County was on the lower end of population loss. With such loss, once again, recruiting industry becomes an issue. Another threat to the community is gun violence and drive by shootings. Barry then reiterated, “This isn’t a law enforcement problem, law enforcement is doing their job. Nine times out of 10 they identify the perpetrator. This is a community problem. It’s going to take the community all working together to solve this problem….we got to find a way to stop young people from picking up guns.” Retaining public safety employees is also considered a priority and to be competitive we must increase salaries. Barry then remarked why it is so important the city retain their employees. The Americus Fire Department has received a top-level rating of 1. This indicates not only great service but also provides incentives for businesses to choose Americus due to insurance cost being lowered. Americus is part of a very small percentage who have achieved this goal. For the Americus Police Department, they have received CALEA certification. This is federal level acknowledgement of the highest standard. This too, draws new industry.

In closing the mayor pointed our potential. Support of our two higher education institutions is imperative. New high scale apartments are being built downtown. Developments on Jackson Street are exciting. Our signature events are crowd pleasers and should continue to grow. Barry expressed his pleasure over the fact “wine and chocolate makes women want to shop.” There is also a possibility for transportation expansion on the Sumter County side of the river.

Barry remarked on the privilege it was to serve as our mayor. “I can’t think of any higher honor.” He is looking forward to supporting the new leadership of the city. Barry is not only our face, but he is also our heart, and it becomes evident. He catches his breath. He remarks on General. McCarther’s last visit to West Point. He is quoted as saying “An old soldier never dies; he just fades away.” Barry likened that to his emotions. “I guess you can say that about old mayors, we just kind of fade away.”