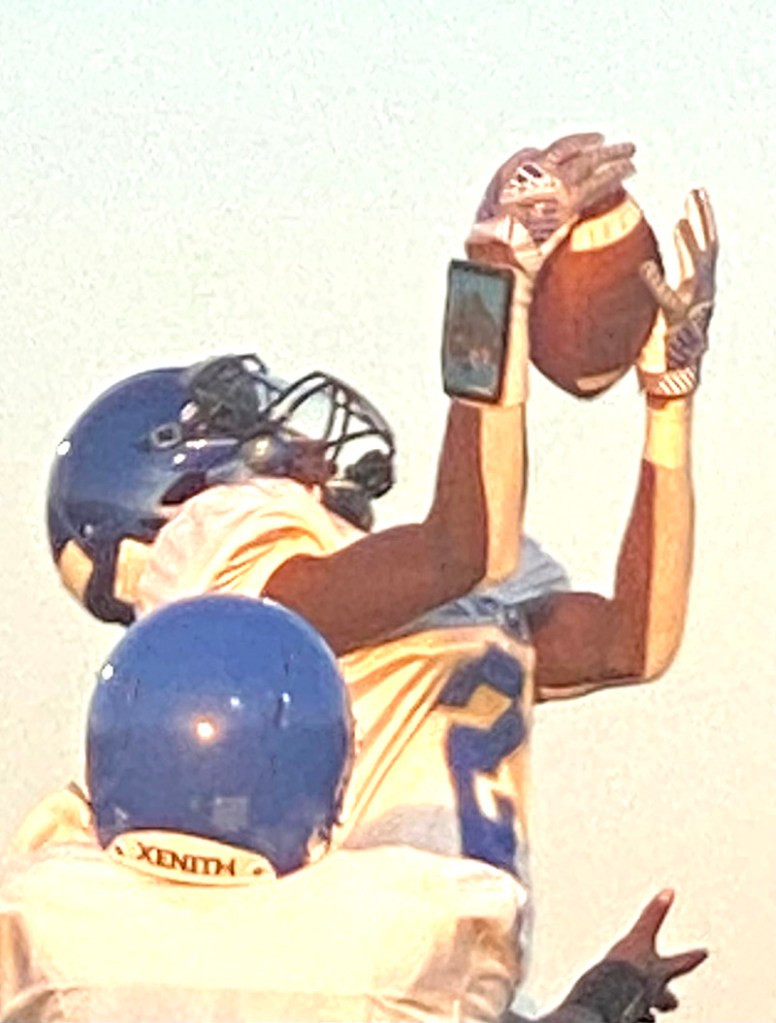 LEESBURG – For those who enjoy watching football games that go down to the wire and are decided in the final seconds, the middle school football game between the Sumter County MS Panthers and the Lee County East MS Trojans was that type of game. The Panthers had a 14-6 lead going into the final three minutes of regulation, but LCE running back Canton Williams ran the ball down to the SCMS 4-yard line. Then with four seconds remaining, the Trojans were able to score the touchdown and converted the two-point conversion to end the game in a 14-14 draw on Wednesday, September 29 at Lee County High School.

“We showed a lot of effort and a lot of poise,” SCMS Head Coach Michael Batts said. “We haven’t played in five weeks so it took us a little while to get our feet up under us. It was hot out here today. On this turf, it was 105-110 degrees. I’m proud of my kids. It’s probably one of the hardest Sumter teams I’ve coached. I mean, just a lot of heart. A couple of calls didn’t go our way. We had our chances. It’s tough to end in a tie, but we’ll take it at Lee County.”

The first half was a scoreless stalemate between both teams. Each team had chances to score, but each team’s defense forced several turnovers. 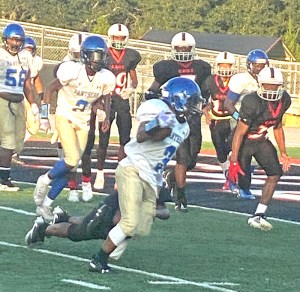 However, in the second half, the Panthers were able to get on the scoreboard first when running back Quayshawn Tatum scored a rushing touchdown. Quarterback Aaron Kearse then completed a pass to Austin Davis, who fought his way into the end zone to complete the two-point conversion, giving the Panthers an 8-0 lead.

However, the Trojans responded with a touchdown and though they couldn’t complete the two-point conversion, they were back in the game trailing 8-6. 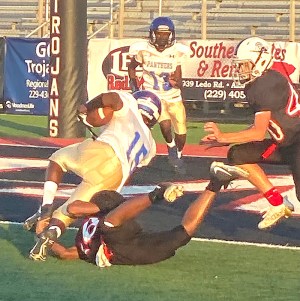 Later on in the second half, the Panthers responded when Amari Hubbard scored a touchdown on a long run from scrimmage. SCMS was able to complete the two-point conversion and pushed its lead back up to eight points at 14-6. 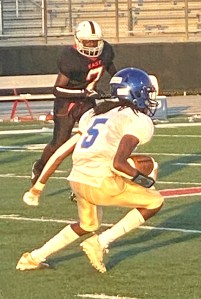 SCMS wide receiver Amari Hubbard is seen here catching a pass and fighting for yardage. Hubbard scored a long rushing touchdown from scrimmage to give the Panthers a 14-6 lead over Lee County East.
Photo by Ken Gustafson

However, in the closing minutes of the game, the Trojans were able to mount a scoring drive when running back Canton Williams broke free and ran the ball down to the SCMS 4-yard line. A couple of plays later with four seconds remaining, the Trojans scored a touchdown and completed the two-point conversion to tie the game. Since it was decided between both coaches that there would be no overtime, the Panthers had to settle for a 14-14 tie with LCE.

Though it wasn’t a high-scoring game, the Panthers excelled on the defensive side of the ball.  Both Hubbard and Omari Woodard each had an interception in the contest. 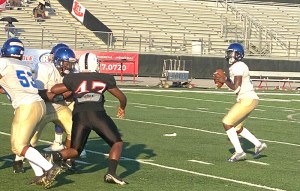 SCMS quarterback Aaron Kearse is back to throw against Lee County East.
Photo by Ken Gustafson

SCMS (1-0-1) will travel back to Lee County High School on Saturday, October 2 to take on Lee County West Middle School. Kickoff is scheduled for 4 p.m.