History, hauntings, and ghosts at the Windsor Hotel

By: Evan A. Kutzler

I drove into Americus on Tuesday, February 23, 2016, for a job interview at Georgia Southwestern State University. After checking in at the front desk of the Windsor Hotel, I took my bags to room 322, went for a run in the historic district, and prepared for happy hour drinks with history faculty at Floyd’s and dinner at the Station. I brought a dark-gray suit for that night and a light-gray suit for the campus interview the following day. The travel was easy compared to a final-round interview in California the year before. There was no jet lag to add to the whirlwind of names, meetings, and questions. Ghosts were not on my mind. 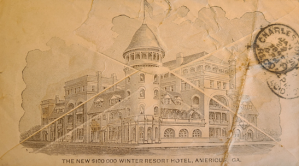 The Windsor Hotel is a historic landmark that sets Americus apart from cities of similar size and population. Designed by Swedish-American architect Gottfried Leonard Norrman, the hotel’s grand opening took place on June 16, 1892, with a ball on the fifth floor and guests in nearly every room. It has many layers of significance: architecture, famous visitors, rehabilitation after years of vacancy, and the people who have worked behind the scenes for 129 years. From its monumental atrium to its original service stairwell, the Windsor Hotel—like the city itself—has many stories. 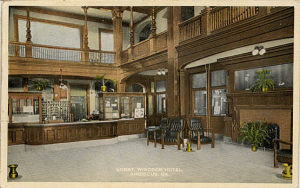 The Windsor does not need ghosts to be historic. And yet, from casual visitors to fulltime ghost hunters, the place attracts paranormal stories—at least in recent decades. Part of the appeal may be the short-lived nature of hotel stays. In Stephen King’s novel The Shining (1977), a maintenance man explains to Jack Torrance that the sheer number of possibilities for coincidences make hotels haunted places. “Every big hotel has got a ghost,” he tells Jack, because “people come and go. Sometimes one of ’em will pop off in his room, heart attack or stroke or something like that.” Checking in and out of a hotel parallels, in miniature, the transience of life. Hotels are in-between spaces and this parallel the in-betweenness of ghost stories: in-between life and death, in-between one world and another world, in-between truth and fiction. This makes hotels prime venues for superstition.

Tragic events are bound to happen in a popular hotel over the course of a century. Joshua Spellman, host of the paranormal podcast Crimes and Witch-Demeanors, discovered an accident two-years after the Windsor’s grand opening. Cincinnati businessman Richard Rust attempted to take the elevator from the lobby floor to his room above. Instead he fell down the elevator shaft. An identical accident occurred in 1896 to a Mr. A. A. Martin. Both men survived but problems with the elevator continued for fifteen years. “When the millennium dawns,” the Americus Times-Recorder wryly predicted on Thanksgiving in 1899, “we may (perhaps) be thankful that the elevator at the Windsor Hotel has actually been repaired.”

In the first decade of the twentieth century, two local white men ended their lives in the hotel. In 1908, Alonzo John Walters, a bank cashier in Ellaville suspected of stealing from the bank, took his own life in the lavatory. The Times-Recorder noted the similarity between his death and that of J. Eugene Moore, a businessman from Albany, two years earlier in his third-floor room. There was much speculation but no clear reason why Moore ended his life at that time and in that place.

Sensationalized newspaper accounts should be read with caution. Editors profited from grisly stories. They exploited tragedy. They detailed lurid crimes, especially when circumstances reinforced notions of white supremacy. In December 1916, an all-white jury convicted Lucius Frazier, the Windsor’s head waiter, of killing Lillie Lewis on Jackson Street. Lewis was a laundress and perhaps also a Windsor employee. Frazier maintained his innocence and claimed self-defense. He spent the last six years of his life laboring on the chain gang and living at the Sumter County Stockade on Prince Street. He is buried in an unmarked grave in Eastview Cemetery behind the cinder block shed.  In 1925, a man attacked Lucius Worlds, a fireman for the Windsor Hotel, with a butcher knife. The newspaper did not specify where in Americus the fatal assault took place.

None of these real events turned into popular Windsor ghost stories. One well-publicized story, included on GPB News and Fox5 Atlanta, involves a housekeeper named Emily and her daughter, Emma Mae, who—as the story goes—lived at the Windsor. The story changes from telling to telling, but the framework remains similar. It involves a consensual, extramarital relationship in the early twentieth century between Emily and a local politician. Implied in some versions of the story is that Emily and Emma Mae are African American and the politician is white. It ends in double-murder when the politician pushes the mother and child down the elevator shaft. Windsor guests have reported seeing or hearing a ghostly young girl at play in the hallway.

There are no extant historical documents, at present, to corroborate this story. This is not atypical for modern ghost stories. Nor is the content of race, sex, and murder unusual in the recent rise of so-called dark tourism. “Tales about ghosts seem to allow us to entertain the historically grounded social issues that nettle us,” Harvard-historian Tiya Miles writes. “But this engagement occurs at a safe distance by the nature of a particular narrative form, that is, the ghost story, that carries with it a sense of the fantastical and the knowledge that what is said can be taken as fancy rather than fact.” Historical violence against women and children, especially non-white women and children, might be deemed “risky” or “controversial” for a normal tour. They are safely repackaged in the wink-wink of a ghost story.

A second popular ghost story involves a real, identifiable person. Floyd Ardell Lowery (1905-1982) worked as a bellman and elevator operator at the Windsor for half a century. He waited on Franklin D. Roosevelt and had the future-president’s suit pressed in 1928. Today the beautiful bar on the second floor of the Windsor Hotel is named in Floyd’s honor. As with the stories of Emily and Emma Mae, the teetotaling Floyd is described as a helpful curiosity, not a threat. Yet the story of a Black employee who lived with his mother, never drank, worked most of life at the Windsor, and continues to serve in the afterlife makes some ghost aficionados uncomfortable. “Ghost stories involving marginalized people,” Spellman argues, “are often based in, and perpetuate, stereotypes.” Perhaps future research or new ghostly encounters can flesh out a fuller picture of the hotel’s longest-serving employee. 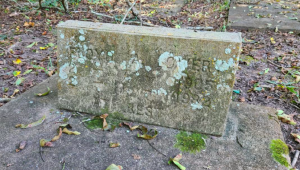 Historians do not have a unified opinion on ghost tourism. Sarah Handley-Cousins, Tiya Miles, and many others who study places of trauma in the past—prisons, battlefields, plantations, asylums—worry that ghost hunters exploit historical subjects for “cheap thrills.” Alena Pirok, in contrast, argues that ghost stories create their own layer of historical significance. “The relationship between ghosts and history is much older than contemporary tours,” she reminds us, “and in most cases, these old tales lack the spooky or violent quality that characterize today’s hauntings.” Ghost stories matter in Pirok’s view because they contributed to the development of a preservation ethic in the early 20th Century.

Interest in ghosts may help preservation in the 21st Century as well. Sharad Patel, owner of the Windsor, did not invent or even encourage the ghost stories that have emerged in the last 25 years. There are benefits as well as costs to running a “haunted” hotel. Some visitors crave the chance for a (friendly) paranormal encounter—and are willing to pay for it. Other guests find the prospect frightening. On at least one occasion, a new employee resigned fearing the ghost of Emma Mae. Most visitors and staff pay the subject no attention.

My dinner in February 2016 ended at a reasonable hour. The faculty were pleasant and I could imagine them as future colleagues. A year before in California, a drunk department chair tried to provoke a fight. “Do you consider yourself a Southerner? Because I hate Southerners,” he asked at dinner. Another professor interjected, “Don’t answer that question!” The memory of the awkwardness that followed still haunted me ten months later, and thankfully the interview in Georgia started off better.

Back in my hotel room, a detail caught my eye. I recalled leaving my light-gray suit in a garment bag flat on the bed. I found it hanging on the bathroom door. Even its plastic dry-cleaning sleeve had been removed. Finding everything else—my laptop, my speaking notes—in their place, I decided I must have spooked myself. Perhaps it was my nerves or a fluke of memory. Nothing more. Do I believe in ghosts? The short answer is “no.” The longer answer though is “maybe.” If personal memories can haunt, then why not our nebulous collective past? Ghosts or no ghosts, I slept well that night in the beautiful and historic Windsor Hotel.