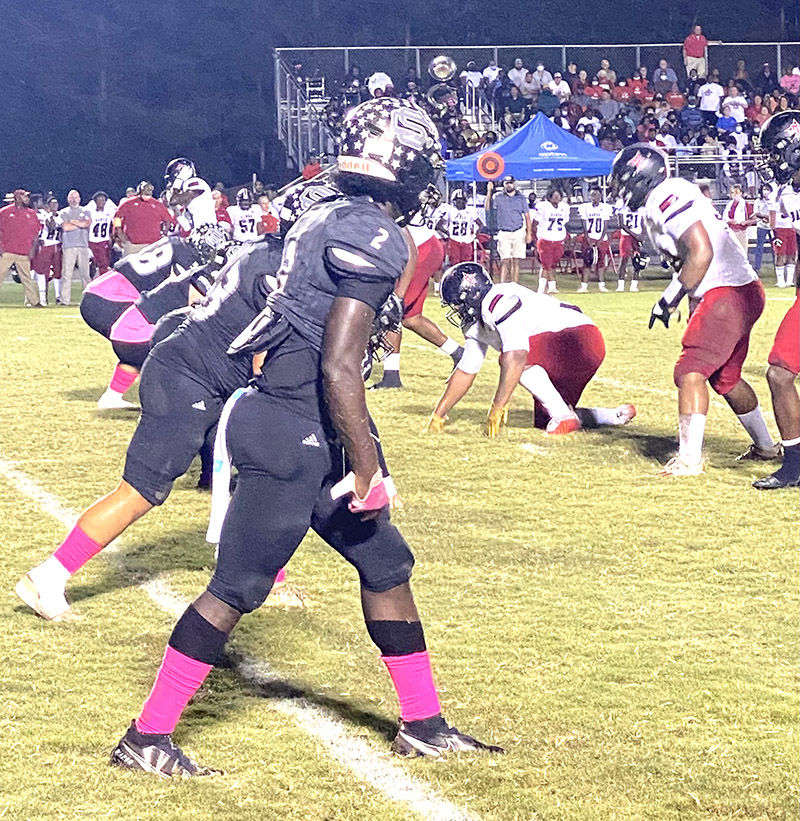 Schley County Sophomore Wide Receiver JaLewis Solomon (#2) is on the line of scrimmage ready to make a big play for SCHS. Solomon caught six passes for 114 yards and four touchdowns and tallied an interception for a pick six in the Wildcats’ 54-38 loss to Macon County. Photo by Ken Gustafson

ELLAVILLE – It was a game befitting two of the top teams in the state in the Georgia High School Association (GHSA) Class A-Public Division . Both the Schley County Wildcats (SCHS) and the Macon County Bulldogs (MC) came into this game undefeated at 5-0 on the season.  The Bulldogs came into this game ranked #3 in Class A-Public and the Wildcats came in ranked #5, but only one would emerge victorious. For the entire game, both teams engaged in an offensive track meet, as both would score on almost every offensive possession. Both teams also made big plays on the defensive side of the ball by forcing turnovers.  However, the Bulldogs intercepted SCHS quarterback Jay Kanazawa twice. One of those interceptions went for a pick six and the other would lead to a touchdown for MC late in the game. Those two plays, among others, proved to be the difference in the Wildcats’ 54-38 loss to MC on Friday, October 8 at Wildcat Stadium on Breast Cancer Awareness Night.

The SCHS players were wearing pink socks and pink undershirts in recognition of this special night in honor of those who have succumbed to and are still fighting breast cancer.

With the loss, SCHS drops to 5-1 on the season and 3-1 in the Region 5A-Public standings, while MC stays undefeated on the season at 6-0 and is 4-0 in region play.

Kanazawa completed 13 of 29 passes for 270 yards, four touchdowns and two interceptions. SCHS Wide Receiver JaLewis Solomon had one of the best games of his career Friday night. The sophomore wide out caught six passes for 114 yards, with four of those receptions being for touchdowns. Solomon also scored another touchdown as a defensive back when he intercepted a pass and ran the ball back 44 yards for a pick six (touchdown). Junior WR Clinton Jackson had four receptions for 92 yards and freshman running back Zayden Walker rushed for 42 yards on 17 carries and caught two receptions for 49 yards.

Both teams scored as the result of big plays in the first half. The Wildcats got on the board first when Kanazawa threw a short screen pass to Solomon, but Solomon was able to use his speed to leave the MC defense behind and ran the ball 60 yards for a touchdown. The extra point by Javier Lopez was good and the Wildcats had an early 7-0 lead with 10:25 to go in the first quarter. 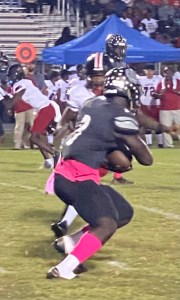 Schley County Freshman Running Back Zayden Walker (#3) rushed for 42 yards on 17 carries and caught two passes for 49 yards in the Wildcats’ 54-38 loss to Macon County.
Photo by Ken Gustafson

However, a few minutes later, the Bulldogs countered when quarterback Landon Austin threw a long pass to Jolan Hannor down close to the SCHS 10-yard line. A couple of plays later, running back Marlon Mitchell scored from seven yards out. The extra point was good and the score was tied at 7-7 with eight minutes left in the first quarter.

The Wildcats were unable to mount a drive on their next possession and the Bulldogs were able to take advantage when Austin connected with Marcus Sanders for a 55-yard touchdown pass. The extra point was good and MC had a 14-7 lead with 5:39 to go in the first quarter.

The SCHS offense responded with another drive and was able to move the ball down inside the MC 20. However, the drive bogged down and the Wildcats were forced to try a 35-yard field goal. Lopez’s field goal was good, but a personal foul penalty was called against the Bulldogs and SCHS had a golden opportunity for a touchdown with first and goal at the MC 7-yard line. Unfortunately for the Wildcats, they weren’t able to capitalize and had a to settle for a 26-yard field goal by Lopez. With 1:34 to play in the first quarter, SCHS had cut its deficit to 14-10.

However, on the next SCHS offensive possession, Kanazawa’s pass was picked off by Sanders, who ran the ball back for a pick six. The extra point was no good, but MC had a 20-10 lead with 9:25 left before halftime.

That unfortunate turn of events did not shake the confidence and resilience of the Wildcats. In the closing minutes of the first half, Kanazawa was able to lead the offense on a drive down to the MC 24-yard line. Then Kanazawa found Solomon in the end zone for a 24-yard touchdown pass. The extra point by Lopez was good and SCHS was back in business, trailing 20-17 with 3:47 left before the half.

The Bulldogs were able to mount a drive down inside the SCHS 20-yard line during the last minute of the half, but as the seconds ticked down, SCHS outside linebacker Luke Forehand recorded two sacks of Austin to end the half.

During the first couple of minutes of the third quarter, the SCHS defense picked up where it left off. The Wildcats returned the favor when Solomon picked off Austin’s pass and ran it back for a pick six. Lopez’s extra point was good and the Wildcats had a 24-20 lead with 10:57 left in the third quarter.

Unfortunately, however, the lead didn’t last long as Mitchell broke through the SCHS defense and scampered 51 yards for another MC touchdown. The extra point was good and the Bulldogs were back on top 27-24 with 10:37 left in the third quarter.

With 6:09 to go in the third, the Wildcats had the ball at their own 35-yard line when Kanazawa threw a screen pass to Solomon, who nearly broke free for a long run for a touchdown. However, Solomon fumbled the ball and it was recovered by the Bulldogs at the SCHS 43-yard line.

However, the Wildcat defense stepped up again. They held the Bulldogs on their first three downs. Then on fourth and 10 from the SCHS 43, Austin’s pass into the end zone was knocked away by SCHS defensive back Carson Westbrook. The ball was turned over on downs and the Wildcats were able to move the ball down into MC territory when Kanazawa connected with Clinton Jackson on a long pass play. Kanazawa would later throw a pass into the end zone that was intended for Solomon, but pass interference was called against the Bulldogs. As a result, the ball was placed at the MC 5-yard line and it was first and goal to go for SCHS. Then on third and goal from the MC 5, the Wildcats regained the lead when Kanazawa rolled to his right and threw a pass to Solomon in the corner of the end zone for another SCHS touchdown. The extra point was good and the Wildcats led 31-27 with 1:34 to go in the third quarter.

However, that lead would be short lived. On the Bulldogs’ next possession, Austin made another big play when he completed a pass to Shelquavious Byse, who scampered 63 yards for a touchdown. The extra point was good and MC regained the lead 34-31 with 18 seconds left in the third quarter. 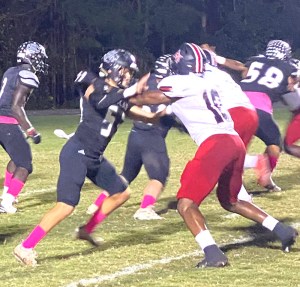 Then with less than 10 minutes to play in the game, the Bulldogs were able to march down to the SCHS 5-yard line when Austin Found Byse on a screen pass. Byse was able to weave his way through traffic and ran the ball down to the SCHS 5. Then on first and goal from the 5, Austin scored on a quarterback keeper. The extra point was no good, but the Wildcats trailed 40-31 with 8:52 left to play.

SCHS got a boost when Carson Westbrook returned the ensuing kickoff to the Wildcats’ 45-yard line. SCHS was then aided by a defensive holding penalty by the Bulldogs and the Wildcats followed that up with a big pass play, as Kanazawa found Clinton Jackson near the MC 20. A couple of plays later, Kanazawa connected with Solomon again for a 12-yard touchdown pass. The extra point by Lopez was good and SCHS trailed 40-38 with 7:15 to go in the game.

On the Bulldogs’ next possession, MC was able to move the ball down into SCHS territory once again. However, once again, when they absolutely needed it, the Wildcat defense came up with a stop on fourth and 12 and the ball went back over the SCHS offense with under three minutes to play in the game.

Throughout this back-and-forth shootout, it became more and more apparent that the team who would have the ball last would be the team that would win.

The Wildcats were not able to mount a drive on their next possession and were forced to punt. It would be up to the defense once again to make another big play in this game. However, the Bulldogs had other ideas. MC was able to orchestrate a drive that ended up inside the SCHS 10-yard line. The Bulldogs ended up finishing the drive off when Mitchell scored a rushing touchdown from eight yards out. The extra point was good and the Wildcats found themselves in a deep hole, trailing 47-38 with 2:08 left.

The Wildcats tried to mount a comeback on their next possession, but hopes of a come-from-behind victory were dashed when Kanazawa’s pass was picked off by MC Linebacker D.J. Jenkins near the SCHS 10 yard line. This turnover allowed the Bulldogs to cement their victory, as Mitchell would later score his fourth touchdown of the night from six yards out. The extra point was good and MC would go on to win this high-octane shootout by the score of 54-38.

Mitchell led the Bulldogs’ offense by rushing for 273 yards on 28 carries and scoring four rushing touchdowns. MC Quarterback Landon Austin completed six of 15 passes for 223 yards, two touchdowns and one interception, while Byse led the MC Receiving Corps with four catches for 121 yards and a touchdown reception.