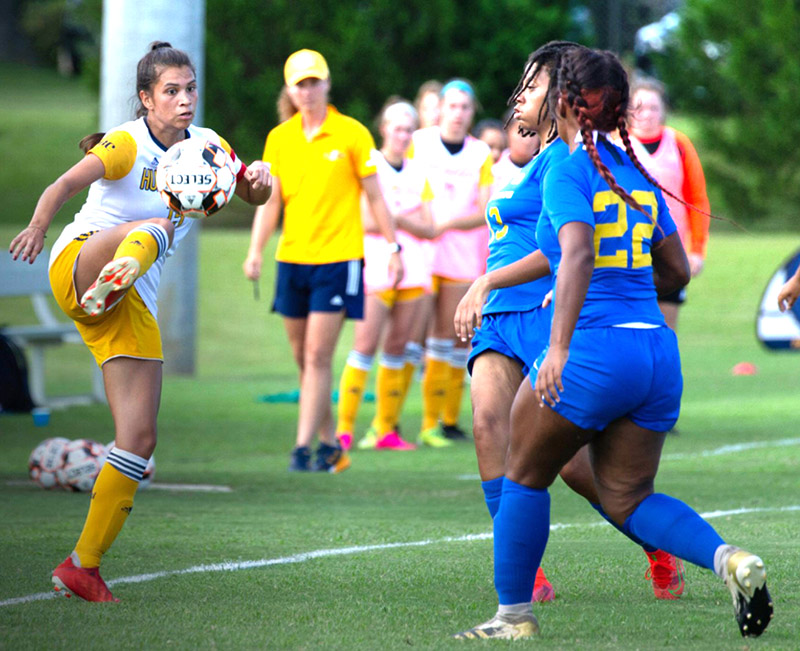 GSW Senior Defender Laura Duran Blanco (#15) tries to control the ball. Blanco is the lone senior on the Lady Hurricanes’ squad and she was honored on Senior Night when the GSW took on the University of South Carolina-Aiken. Photo by Christopher Finn

AMERICUS — The Georgia Southwestern State University Women’s Soccer Team played the Lady Pacers of the University of South Carolina-Aiken to a 1-1 draw on Saturday, October 16 at Hurricane Field on Senior Night. It was a night to honor GSW Defender Laura Duran Blanco, the lone senior on the Lady Hurricanes’ squad.

The game was a defensive battle and the two sides were both scoreless until the 70th minute, when GSW Junior Midfielder Natalie Martinez scored to give the Hurricanes a 1-0 lead.

The Pacers quickly responded with a goal by Mackenzie Cochrane in the 72nd minute to tie the game. Both teams continued their defensive showcase for the two overtime periods, but neither team could break through with a game winner. As a result, the match ended as a 1-1 draw.

The Lady Hurricanes are now 6-5-1 overall on the season and are currently 1-4-1 in the Peach Belt Conference (PBC). They will try to earn their seventh victory of the season on Wednesday, October 20, when they travel down US Highway 19 to take on Albany State in another PBC match. Kickoff is scheduled for 7 p.m.