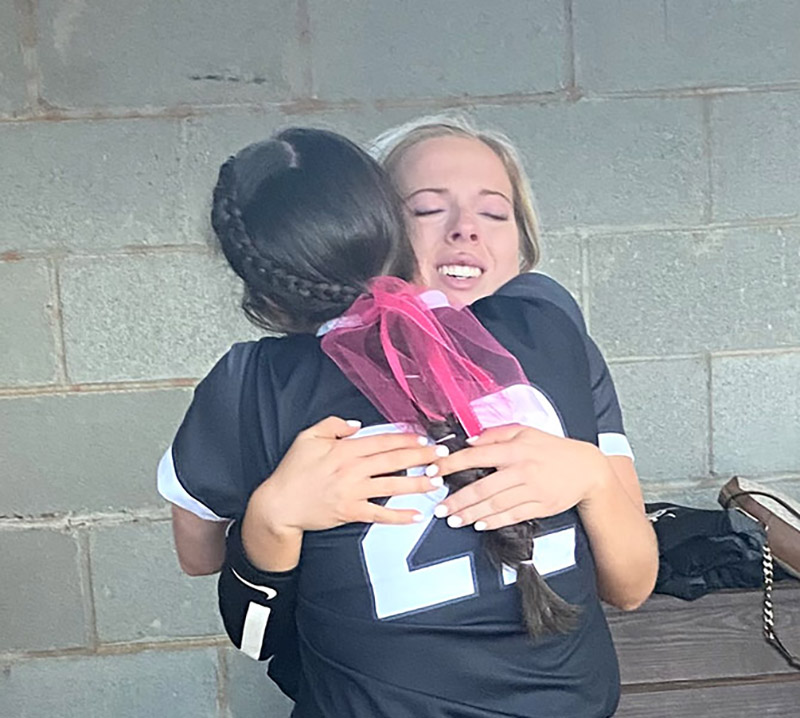 Schley County teammates Landry Whaley and Emma Walker share an emotional embrace in the dugout after the Lady Wildcats were eliminated by Emanuel County Institute in the second round of the GHSA Class A-Public State Playoffs. Photo by Ken Gustafson

TWIN CITY, GA – The Schley County Wildcats Softball Team (SCHS) made the 149-mile trip to Twin City, GA with the hopes of pulling off a massive upset over the Lady Bulldogs of Emanuel County Institute (ECI) in the second round of the GHSA Class A-Public state Playoffs. To do it, they would have to break through the dominance of one of the top pitchers in the state in any classification: ECI’s Charla Clifton.  Though the Lady Wildcats were able to get a total of eight hits off Clifton, errors in the field, along with some timely hitting from the Lady Bulldogs, led to a 6-1 loss for the Lady Wildcats in Game 1 and a hard-fought 3-2 defeat in Game 2 at the hands of ECI on Wednesday, October 20, at the ECI Softball Complex in Twin City, GA.

Having been swept in the best-of-three game series by ECI, the Lady Wildcats conclude their 2021 season with a record of 10-15, but their performance against the 26-3 Lady Bulldogs showed that they are a much better team than their record shows.

“I’m really proud of my girls. We told them that we want to come compete for 14 innings and I feel like we competed at a high level,” SCHS Head Coach Jody Sellers said. “We made their pitcher (Clifton), who is absolutely one of the best pitchers in the state, work her tail off. We did a great job battling. In Game 1, we had a few opportunities, and if we clean up one inning, it’s a tight ball game, but we still had our chances and competed well. In Game 2, I couldn’t be more proud. We were in a good situation, but like I said, you tip your hat. They came through with a big hit. They had some runners on there in the top of the seventh and manufactured a run and did what they had to do. Coach Frank Wimberly does a great job with them. I’ve known him for years. It’s a great ball club. He does a great job coaching and when you happen to have a girl in the circle like that to go with good coaching, you are a quality team and a quality program. I’m really proud of my girls for coming here and competing and giving them everything we had. On the season, the win-loss record wasn’t what we wanted it to be. We wanted to win 20 games. We’ve had a lead in so many of our losses and just couldn’t come through. That was a lot of adversity at the beginning of the year and I think it paid off down the road. I didn’t think we were rattled in the playoffs. In big situations, we were calm, cool and collected. We were unfortunately on the wrong end of the scoreboard, but over all, I’m proud of my girls for the year. They work hard and battle.”

As for the Lady Bulldogs, they will advance in the state playoffs to face Gordon Lee in Columbus on Saturday, October 28.

In both games, the Lady Wildcats combined for three runs on eight hits, as Clifton was still able to post a dominating performance with a total of 17 strikeouts on the day.

In Game 1, the Lady Bulldogs got on the scoreboard first in the bottom of the second when Kayanna Thompson drove in a run on an RBI single, but the Lady Wildcats were able to tie the score at 1-1 in the top of the fourth when Destiny LeCroy drove in Berkley Goodin on an RBI double to centerfield. 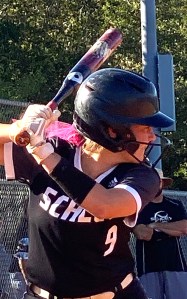 Schley County shortstop Destin LeCroy went 1 for 3 in Game 1 with an RBI against ECI.
Photo by Ken Gustafson

However, the Lady Bulldogs responded in the bottom of the fourth with four runs on three hits and took advantage of an error, two walks and a hit batsman. The big blow in the inning came off the bat of Thompson, who drove in two runs on an RBI single. Later on in the inning, Kayla Harper drove in ECI’s fourth run of the game on an RBI double to centerfield. It was this inning that proved to be the defining inning of Game 1.

Though the Lady Wildcats tried their best to get back in the game, they were unable to get many runners on base against Clifton. Later on in the bottom of the sixth, as the result of a walk and an SCHS error, ECI scored two more insurance runs and would go on to win Game 1 by the score of 6-1.

Goodin, LeCroy, Liberty Justice and Emma Walker each earned a hit in Game 1.

Lizzie Barineau got the start in the circle for the Lady Wildcats in Game 1. In six innings of work, Barineau gave up six runs on six hits, walked three batters and struck out two.

In Game 1, Clifton gave up one run on four hits, walked one batter and struck out 10 in helping to lead ECI to the win. 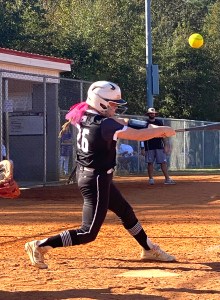 Schley County centerfielder Maddie Walker tries to make contact. Walker scored a run and reached on a walk in Game 1 against ECI.
Photo by Ken Gustafson

Having dropped Game 1 of this best-of-three-game series, the Lady Wildcats found themselves on the brink of elimination once again, just as they had against Glascock County in the opening round of the state playoffs the week before. It was do or die for Schley in Game 2 and the Lady Wildcats would be the home team in this potentially season-ending second game.

In the top of the first, the Lady Bulldogs jumped out to a 2-0 lead, but it all started with two outs in frame. Shayla Stephenson singled off SCHS starting pitcher Makenna Wurtz. Then Lily Robertson singled to centerfield, putting runners at first and second for ECI. Macy Canady then drove in the first run of the game on an RBI single to centerfield and Sullee Bodiford drove in ECI’s second run on an RBI single.

Fortunately for the Lady Wildcats, Wurtz was able to strike out Williams to prevent further damage. 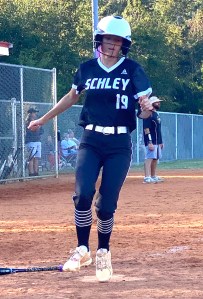 In the bottom of the first, the Lady Wildcats fought back. After a leadoff single by Zoe Molina and a sacrifice bunt by Maddie Walker, Landry Whaley drove in courtesy runner Mackenzie Pugh on an RBI single, bringing SCHS to within one run at 2-1.

In the bottom of the fourth, the Lady Wildcats tied the score at 2-2. Maddie Walker began the frame by drawing a walk and would later advance to second on a wild pitch. With one out and a runner at second, Berkley Goodin came through with the game-tying single. Clifton was able to retire both LeCroy and Wurtz to end the inning, but the Lady Wildcats were very much alive with the score tied at 2-2. 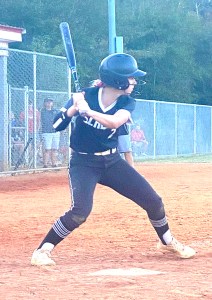 Schley County third baseman Landry Whaley went 1 for 3 with an RBI in Game 2. that RBI came on a single in the bottom of the first that drove in Mackenzie Pugh for the Lady Wildcats’ first run of the game.
Photo by Ken Gustafson

In the top of the fifth inning, the Lady Bulldogs had a golden opportunity to retake the lead when Clifton belted a one-out triple. Kayla Harper was then hit by a pitch and ECI had runners at first and third with one out. Wurtz got Shayla Stephenson to hit into a fielder’s choice, but loaded the bases when she walked Lily Robertson. However, when her team needed it the most, Wurtz came through by getting Macy Canady to pop out to end the threat.

In the bottom of the fifth, the Lady Wildcats gave themselves a chance to take the lead when Barineau led off the frame with a single, but Justice struck out and Emma Walker hit into a double play to end the inning.

During the sixth inning, both Wurtz and Clifton kept the offenses quiet, setting the stage for the decisive seventh inning. 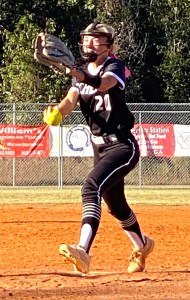 Schley County Junior Pitcher Makenna Wurtz pitched all of Game 2 and gave up just three runs on eight hits to keep the Lady Wildcats within striking distance against ECI.
Photo by Ken Gustafson

In the top of the seventh, things started off well for SCHS, as Wurtz struck out Thompson for the first out. However, Clifton was able to make it to second on an error that ended up proving to be costly for the Lady Wildcats. Kayla Harper then singled to centerfield and Clifton would later score on another error to give the Lady Bulldogs a 3-2 lead. Wurtz was able to retire Robertson and Canady in order to limit the damage and give her team one last chance to save its season.

However, there would be no magical comeback victory on this day for SCHS. Clifton was able to strike out Goodin for the first out and got both LeCroy and Wurtz to pop out to end both Game 2 and the Lady Wildcats’ season.

Molina, Whaley, Goodin and Barineau each earned a hit in Game 2 for SCHS. Wurtz, who pitched all of Game 2 for the Lady Wildcats, gave up three runs on eight hits, walked one and struck out one. 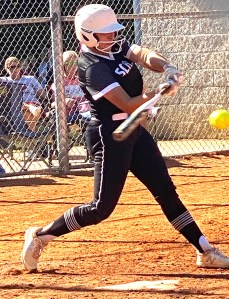 Schley County catcher Zoe Molina went 1 for 3 with a single in the Lady Wildcats’ 3-2 loss to ECI in Game 2.
Photo by Ken Gustafson

Clifton had another strong performance for ECI in Game 2. She gave up two runs on four hits, walked one and struck out seven. Shayla Stephenson led the Lady Bulldogs’ offense in Game 2 by going 2 for 4 with two singles.

“We always expect a god game against Schley, but that was the toughest game we’ve played all season, top to bottom, against a great Schley County team,” ECI Head Coach Frank Wimberly said. 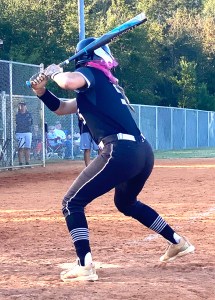 Schley County first baseman Berkley Goodin, one of four seniors on the SCHS squad, went 1 for 3 with an RBI in Game 2 against ECI.
Photo by Ken Gustafson

The Lady Wildcats will be losing four seniors: Maddie Walker, Liberty Justice, Berkley Goodin and Landry Whaley, but will be returning everyone else. That bodes well for the Lady Wildcats and their fans when another exciting season of Schley County Softball gets started in August of 2022.