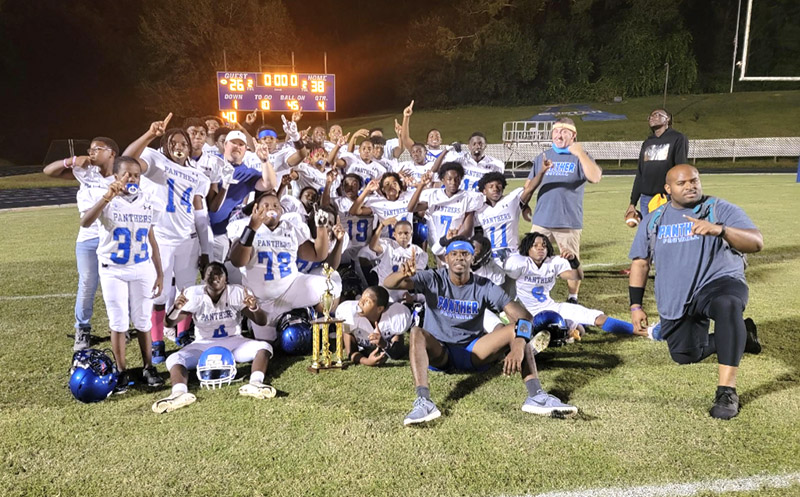 AMERICUS – In a battle of two undefeated football teams, the Sumter County Middle School Panthers (SCMS) hosted the Lee County East Trojans (LCE) in the Deep South Conference Football Championship on Wednesday, October 20, at Alton Shell Stadium in Americus. Both teams entered the game with identical records of 5-0-1, but thanks largely to a superb performance from SCMS Quarterback Aaron Kearse, the Panthers were able to outscore the Trojans in a high-scoring affair and went on to win the Deep South Conference Championship over LCE by the score of 38-26.

The last time the SCMS Panthers won the Deep South Conference title in football was in 2013.

was in 2013. According to SCMS Head Coach Michael Batts, winning the title was the culmination of a lot of heart and a willingness to overcome adversity, especially with the difficulties of navigating through the season in the midst of COVID-19.

“Throughout the season, we had a lot of heart and a lot of resilience because, or se we would get ready to play a game and it would get canceled because of COVID or weather,” Batts said. “Actually, things that you think hurt you sometimes ended up helping. By playing two or three games at the end, we got our feet up under us. Last night’s game was a hard-fought game. Lee County did a great job. They kept coming back at us with play after play and scoring and we had to keep scoring. But our kids showed a lot of heart. I think the fans made a difference. Having all the fans there, playing at home. All of that was just a huge benefit for us, but overall, this team has a lot of heart and they were determined and wanted to win.”

SCMS won the toss and elected to defer.  LCE took advantage by taking the opening kickoff back to their own 40-yard line, giving themselves excellent field position. On the Trojans’ first play from scrimmage, LCE Quarterback Bryce Carter completed a 60-yard touchdown to Lasiah Jackson. The two-point try was no good, but the Trojans had an early 6-0 lead. However, that would be the last time LCE would have the lead in this contest.

On their first possession of the game, the Panthers took the ball and marched down to the 30-yard line before Kearse threw a 30-yard touchdown to Amari Hubbard. Kearse completed the two-point try, making the score 8-6 in favor of SCMS.

On the ensuing kickoff, the Panthers’ kickoff specialist, Traven Jordan, successfully executed an on-side kick and it was recovered by Kendall Jones, who played with a broken hand. The SCMS Offense was able to move the ball all the way down to the LCE 14-yard line. Then Kearse completed another touchdown pass to Austin Jones.  The two-point try was no good, but the Panthers had a 14-6 lead.

LCE fought back and scored on their ensuing drive, as Carter scrambled up the middle for a 50-yard touchdown run. The two-point try failed, but the Trojans only trailed the Panthers 14-12.

On the next SCMS drive, Kearse took a sweep around the left side for a 30-yard touchdown. The two-point attempt failed, but the Panthers had increased their lead to 20-12.

On the Trojans’ next possession, the SCMS Defense forced a turnover when Omari Woodard intercepted a pass. The Panther Offense went to work and moved the ball all the way down to the Trojans’ 5-yard line before stalling out on the drive. LCE then began to march down the field on their way to tie or take the lead. On third and goal from the LCE 6-yard line, the Trojans tried a pass that was intercepted by Kearse and returned two yards to the Panthers’ 8-yard line. With only 40 seconds left in the first half, the Panthers were looking to run the clock out and go to halftime with the lead, but the Panthers’ Quay Tatum had other Ideas and broke loose for a 92-yard touchdown run, making the score 26-12 SCMS.

However, the Trojans were not willing to go into halftime without a response and they answered back on their next play from scrimmage when Carter threw a 51-yard touchdown pass to Jeffrey Anderson, making the score 26-18 SCMS at the half.

The panthers got the ball to start the second half and they were able to chew up some clock before Kearse scored again.  This time, he took a pitch from the running back position for a 30-yard touchdown run to make the score 32-18 Panthers.

The Trojans were stopped on their next possession and SCMS took advantage when Kearse, who lined up as a receiver, caught a 34-yard touchdown pass, making the score 38-18 SCMS.

Unfortunately for LCE, Carter was forced to leave the game due to injury and Jervaih Martin came in to play quarterback for the Trojans. However, Martin rose to the occasion and threw a deep pass that was deflected and caught by Zac Hall for a 48-yard touchdown, making the score 38-26 SCMS.

However, that would be as close as the Trojans would get and the Panthers would go on to win their first Deep South Conference Championship in football since 2013.

SCMS finishes its season undefeated with a record of 6-0-1.  During their championship season, the Panthers outscored opponents 130 to 40.