The 8U Florida Gators celebrate after defeating the 8U Georgia Bulldogs 25-0 to win the SCPRD 8U championship. Photo by Ken Gustafson

AMERICUS – Running Back Avienn Gonzales scored three touchdowns and Caden Jordan scored another touchdown on an 80-yard run from scrimmage to lead the 8U Florida Gators to a 25-0 victory over the Georgia Bulldogs in the championship game of the 7/8-year-old division of the Sumter County Parks and Recreation Department (SCPRD) Youth Football League.

The Gators finished the season with a perfect, undefeated record of 10-0. 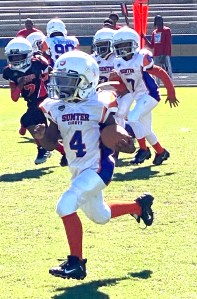 The 8U Gators’ Caden Jordan (#4) breaks past the Bulldogs’ defense and rumbles 80 yards for a touchdown.
Photo by Ken Gustafson

Gonzales scored the first of his three touchdowns early in the first quarter to give the Gators a 6-0 lead, but Caden Jordan would add to the Gators’ lead by breaking through the Bulldogs’ defensive line and running 80-yards for a touchdown.

The 8U Georgia team struggled offensively due to the tenacious play of the Gator defense. This gave the Florida offense more chances to score and the Gators were able to take advantage, as Gonzales was able to score two more touchdowns to salt away the 25-0 victory and league championship for the Gators. 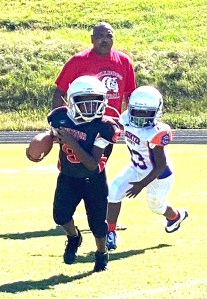 8U Bulldogs quarterback O’Marion Robinson runs for yardage on a quarterback keeper.
Photo by Ken Gustafson

In addition to Gonzales’s performance on the offensive side of the ball, he also came up with an interception against the 8U Bulldogs.