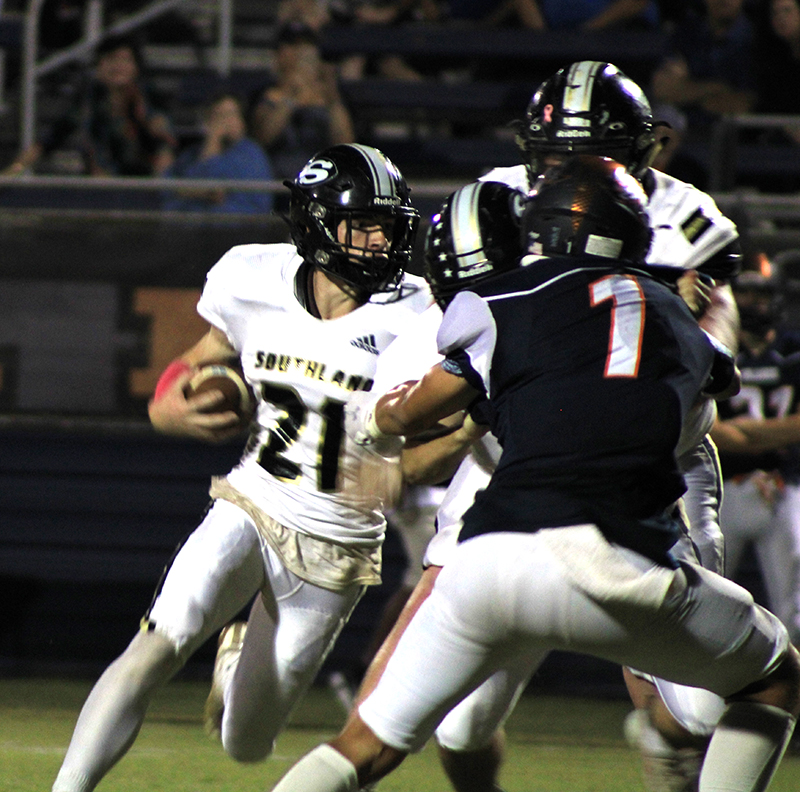 Southland Running Back Hudson Collins fights for yardage against Valwood. Collins scored one of the Raiders’ three rushing touchdowns in their 23-6 win over the Valiants. Photo by Kayla Hudgins

VALDOSTA – The Southland Academy Raider Football Team (SAR) traveled down to Valdosta, GA on Friday, October 22, and defeated the Valwood Valiants in dominating fashion by the score of 23-6 to earn their third straight win of the season.

The Raiders got rushing touchdowns from David Dickens, John Saye and Hudson Collins and forced a safety late in the game to secure their 23-6 victory.

The Valiants took a 6-0 lead in the second quarter, but SAR responded when fullback John Saye scored the Raiders’ first touchdown of the game. The extra point by Caleb Law was good and SAR led 7-6 at halftime. 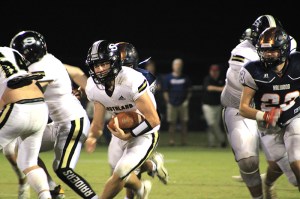 Southland Running Back David Dickens motors for the Raiders. Dickens scored the second of the Raiders’ three rushing touchdowns against Valwood.
Photo by Kayla Hudgins

However, in the second half, the Raiders broke the game open. The SAR Offense was able to move the ball down the field and capped off its drive with a rushing touchdown from running back David Dickens. Law’s extra point was good and the Raiders led 14-6.

The Raider defense continued to stifle the Valiants’ offense, which gave SAR more chances to increase its lead. The Raiders would do just that when running back Hudson Collins scored a rushing touchdown. Law’s extra point was good and SAR led 21-6. 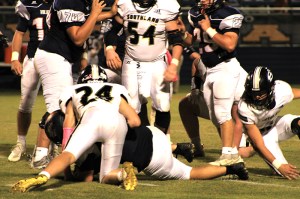 Southland Defensive Tackle John Saye makes a tackle against Valwood. Saye was used as a fullback on the offensive side of the ball and he scored one of the Raiders’ three rushing touchdowns in their win over the Valiants.
Photo by Kayla Hudgins

That would be all for the Raiders’ offensive scoring, but the defense was able to earn a safety against the Valiants. As a result, SAR left Valdosta with a 23-6 victory.

With the win, the Raiders are now 5-3 overall on the season and are 1-0 in Region 3-AAA competition. Valwood drops to 2-6.

Up next for SAR is another road trip south down to Chula, GA near Tifton on Friday, October 29, to take on the Panthers of Tiftarea Academy (3-5, 0-1 in region play).  Kickoff is scheduled for 7:30 p.m.