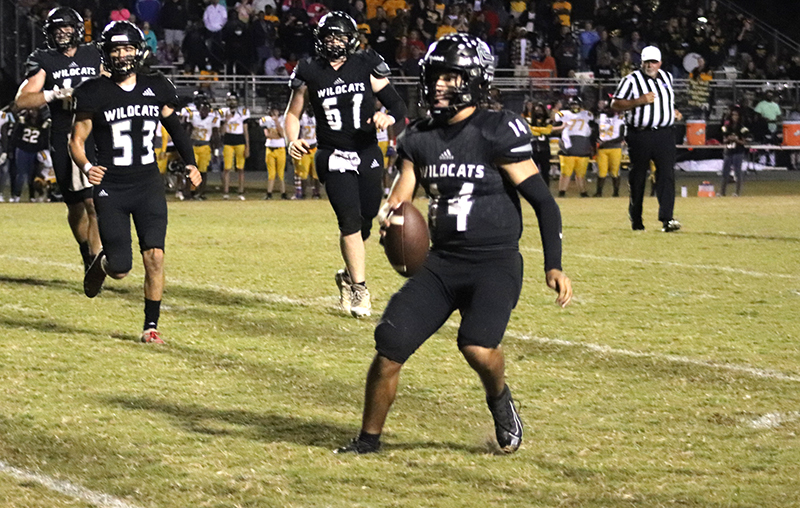 Schley County quarterback Jay Kanazawa (#14) completed 15 of 27 passes for 222 yards and threw two touchdown passes to lead the Wildcats to a 20-19 come-from-behind victory over Chattahoochee County. Photo by Kaia McLennan

ELLAVILLE – The Schley County Wildcats (SCHS) capped off a thrilling back-and-forth affair against the undefeated Panthers of Chattahoochee County (CC) when SCHS quarterback Jay Kanazawa threw a 15-yard touchdown pass to JaLewis Solomon with 1:02 to go in the game, making the score 20-19 in favor of the Wildcats. The two-point try was no good, but the defense was able to stop the Panthers with a little over a minute left and preserve the 20-19 come-from-behind victory for SCHS.

“I am very happy with the way our team responded to adversity,” SCHS Head Coach Darren Alford said. “We got down early in the game, but our young men accepted the challenge and out played them. I told them that this will be an effort game and we played with tremendous effort all night. Both of our offensive and defensive lines were undersized compared to them, but they played great and won the battle in the trenches,” Alford Continued. 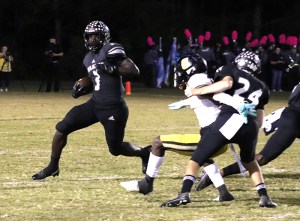 Schley County running back Zayden Walker (#3) tries to explode past the Chattahoochee County defense. Walker rushed for 97 yards on 22 carries and scored a rushing touchdown in the win over the Panthers.
Photo by Kaia McLennan

Kanazawa had a solid night at the controls for the Wildcats. The sophomore quarterback completed 15 of 27 passes for 222 yards and threw two touchdown passes, along with one interception.

The Wildcats had another solid night on the ground as well, as freshman running back Zayden Walker toted the rock for 97 yards on 22 carries and scored a rushing touchdown.

As far as receiving was concerned, Solomon had another tremendous performance for SCHS. The sophomore wide out caught seven passes for 97 yards, including one for a touchdown, and junior Luke Forehand caught one pass for 17 yards, but that one catch went for a 17-yard touchdown reception. 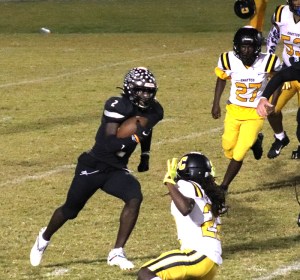 Schley County wide receiver JaLewis Solomon (#2) caught seven passes for 97 yards, including one reception for a touchdown. Solomon also returned a kickoff all the way back to the CC 25-yard line, which would lead to the winning score for the Wildcats with 1:02 to go in the game.
Photo by Kaia McLennan

On the defensive side of the ball, both Zayden Walker and Quentin Edwards each had one sack, with Walker’s being for a four-yard loss. JaLewis Solomon came up with an interception and safety Carson Westbrook tallied a total of 11 tackles in the contest, while Sidney Blackwell had a total of nine.

The Panthers drew first blood with 7:10 to go in the first quarter when Trenton Hodges recovered a fumble and scampered 73 yards the other way for a touchdown.  The extra point was good and CC led 7-0.

Later on in the second quarter, the Wildcats responded when Kanazawa completed a 17-yard touchdown pass to Luke Forehand with 4:57 to go before halftime. The extra point by Javier Lopez was good and the score was tied at 7-7 at the half.

However, with 8:37 left in the third quarter, the Panthers regained the lead when Hodges recovered another fumble and ran the ball back 72 yards for a touchdown. The extra point attempt was blocked, but CC had regained the lead 13-7.  That blocked extra point, among other things, proved to be a crucial play in the outcome of the contest. 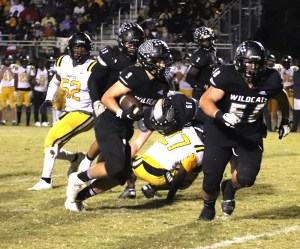 The Wildcats rose to the occasion with 4:56 left in the third quarter, as they were able to orchestrate a drive that ended up at the CC 3-yard line. Walker then scored from three yards to tie the game and Lopez kicked the extra point to give SCHS a 14-13 advantage.

It was a defensive battle between both teams for the remainder of the third quarter and through much of the fourth, but the Panthers regained the lead 19-14 with 3:13 to go in the game when CC running back Jamyran Thomas scored from seven yards out. However, a 15-yard personal foul penalty was called against the Panthers after the touchdown, which meant that on the ensuing kickoff, instead of kicking off from its own 40-yard line, which is where the kicking team normally kicks from, CC would have to kick off from its own 25-yard line. That penalty, coupled with the fact that CC’s two-point conversion attempt failed, was another crucial factor in the outcome of the game.

On the Panthers’ ensuing kickoff from their own 25-yard line, Solomon returned the ball for the Wildcats all the way back to the CC 25, giving SCHS great field position from which to score the winning touchdown. The Wildcats were able to move the ball down to the CC 15-yard line before Kanazawa completed a 15-yard touchdown pass to Solomon to give SCHS a 20-19 lead with 1:02 to go. The Wildcats tried to go for two and failed, but the defense was able to stop the Panthers on their last possession to preserve the 20-19 come-from-behind victory for the Wildcats.

The Wildcats have two more games left in the regular season. Both of those games are on the road and they are both region contests. SCHS will travel to Manchester on Friday, October 29, to take on the Manchester Blue Devils. Kickoff is scheduled for 7:30 p.m. Then on Friday, November 5, the Wildcats will conclude the regular season when they travel to Talbotton to take on the Central (Talbotton) Hawks. Kickoff for that game is scheduled for 7:30 p.m.