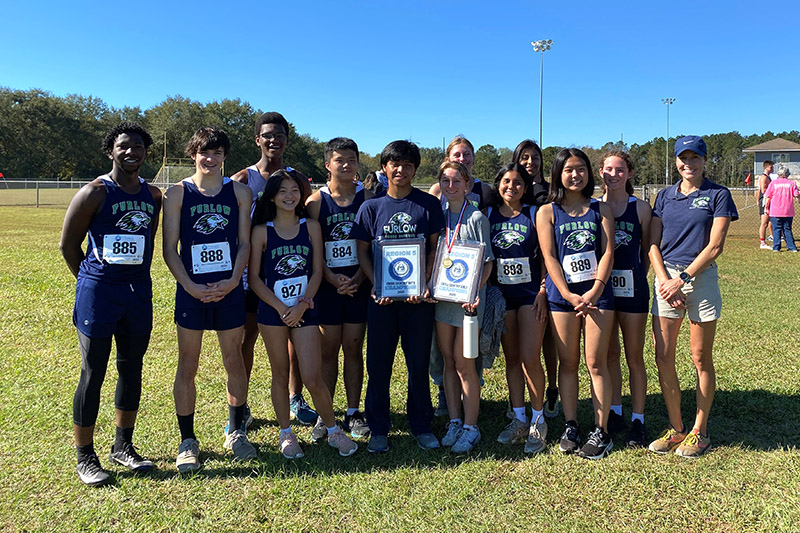 AMERICUS – It was a great day for both the Furlow Charter (FC) and Schley County (SCHS) boys and girls XC (Cross Country) teams. The Falcons and Lady Falcons claimed the Region 5A-Public Championship and the Wildcats and Lady Wildcats finished the meet as the region runners-up at the GHSA Region 5A-Public Meet held on Tuesday, October 26, at the Sumter County Parks and Recreation course here in Americus. 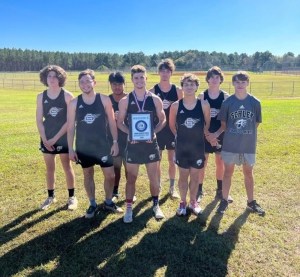 The Lady Falcons won their region championship with just 15 points, as they were able to beat out the Lady Wildcats, who accumulated 50 points. In Cross Country, the team goal is to accumulate the fewest points possible. 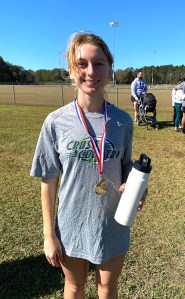 Furlow Charter sophomore Maria Kilheffer won the girls’ race at the Region 5A-Public Meet and finished in a time of 22:56.05.
Photo by Crystal Kilheffer

FC also took the top spot in boys’ action as well, winning the Region 5A-Public Boys’ Championship with 22 points. The Schley County Wildcats finished as the region runners-up with 33 points. Schley County senior Dustin Howard won the individual boys’ region championship, crossing the finish line first in a time of 19:17.17. “It feels great to be the region champ and in all my six years of running, it is a great blessing and accomplishment to reach this goal,” Howard said. 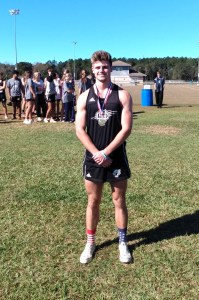 Though he is pleased with being a region champion, Howard has his sights set on a bigger goal at the GHSA State Meet in Carrollton in a couple of weeks. He knows that there is still more room for improvement and more work to be done between now and then. “I believe I could improve my game by putting some speed work into my lungs and legs to better my strength and endurance,” Howard said.

The Falcons’ Edmund Chen followed Barker, crossing the line in a time of 26:32.66. 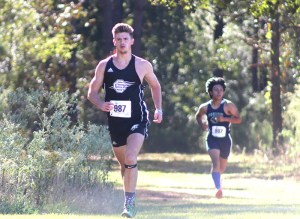 Schley County senior Dustin Howard (in front) tries to fend off Edwin Gonzalez of Furlow Charter (behind) at the Region 5A-Public Meet. Howard won the region championship and Gonzalez finished as the region runner-up.
Photo by Kaia McLennan

Several of these runners on both the FC and SCHS teams turned in PRs (personal best times) at this region meet. For the Falcons, Apollo Huss and Jaylen Deriso both turned in new PRs, and for the Lady Falcons, Maria Kilheffer, Addison Drinnon and Jacklyn Chen each turned in a new PR in this race.

As for SCHS, three Wildcats were able to post PRs at the region meet: Hudson Barker, Austin Graham and Miguel Yanez-Rueda.

“I am very proud for our boys and girls runners. They have worked hard throughout the year and have seen their times drop several minutes from the first meet until now,” SCHS Head Coach Scott Burgess said. “I am glad that they will be able to finish their season at the State Meet next Saturday in Carrollton. I am extremely proud for Dustin Howard, as he has been an extremely hard worker in cross country and track dating back to middle school.  He has been a great captain and leader this season as the vast majority of our runners this year are first-year runners,” Burgess continued.

By virtue of placing first and second in the region meet, the girls and boys XC teams of both Furlow Charter and Schley County have qualified for the GHSA Class A-Public State XC Meet, which will be held on Saturday, November 6, at Carrollton High School in Carrollton, GA. The girls’ race is scheduled to begin at 2 p.m., followed immediately by the boys’ race.